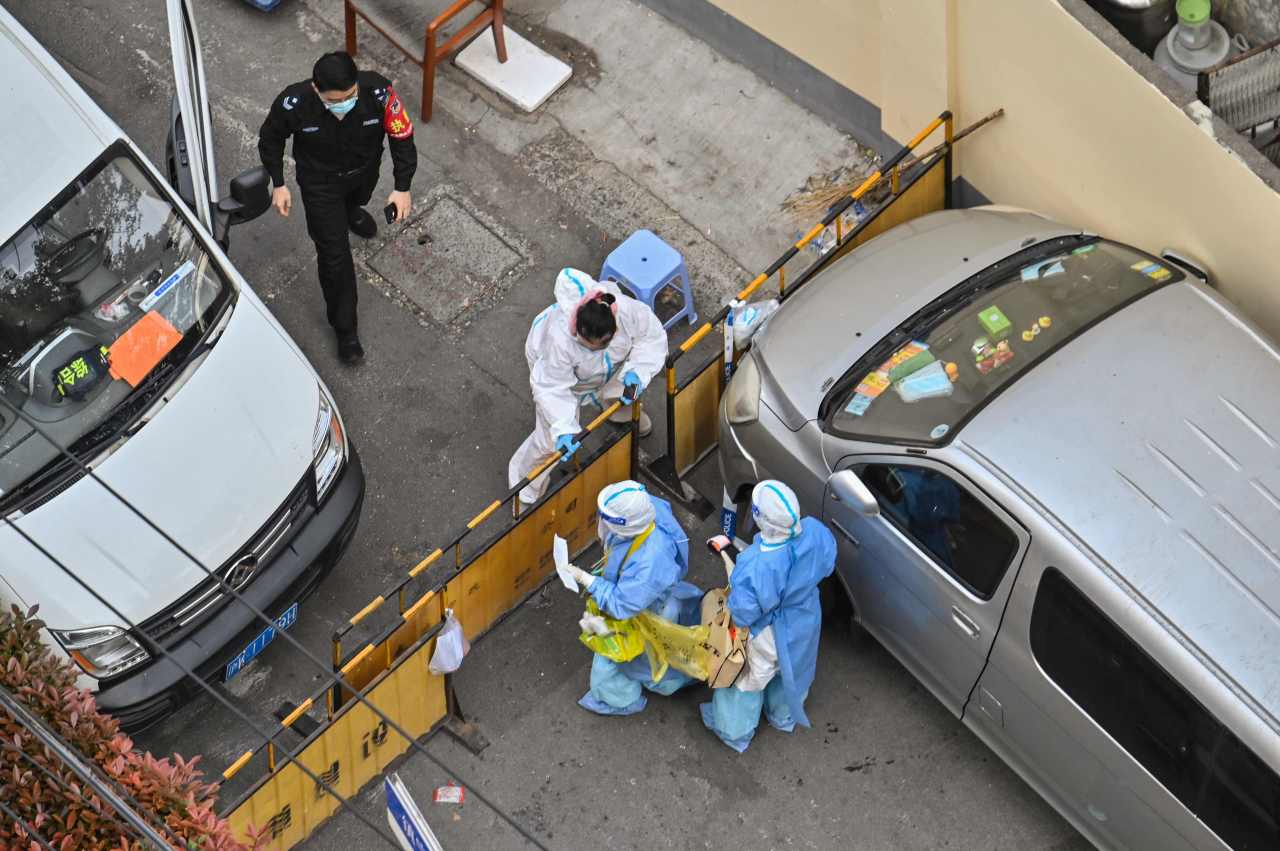 Health workers, wearing personal protective equipment, stand at a check point next to a neighborhood during a COVID-19 lockdown in the Jing'an district in Shanghai on Friday. (AFP-Yonhap)
South Korean companies are keeping a wary eye on looming supply chain disruptions and slowing consumer electronics demand as the pandemic lockdown in China shows no signs of ending.

While there are signs that the severe lockdown and fast spreading coronavirus in the Chinese port city Shanghai could spread to other cities, including port city Guangzhou, prospects of the slowing demand of consumer electronics -- especially in China -- is adding to the concerns.

The lockdown in Shanghai, beginning late March, shows little sign of abating for the time being, with its residents forced to be mass-tested daily and road travels being restricted until at least the end of April. Meanwhile, Guangzhou reverted to online learning for students and mass PCR testing for all residents.

Korean electronics firms including memory chip maker SK hynix and display panel maker LG Display are watching the situation closely, although the companies say the lockdown would not immediately lead to suspension of operations there.

SK hynix operates a plant in Wuxi, a city some 120 kilometers west of Shanghai. The plant is known to be responsible for half of the company’s DRAM chip production. LG Display runs an organic light-emitting diode panel manufacturing plant in Guangzhou.

In the meantime, analysts are lowering the target share price of Korean companies, as they might be already bearing the brunt of the fallout due to diminishing demand.

“We see lower demand visibility for memory semiconductors for the second half of 2022 amid continued macro uncertainties,” Kim noted, adding China’s lockdown measures and the consequential supply chain disruptions are one of the uncertainties.

According to Kim, memory chip demand from server clients in North America will remain largely unaffected, but such demand will fall short of offsetting the decline in demand for memory chips in PCs and smartphones.

“We attribute recent weakness in the share price performances of global memory chip manufacturers to doubts over whether the rebound in memory chip prices will continue in the second half,” he added.

The estimate came a week after Nam Dae-jong, an analyst at eBest Investment & Securities, cut the target stock price of LG Display -- the world’s de facto sole OLED panel supplier for TV set makers -- by 23 percent to 20,000 won per share.

“China’s coronavirus that flared up in Xi’an at end-2021 has led to a lockdown of other cities including Shanghai in March, further dampening demand for IT products since the Chinese New Year holiday,” Nam noted, referring to the lockdown in central China that caused Samsung Electronics chip operation to be suspended for a month.

With stringent virus prevention measures in place under China’s so-called “zero-COVID” policy, global demand for electronics goods for end users -- including smartphones, TVs and personal computers -- is projected to remain weak throughout this year.

Components that were originally oversupplied, including multilayer ceramic capacitors that are used to regulate electric flow in a circuit as well as semiconductor chips, will face more severe price tests due to the imbalance between supply and demand, noted TrendForce analyst Avril Wu.

“Due to the accelerated recent spread of the omicron variant in China and under the country’s dynamic zero-COVID policy, mandatory and sudden lockdown and control measures may cause local manufacturers to face multiple and complex supply chain problems, which will be detrimental to market performance,” Wu noted.

Within Korean business circles, electronics firms are not the only ones suffering from the China lockdown. Korean confectionery makers such as Nongshim and Orion and cosmetics firms AmorePacific and Cosmax have already seen their Chinese operations suspended in the wake of the lockdown.