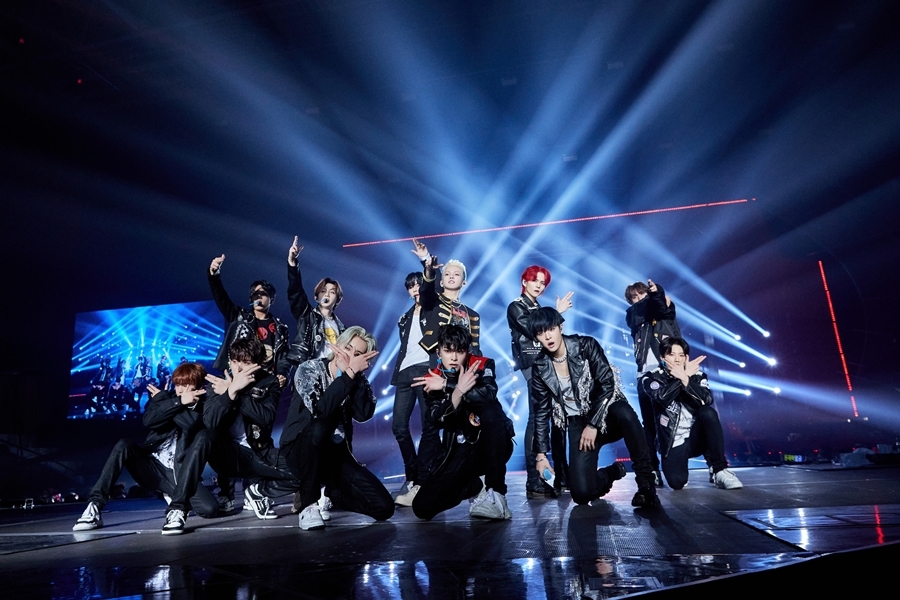 K-pop boy band Treasure performs at the group’s first concert, “Trace,” on April 10, at Olympic Hall in Olympic Park, Seoul. (YG Entertainment)
Making a star-studded debut in August 2020 as the rookie boy band of K-pop powerhouse YG Entertainment and the winners of K-pop competition “YG Jewel Box,” Treasure has been fast-expanding the envelope ever since.

But it was during the two nights of the act’s first stand-alone concerts, “Trace,” over the weekend that the 12 bandmates realized for themselves how far they have come in the past two years.

“Tonight, it really hit me that we are singers. The reason we exist is because of these people (the audience), and this reality just hit me. As I was performing, I looked around at the members and thought that it’s a miracle that we could be here all together like this. I’m so thankful to our fans and will never forget tonight,” the band’s Bang Ye-dam said to the audience during their second night of concerts Sunday.

The two-day series, held at Olympic Hall at Olympic Park in southern Seoul, sold out both nights, with fans from 102 regions around the world joining in through livestreaming platform Weverse, according to YG.

Both nights ran for some 140 minutes, with the band performing 22 songs each night.

Kicking off the show on Sunday was “Jikjin,” the lead track fresh off the act’s latest EP “The Second Step: Chapter One.” Beloved hits “Boy,” “Going Crazy” and “Come to Me” continued to heat up the entertainment, the last of which the band was performing live for the first time on the stage.

In a long-awaited first concert, delayed due to the prolonged novel coronavirus pandemic, the act really dedicated themselves to making a special and unforgettable night for fans.

The most-awaited moment by fans, known as Treasuremakers, was the first-ever performance of “Darari,” a track from the band’s recent album that had received huge amounts of love from fans in and out of the country, despite not being a main track. Thanks to the unexpected popularity of the song, the band is set to continue promotions of the album with “Darari” following the concert. 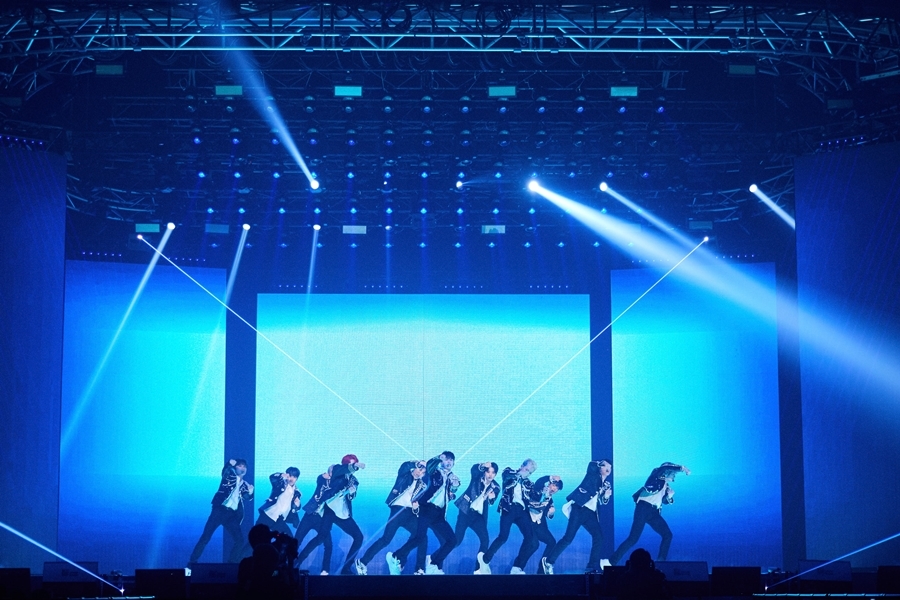 In between the performances, fans also played their part with surprise events for the band. Unable to make much noise due to social distancing regulations, the audience shook placards with touching messages and presented a custom-made “Trace” cake, decorated with macarons in the shape of each of the members’ “Truz” characters.

With his eyes glistening, Asahi said in Korean, “It’s so heartwarming. Although we’re all born in different places, it feels like we’re one now. The fans make me feel so warm.”

Junkyu hinted the fans will not have to wait long for them following the concert. “We may be coming back much sooner than you’d expect!” he shouted.

The enthusiasm continued to heighten with three encore performances. Kicking off the section with “My Treasure,” the band rolled out a remix version of “Going Crazy” before giving their closing messages for the night.

“Thank you for making the day perfect. We will have many more opportunities like this from now on, so please look forward to them,” Yoshi said, adding a few words in Japanese for his family watching the concert through the Weverse livestream.

Doyoung went on to say, “As we had debuted amidst the pandemic, we’ve never really had the chance to meet our fans. There are many people who have worked hard to make this concert happen, and the members put in our grateful hearts into preparing for it. We hope you guys enjoyed it!” 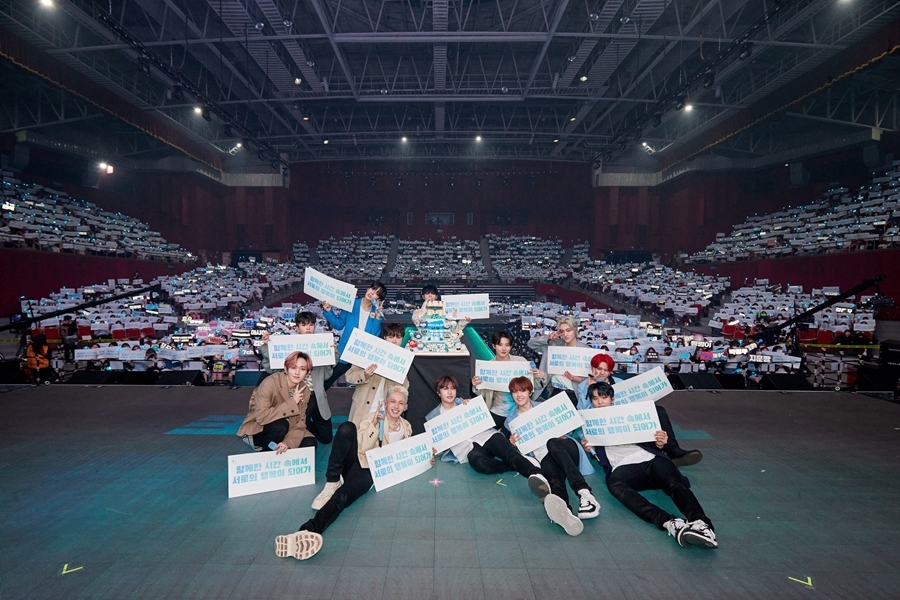 “I know how hard the members had worked for this, and watching their backs from here as they speak just made me feel a little strange. They prepared so hard, even sleeping less to train,” he said, wiping the tears off his face.

“We know that Treasure exists because of Treasuremakers, and we promise to do our best to make you feel happy as much as we do,” Park Jeong-woo said.

The night closed with a soulful instrumental version of “BFF (Best Friend Forever),” signaling a long night for the fans and the bandmates who would not be able to forget the magical time they spent together.

Meanwhile, Treasure has announced its first arena tour in Japan this year. Kicking off on Nov. 26, the group plans to hold 17 concerts in six prefectures: Hokkaido, Fukui, Aichi, Fukuoka, Hyogo and Saitama. Running through Jan. 4, 2023, the tour is anticipated to perform in front of some 155,000 concertgoers in total, the biggest figure racked up by a K-pop act with its first concert tour in Japan.