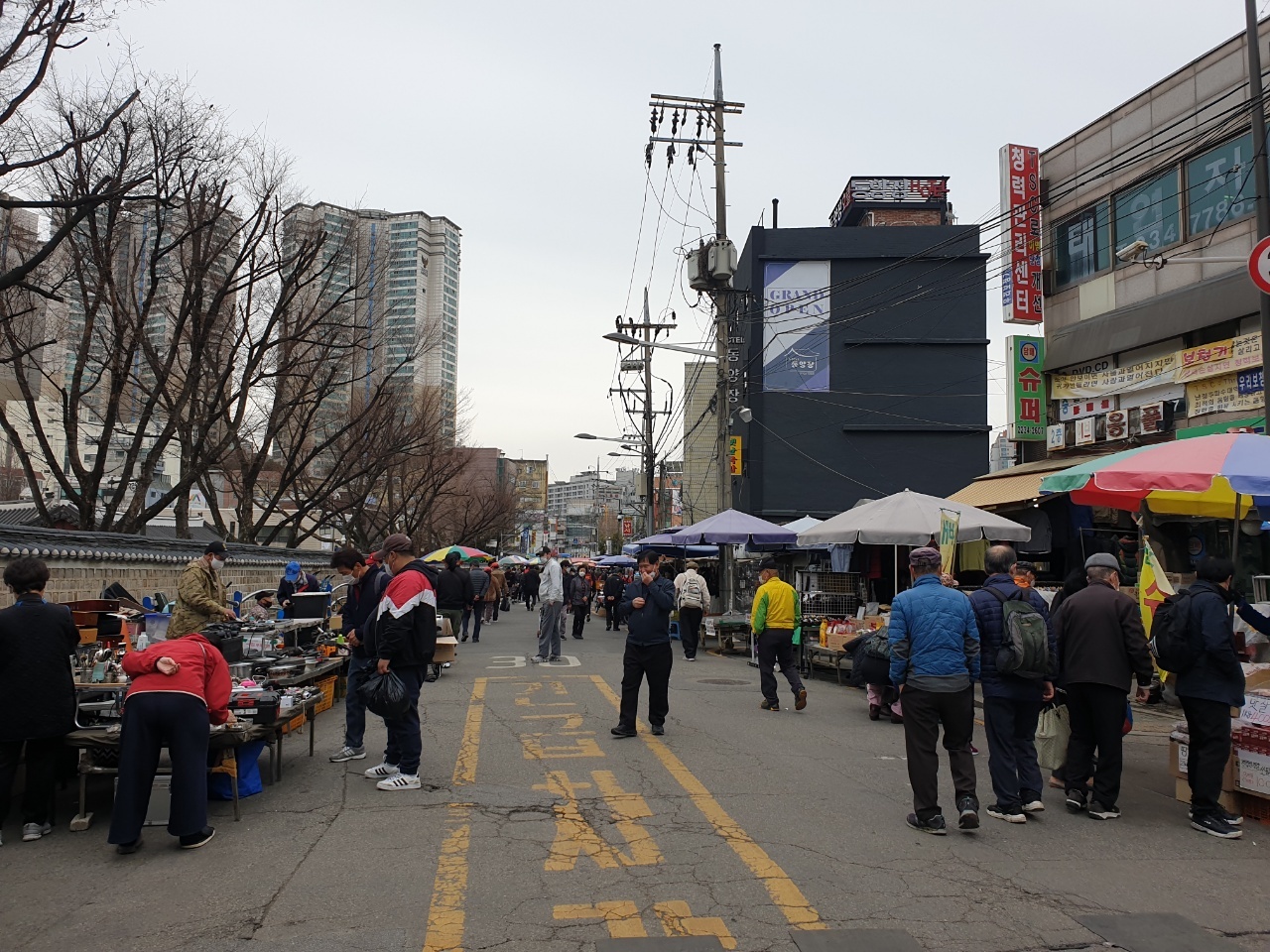 The antique alley of the Dongmyo Market near Exit No. 3 of Dongmyo Station (Choi Jae-hee / The Korea Herald)
Dongmyo Station on Subway Lines No. 1 and 6 takes its name from a shrine for a Chinese god of war -- Guan Yu. 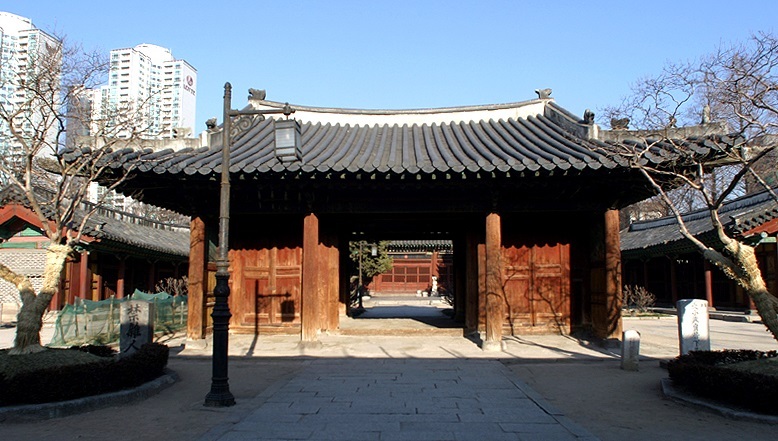 A 2015 picture of the front entrance of Dongmyo Shrine (Cultural Heritage Administration)
Most visitors, however, are indifferent to the pavilions that stand behind the shrine’s stoned wall, and do not seem to question why the Han Dynasty warrior, later deified as a god in China, is enshrined there.

What catches their eyes are the area’s thrift shops and stalls crammed with vintage clothes, antiques and secondhand items. 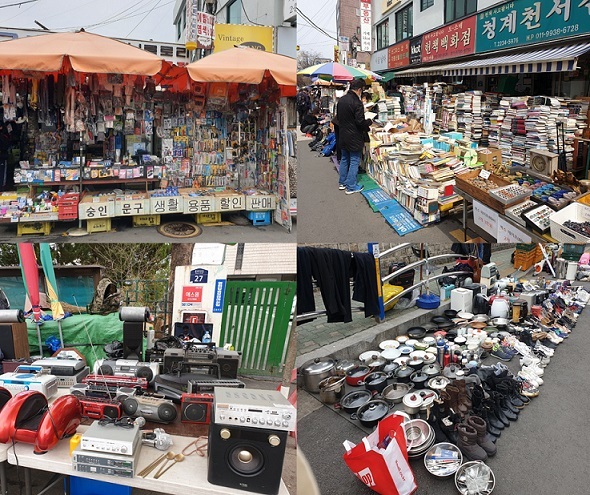 Used home appliances, household items and books are on sale. (Choi Jae-hee / The Korea Herald)
One of the biggest flea markets in Seoul, Dongmyo Market starts just outside the shrine at the station’s Exit No. 3. 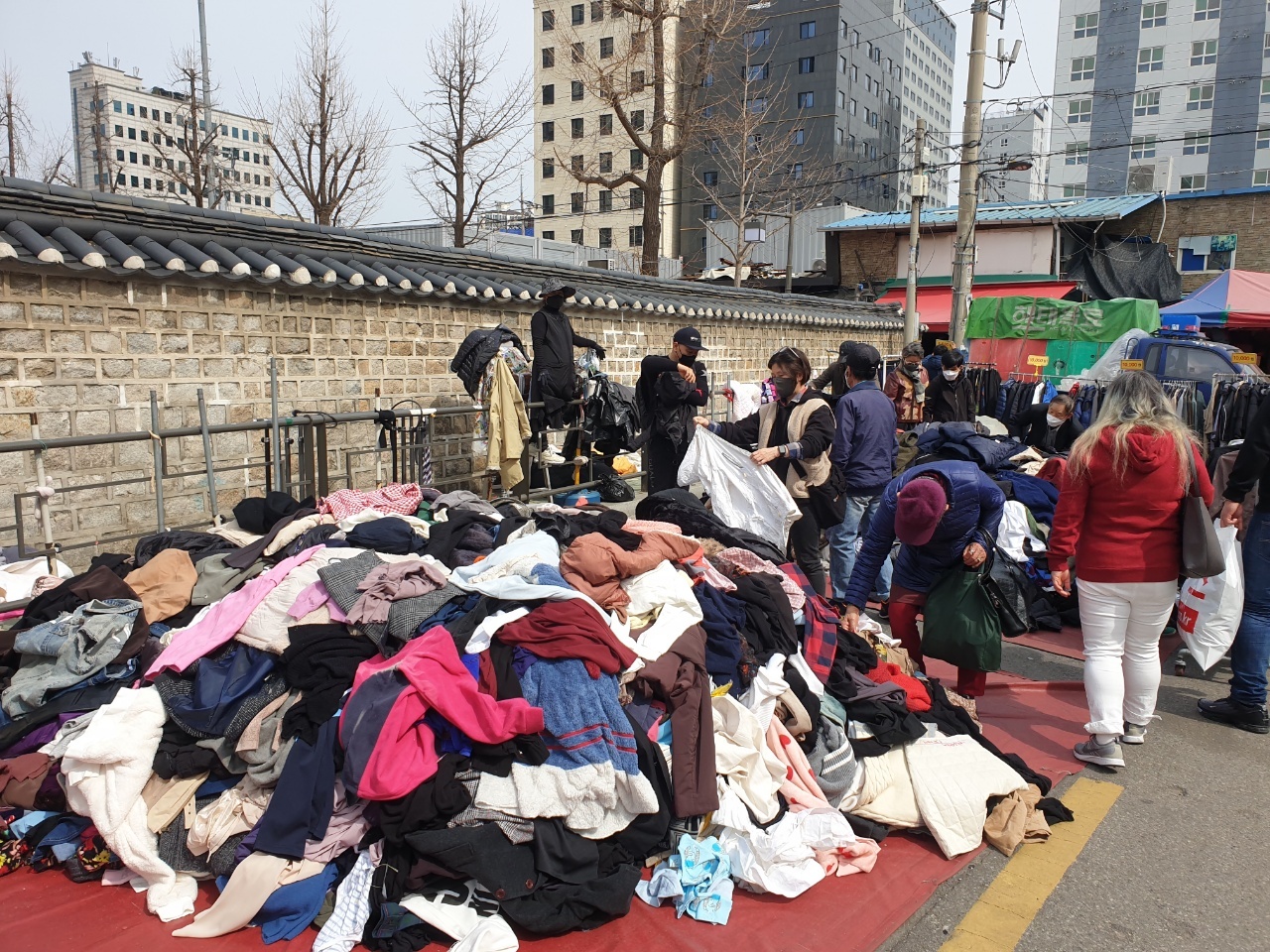 On a recent Thursday afternoon, thrift hunters were rummaging through piles of secondhand clothes and fashion accessories on an alley dedicated to vintage wares. The other of the market’s two main alleys features mostly antiques.

“Clothes vendors usually come out around noon. We accept cash only,” said a female seller who wished to remain anonymous. She was standing by a number of suitcases and large-sized plastic bags filled with items to sell.

Piles of clothes, shoes and hats heaped on the mat form what locals call a “graveyard of clothes.” Some have small tears or loose buttons. The price goes anywhere between 1,000 won to 5,000 won apiece.

Among the stacks was Hong, who introduced herself as a 27-year-old graduate student living in Chungmuro, who said she found a good deal.

“I bought a cotton blazer and a vintage leather jacket for 3,000 won each, which have brand labels. The jacket is a little big on me, but I like the way it is. I love oversized and baggy clothes,” said Hong, who only gave her surname.

Just a short walk from the clothing cemetery, there stands a row of boutiques offering name-brand clothes. 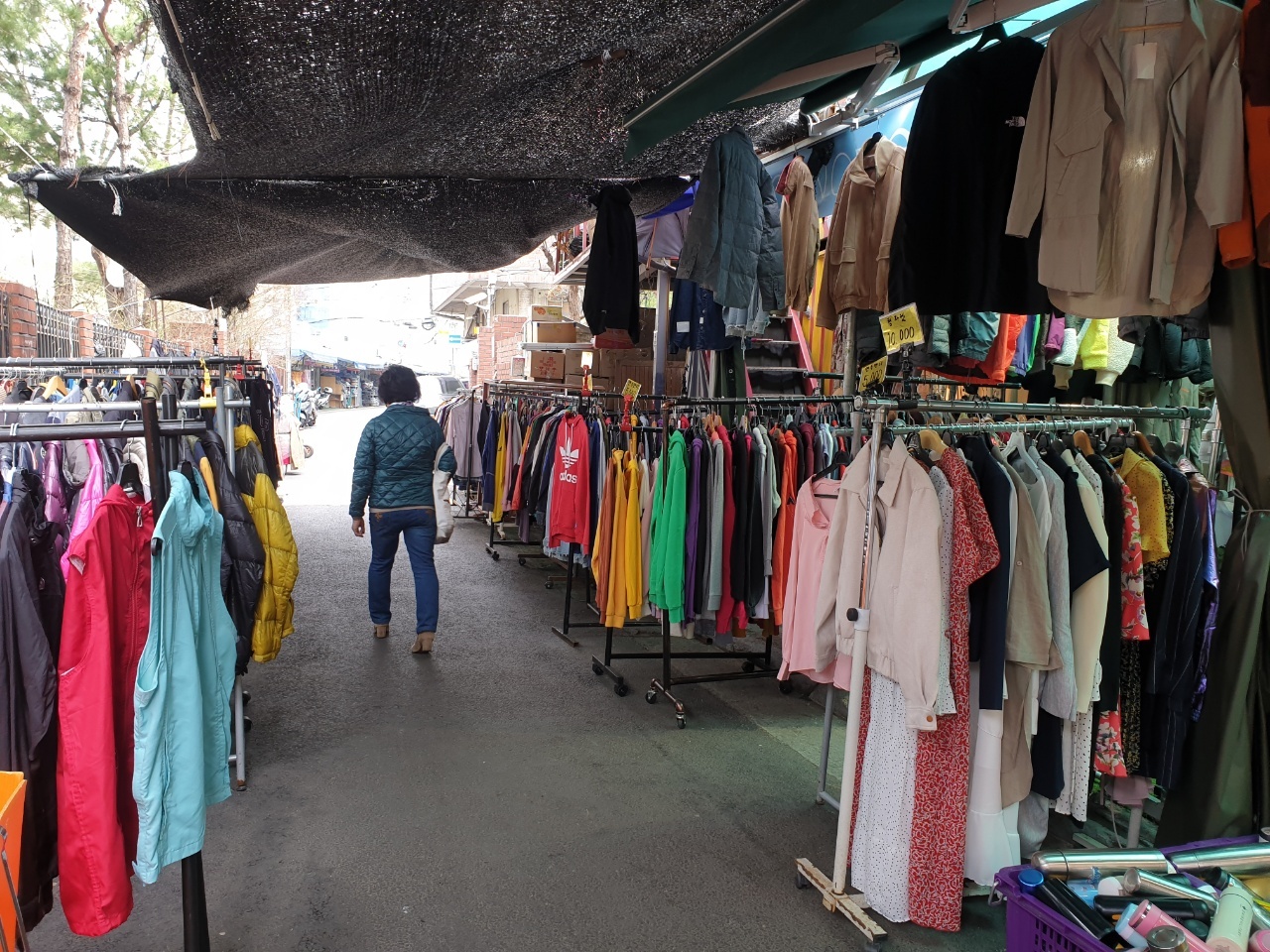 An alley lined with vintage stores offers secondhand luxury goods. (Choi Jae-hee / The Korea Herald)
One store had collections of high-end brands on display, including Chanel, Gucci and Burberry. There, a classic Burberry trench coat, which would sell at more than 1 million won if new, was priced at 80,000 won. 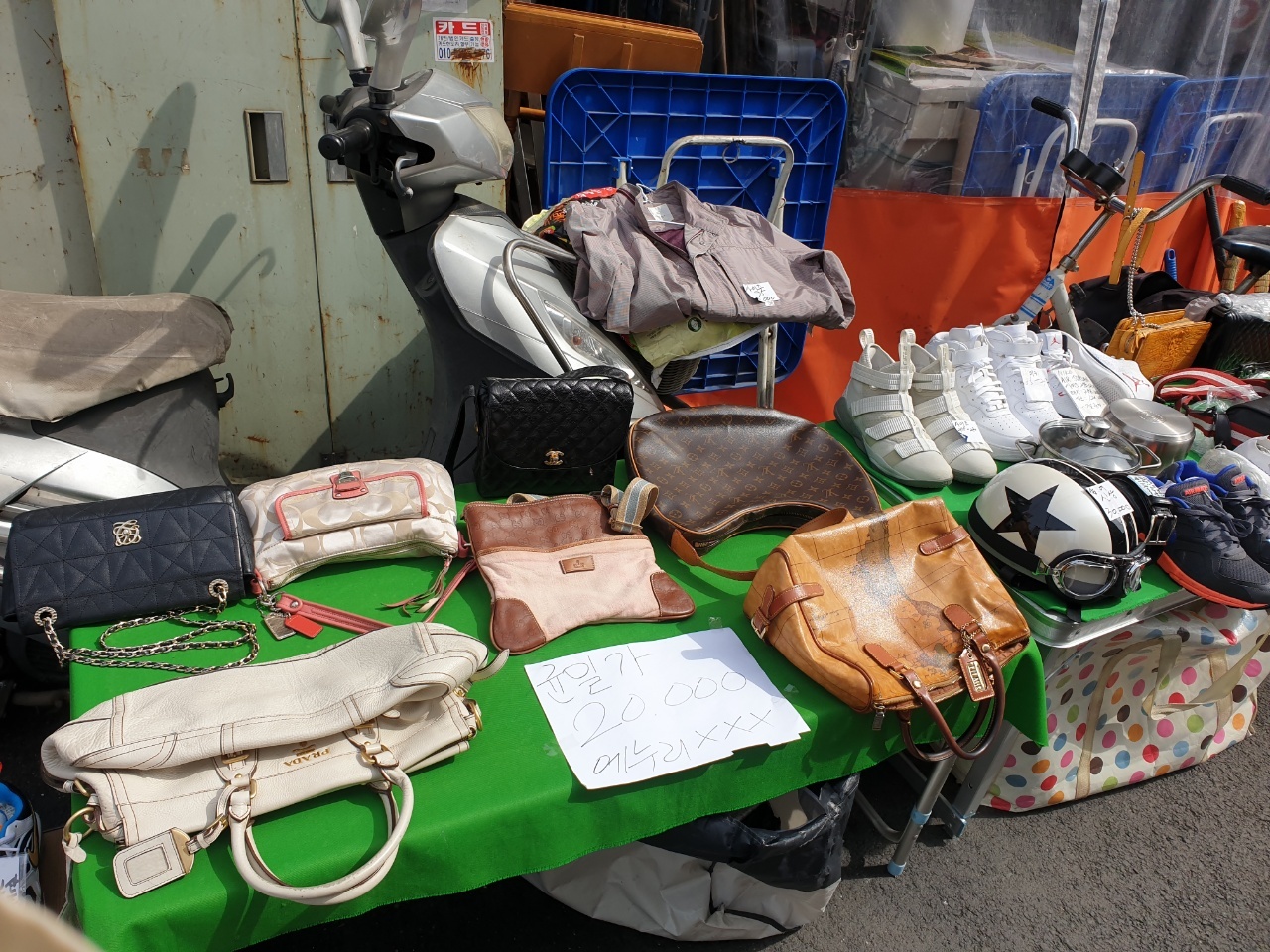 Chanel handbags and other luxury items are priced 20,000 won each at a vintage shop on the street. (Choi Jae-hee / The Korea Herald)
Both street stalls and vintage shops here usually get the clothes from resellers overseas or domestic companies that operate clothes donation bins, according to the store’s owner surnamed Park who is in his 50s.

It is not just thrifters who throng the alleys of Dongmyo Market. Nowadays, the area draws young hipsters and snap-happy Instagram users.

One of the merchants specializing in techwear said the new generation of shoppers are looking for sought-after brand items.

“I think luxury items are much sought after by young people. Social media posts and videos featuring hot spots on the streets have further driven up the market’s popularity among youngsters,” the 38-year-old said, only wanting to be identified by the name Jin. 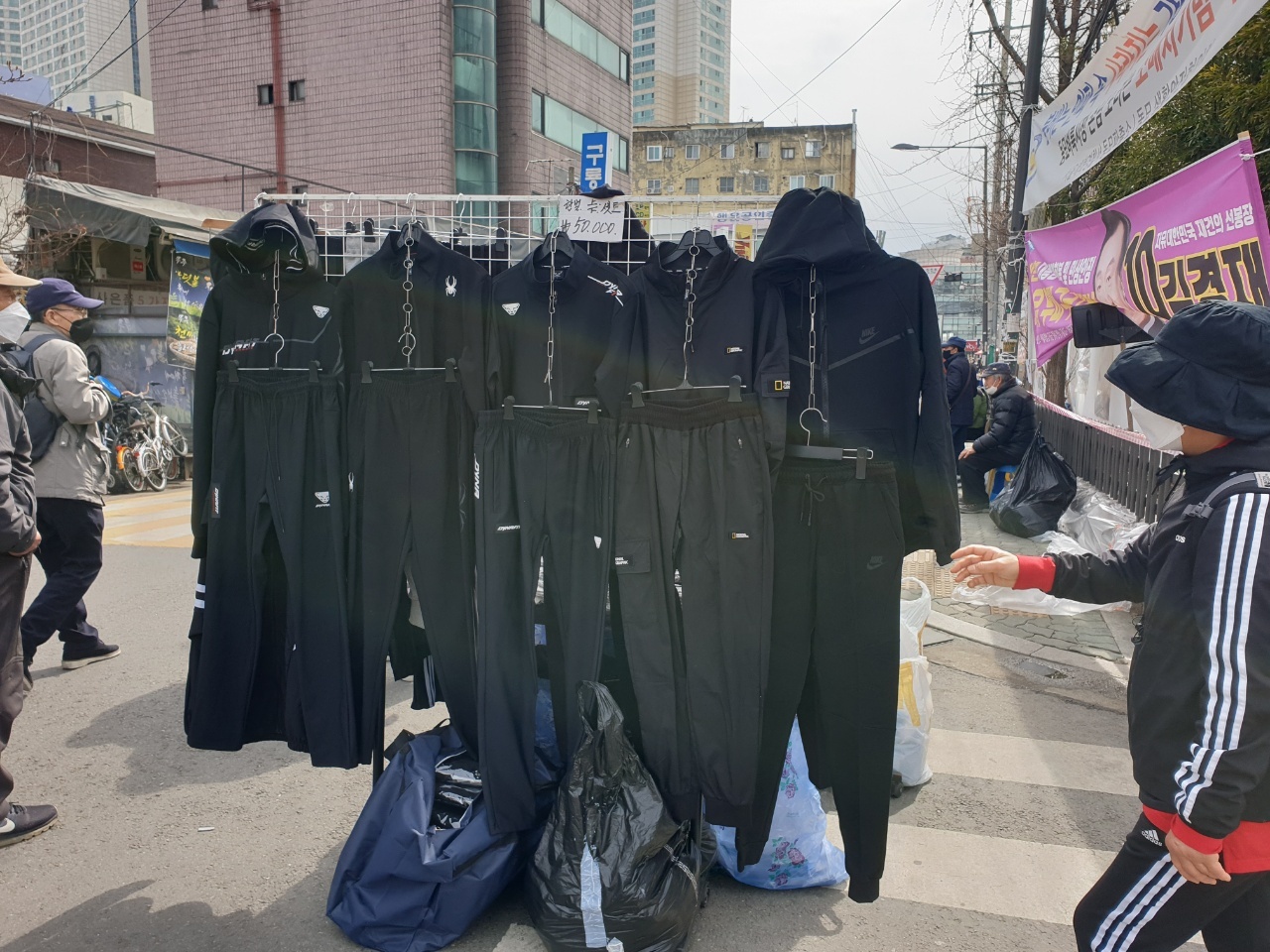 Hoodies and sweaters of the “techwear” style, popular among the younger generations, are on display. (Choi Jae-hee / The Korea Herald)
His stall is also popular among young people, as techwear is one of the hottest men’s fashion trends at the moment, combining functionality with style.

Lovers of retro trends also like to poke through the antique alley which is lined with small shops full of old books, video tapes, film cameras, LP records and knickknacks.

The area holds an appeal even for those who are not serious about thrifting, with its old streets, food stalls and the lively atmosphere of a flea market. 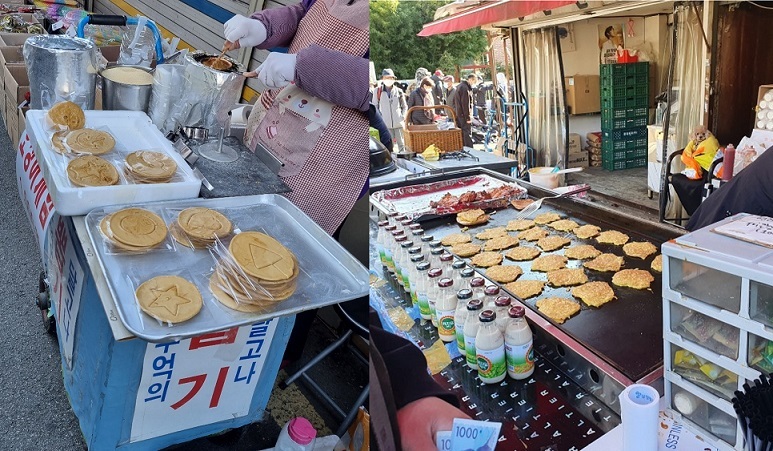 Little is known about how a flea market came to thrive in front of a shrine.

Locals say there were a small group of street stalls selling secondhand goods from the ‘80s. At that time, the city’s thrift goods mecca was Hwanghak-dong, just 10 minutes from Dongmyo on foot.

In early 2000s, a major project in the center of Seoul altered fates of the two. As the city worked to restore the then-buried Cheonggyecheon, Hwanghak-dong’s market shrank and its sellers moved to nearby Dongmyo.

It is easier to trace the history behind the shrine for Guan Yu, a familiar name among Koreans as one of the heroes starring in the Chinese classic “Romance of Three Kingdoms.” 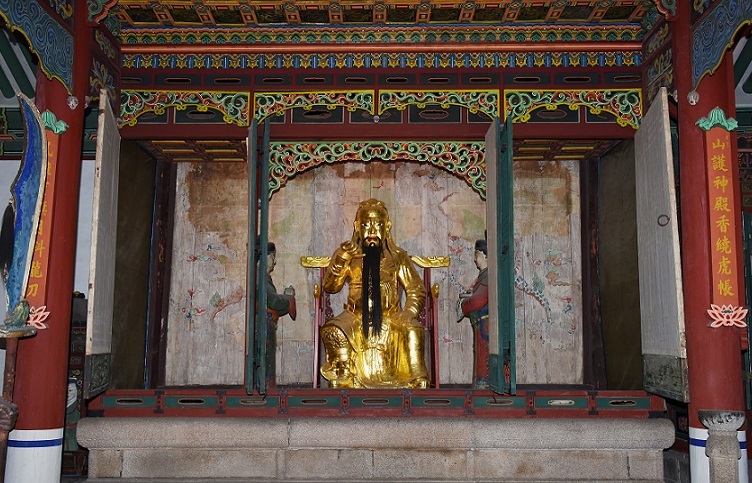 A 2015 picture of a golden statue of Guan Yu (Cultural Heritage Administration)
The story begins with Japan’s invasion of the Korean Peninsula in the late 16th century. Emperor Wanli of China’s Ming Dynasty dispatched troops to help Joseon fend off Japan. After the war was won, he requested Joseon to build a shrine for Guan (160-220), who was a general serving under the warlord Liu Bei at the end of the Han Dynasty, to signify the spiritual support for the ancient Chinese warrior. Construction began in 1599 and ended in 1601.

It is registered as Korea’s Treasure No. 142.