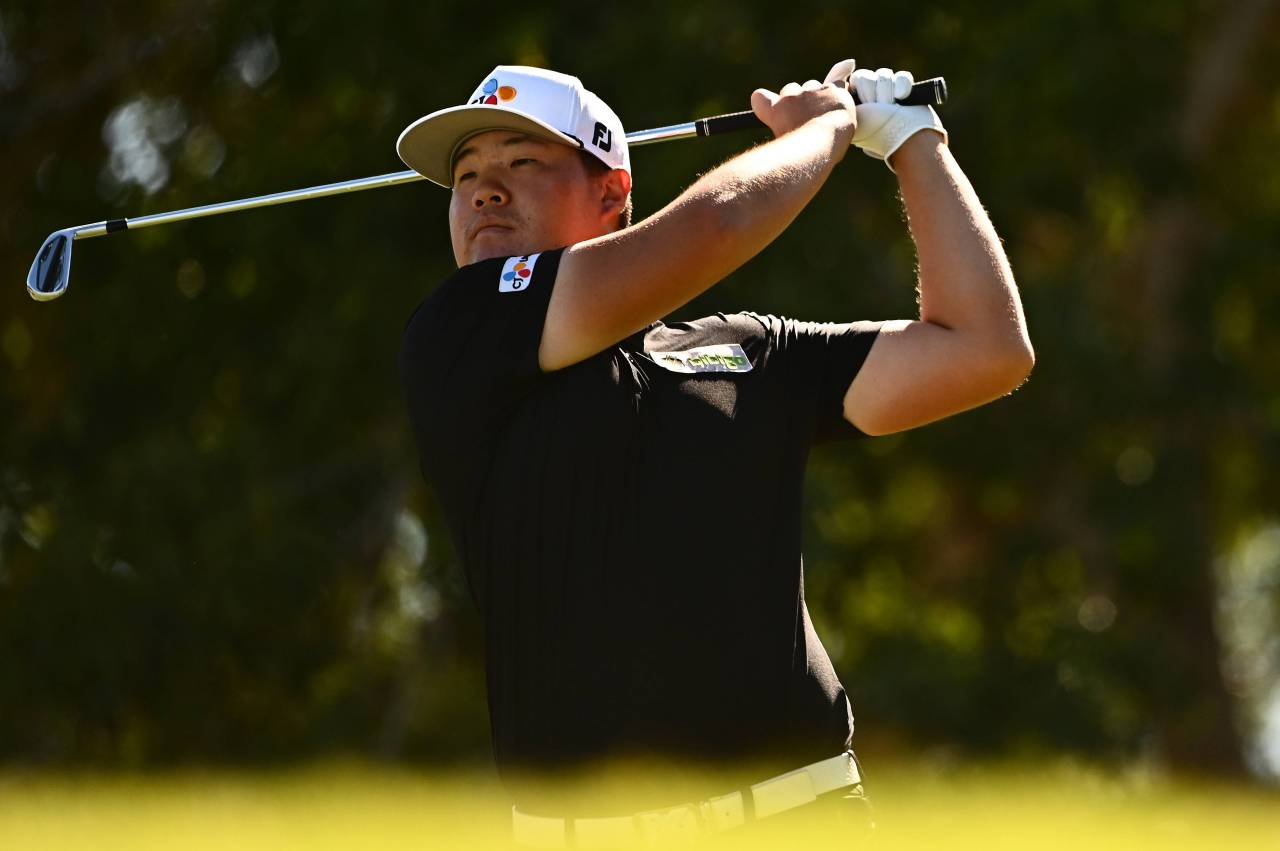 In this Getty Images photo, Im Sung-jae of South Korea watches his tee shot from the eighth hole during the final round of the Shriners Children's Open at TPC Summerlin in Las Vegas on Oct. 10, 2021. (Getty Images)

Im Sung-jae tied for eighth place at the Masters on Sunday, earning his second-career top-10 finish at the season's first major championship following an up-and-down final round.

Im shot a three-over 75 on Sunday to end up at one-over 287 overall at Augusta National Golf Club in Augusta, Georgia, on Sunday (local time). Im ended up nine shots behind the winner, Scottie Scheffler of the United States, after recording six bogeys and three birdies.

This was Im's worst score over four days at the famed golf course. The South Korean opened with a 67 but followed that up with three straight rounds in the 70s -- 74-71-75.

Im was the runner-up at the 2020 Masters, the best showing by an Asian golfer at the tournament before Hideki Matsuyama of Japan won it all in 2021.

"A top-10 finish at a tournament as big as the Masters sounds good, but I had a disappointing finish," Im said. "I wasn't satisfied with the way I played."

Im began this year's final round in third place, trailing Scheffler by five strokes at four-under. And Im fell further out of contention with a bogey at the par-three fourth. He pulled his tee shot to the left of the green on the 240-yard hole, and his par attempt from eight feet lipped out.

Im had his first birdie at the seventh hole but then took three bogeys over a four-hole stretch, starting at the ninth hole.

Im three-putted from 36 feet on the ninth green for the first of those bogeys. At the 520-yard, par-four 11th, Im reached the green safely in two, only to have another three-putt bogey.

At the par-three 12th, Im's tee shot missed the green and the long chip shot set up an 11-footer that Im missed to the left for another bogey.

Im bounced back with birdies at the 13th and 14th. But then he bogeyed the 15th hole, the final par-five on the course. From the center of the fairway, Im sent his third shot way past the green. His chip rolled off the front of the green, and he needed two more shots from there to finish the hole.

Im finished his tournament with a bogey at the 18th. He hit a mediocre second shot from just left of the fairway and went on to miss a 13-foot par attempt to the right.

"You have to be accurate with your shots here. You don't want to overswing and risk dropping shots," Im said. "It's important to put your shots in right spots on the greens. They are big and have a lot of undulations."

The usually stoic 24-year-old looked visibly frustrated throughout Sunday as he struggled with his ball striking.

"I have now proven that I can play well here in November and also in April," Im said. "That's two top-10 finishes in three starts. I think I can give myself a chance to win if I am playing well."

Im has also secured a place in next year's Masters by finishing among the top 12. He said he hopes to be back in contention in 2023.

"I've never played in front of this many patrons (at the Masters), and I was a nervous wreck," Im said. "I will learn from this experience and hopefully, I can play better at majors from now on." (Yonhap)