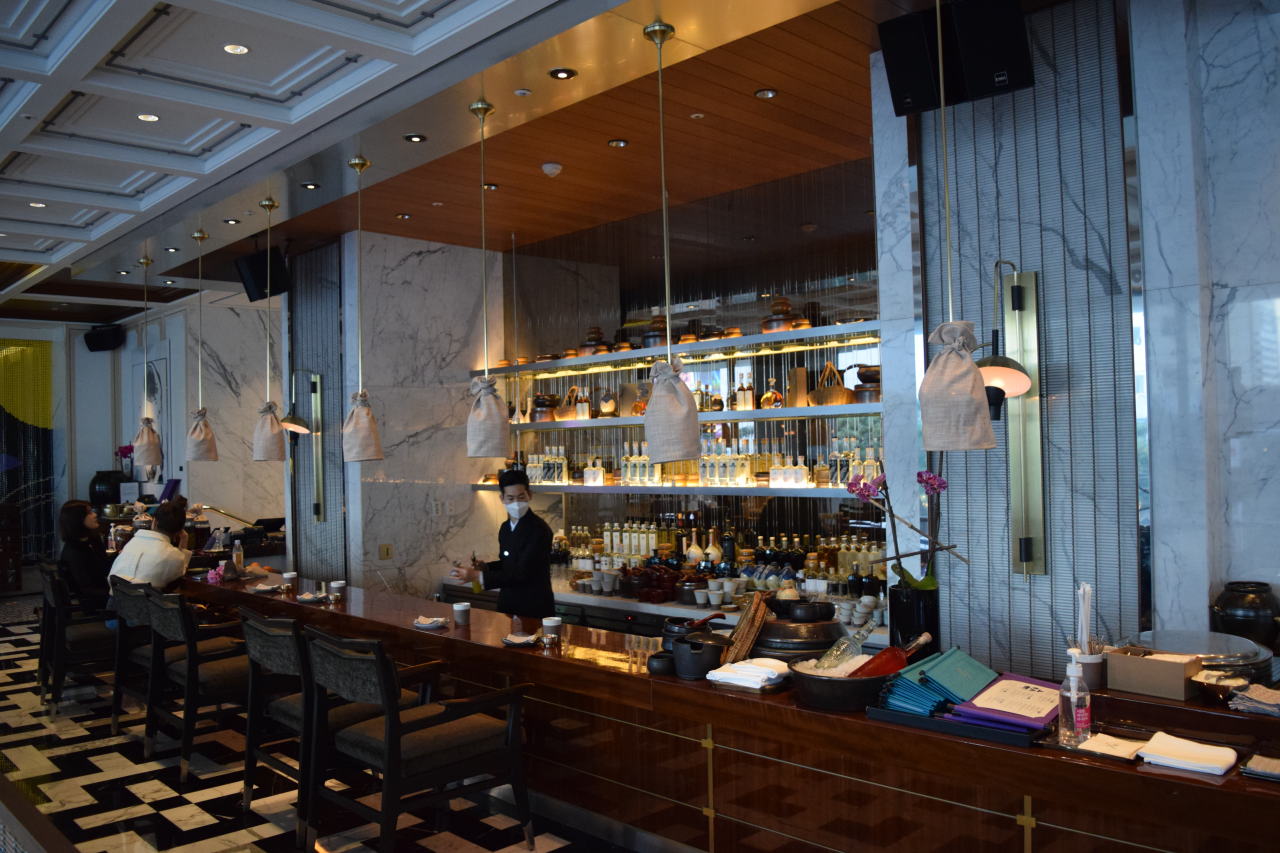 Themed “Journey through Seoul’s evolution in drinks,” the name Oul takes the last three letters from “Seoul.” It also captures the spirit of the capital as a destination for night owls with a vibrant nightlife scene centered around drinking.

While most hotel cocktail bars are designed with a Western concept, Oul aims to meet the needs of those thirsty souls who are keen to discover Seoul, without venturing out into the bustling city center at night.

Oul’s three-part beverage menu consists of the past, present and future of the city’s liquor crafting. All drinks and dishes are created and selected by the bar’s chefs, bartenders and staff, and are made using ingredients grown and produced in the country. 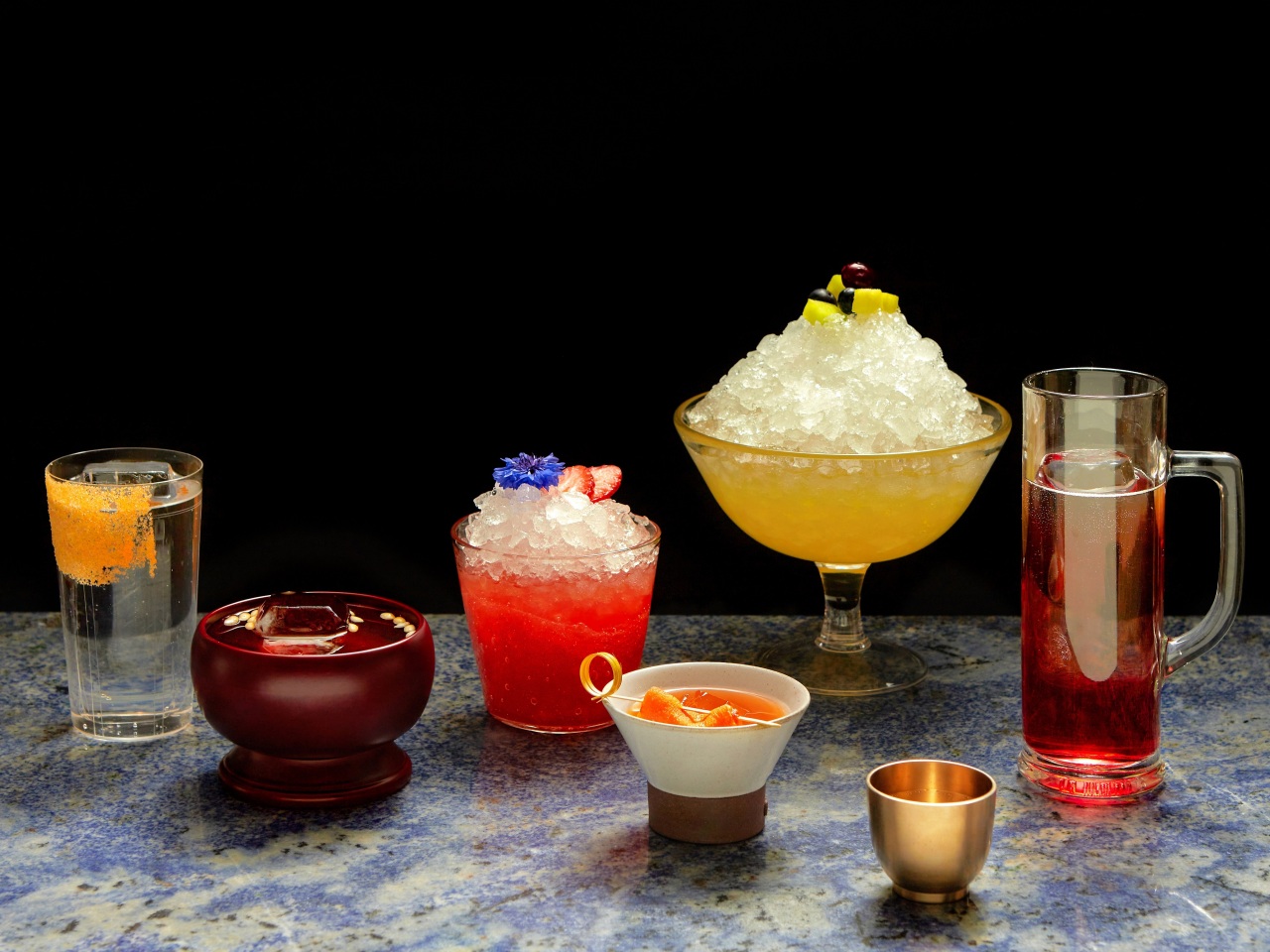 A set of Oul’s cocktails (Four Seasons Hotel Seoul)
The first part, “Traditional,” is inspired by Hanyang, the name of the capital during the Joseon era. It was seen as the golden age of home brewing, as households made their own makgeolli, or rice wine, and gwasilju, a fermented fruit liquor.

Oul’s sikhye -- originally a Korean dessert drink made of fermented malt and rice -- consists of craft soju, pumpkin cordial, clarified milk and chai tea. Another cocktail creation is the Wooyoo, a mix of omija makgeolli, milk and dalgona ice cream.

The “Turn of the century” menu is based on the arrival of the modern era and foreign influences in Gyeongseong, as the capital was called during the Japanese colonial era. The Seoul Mule is a buttered vodka-based signature cocktail, with ginger, ginseng, garlic tincture and craft ginger seltzer. It has a bitter note that comes from the pungent scents of ginger and garlic, but ends with a sweet finish. The chewable caramelized ginseng root on top of a traditionally designed cup is a delightful snack. 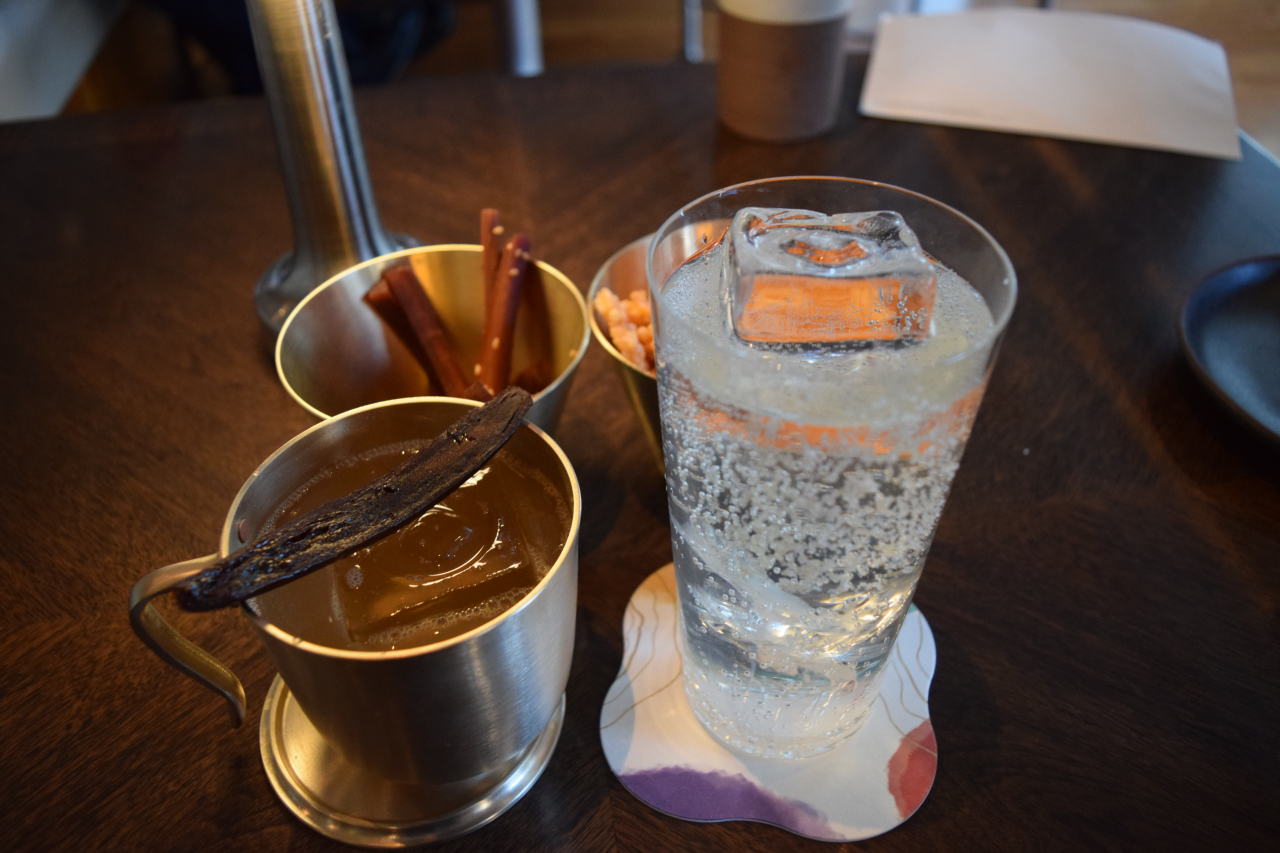 Seoul Mule (left) and Kimchi Highball with complimentary snacks are offered at Four Seasons Hotel Seoul’s Oul. (Kim Hae-yeon/The Korea Herald)
“Today and beyond” showcases Seoul as a global megalopolis with diverse aspects of culture and the arts. The signature drink in this section of the menu is the Kimchi Highball, which mixes craft soju with green chili, kimchi salt and kimchi juice. At first sip, kimchi lovers would say there isn’t much of a kimchi taste, but the sour and spicy kick from the fermentation process makes it a unique cocktail worth trying.

Anju, a category of food typically eaten with drinks in Korea, at Oul pays homage to the country’s hearty gastronomic inventions.

There is a great variety to choose from, from quick snacks and noodles to cold and hot dishes meant to be shared.

The lobster tteokbokki is a street food-inspired dish that includes lobster sausage. Lobster sausage substitutes for the eomuk, or fish cakes, that typically go into tteokbokki, and pairs well with the tteok, or rice cakes, as both have a chewy texture. The broth feels lighter compared to that found from street vendors. 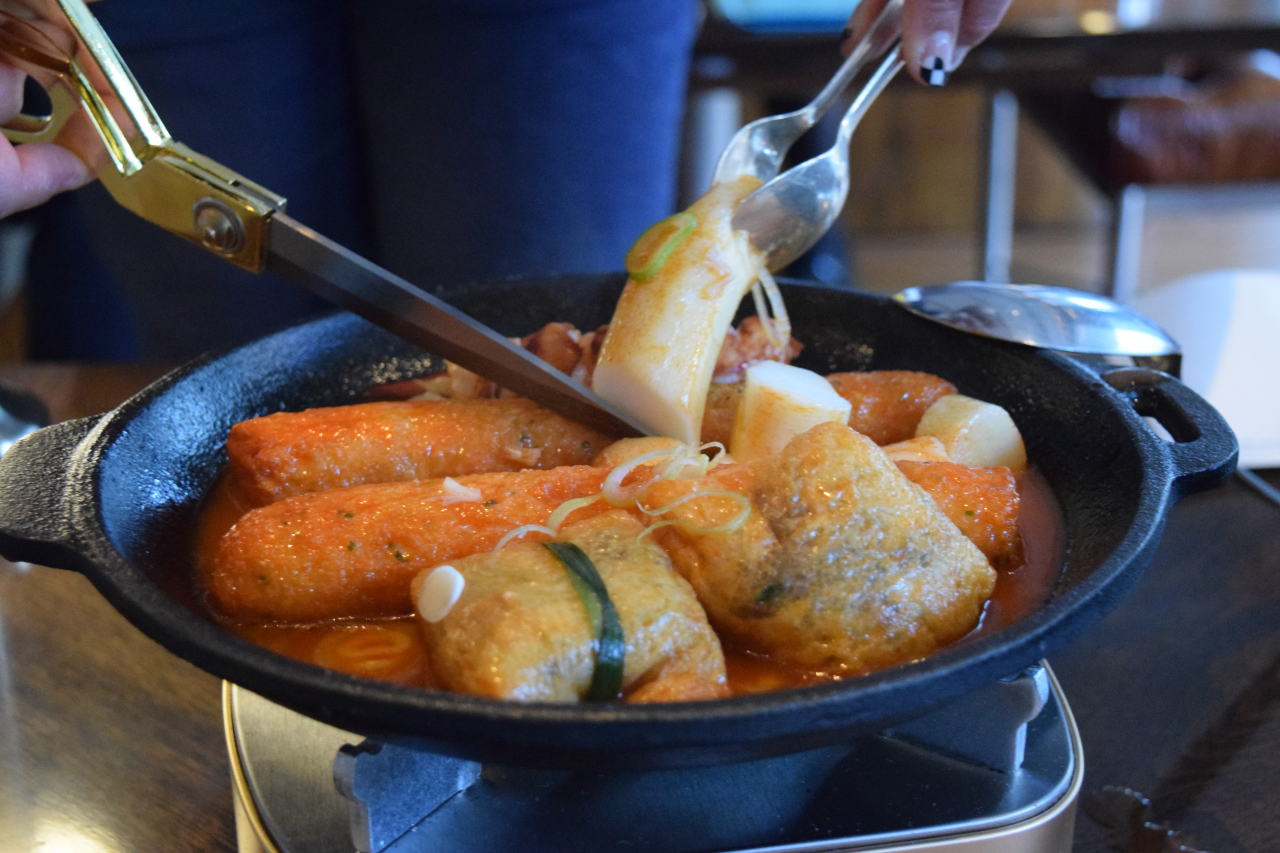 Lobster tteokbokki, a plated inspired by street food, at Oul (Kim Hae-yeon/The Korea Herald)
“When first coming up with the idea of opening this bar, we did not specifically target the MZ generation,” Lee told The Korea Herald at Oul on a Friday evening, using the collective term for millennials and Generation Z. “But as you can see, the majority (of our guests) are in their late 20s to 30s.”

“I hope the younger guests can also have their presence at our hotel, freely chat with our bartenders and shape and create spaces and foods that they want to enjoy,” Lee said.

Lee added that prices at Oul are relatively lower than other hotel bars, another factor that attracts youngsters.

With hanbok-inspired staff uniforms and a mix of upbeat modern music ranging from deep house to funky disco, Oul exudes a vibrant energy just like the colorful cocktails and their compelling stories.