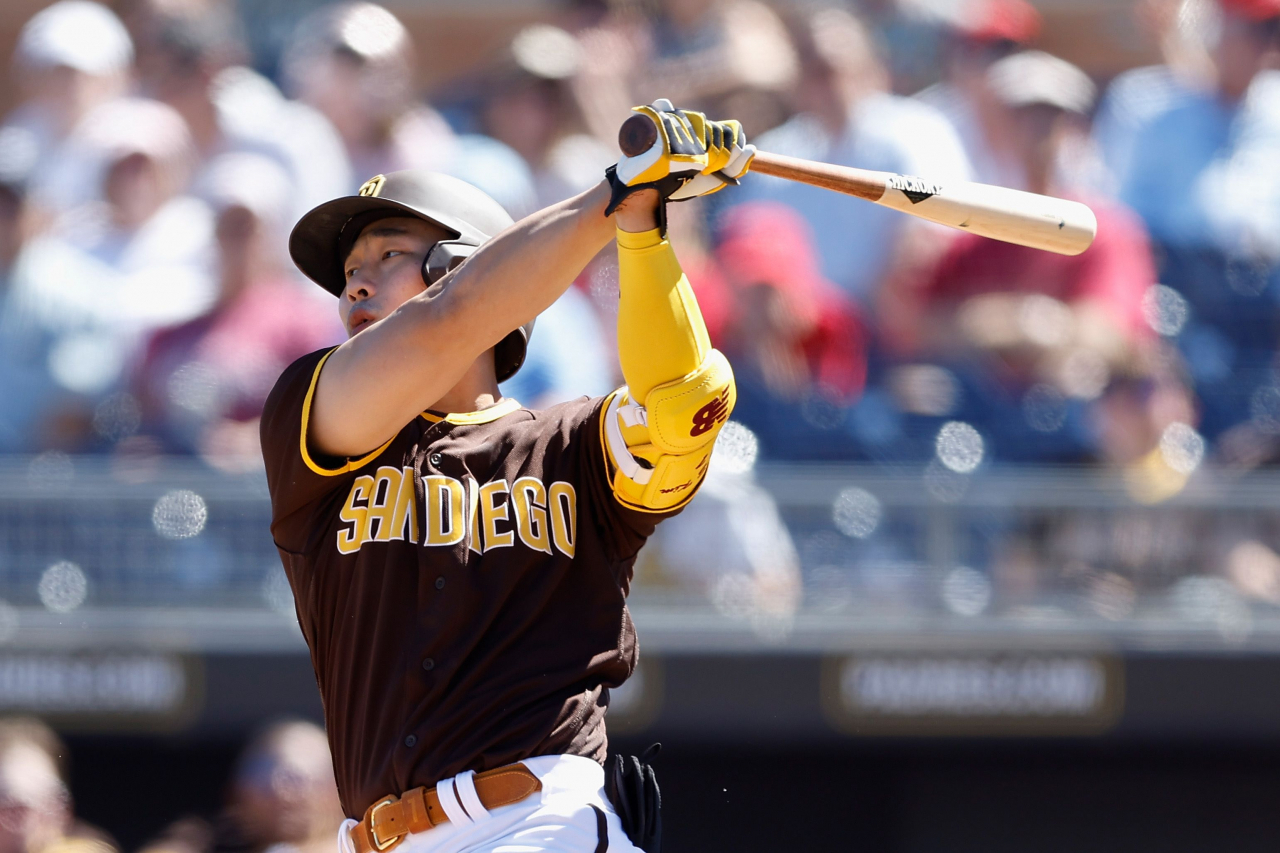 In this Getty Images file photo from March 23, 2022, Kim Ha-seong of the San Diego Padres takes a swing against the Los Angeles Angels during the bottom of the second inning of a Major League Baseball spring training game at Peoria Stadium in Peoria, Arizona. (Getty Images)

San Diego Padres' South Korean infielder Kim Ha-seong has gone deep for the first time in spring training, while his countryman for the Pittsburgh Pirates, Park Hoy-jun, has extended his hitting streak to six games.

The one other South Korean hitter in the bigs, Choi Ji-man of the Tampa Bay Rays, continues to be cold at the plate.

Kim smacked a three-run home run off D.J. McCarty of the Texas Rangers in the top of the third inning of the teams' spring training game at Surprise Stadium in Surprise, Arizona, on Monday (local time).

Kim had earlier tripled off Texas starter Dane Dunning in the second inning. Batting eighth and playing second base, Kim went 2-for-4 with four RBIs but also struck out twice.

Kelvin Melean replaced Kim at second base to begin the bottom of the eighth.

Kim, a former Korea Baseball Organization (KBO) All-Star, is in his second season with the Padres. Primarily a shortstop in Korea, Kim split his first big league campaign at shortstop, third base and second base.

With the regular shortstop Fernando Tatis Jr. out about three months with a wrist injury, Kim is expected to get the bulk of playing time at shortstop, though top prospect CJ Abrams has also made noise during camp.

For the Pirates, Park went 1-for-3 with a walk and a run against the Baltimore Orioles at Ed Smith Stadium in Sarasota, Florida.

Park, who got the start at second base and batted seventh, has now hit safely in six consecutive games, and in seven of his eight games so far in camp.

With a .304/.360/.609 line and a couple of home runs, the 25-year-old is trying to crack the Pirates' Opening Day roster after joining the team last summer in a trade from the New York Yankees.

Park has handled even more positions than Kim, with games at second base, third base and all three outfield positions in 2021.

Of the South Korean position player trio, Choi may have the most job security, as the 30-year-old enters his fourth full season with the Rays as their first baseman.

But he is also having the worst spring training of the bunch. On Monday, he went 0-for-2 with a walk against the Atlanta Braves at Charlotte Sports Park in Port Charlotte, Florida.

Choi has gone 1-for-15 with five strikeouts, though his eight walks have given him a solid .375 on-base percentage. (Yonhap)