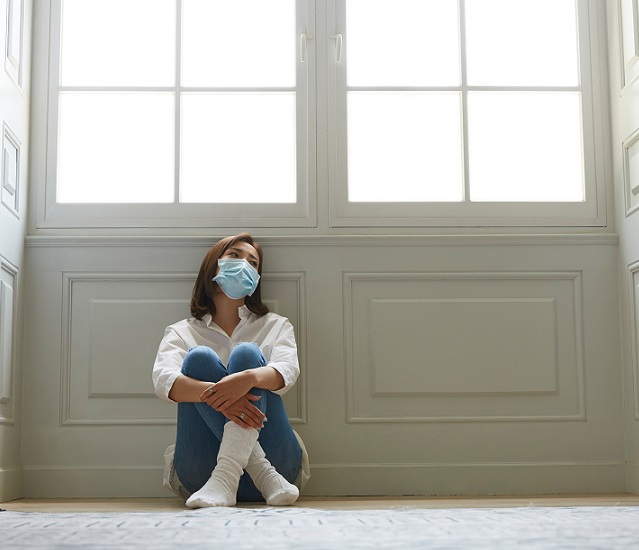 Past the omicron peak, South Korea now has over 14 million accumulated coronavirus cases, which means in this country of 52 million, more than 1 in every 4 have gotten COVID-19 at least once.

A vast number of them must have had that experience in the past several weeks, as the country’s virus curve hit over 620,000 daily cases on March 17.

But as they say, every cloud has a silver lining. People who have recently recovered shared with The Korea Herald some of the positive things they learned from their personal encounter with the virus.

Na Eun-jung was one of nearly 340,000 people who were newly counted as a COVID-19 patient on March 24. Following the diagnosis, she ran a fever -- over 39 degrees Celsius -- for three days in a row. That was when anxiety began to creep in.

“As my body temperature didn’t come down even after taking pills, I was scared that I might have developed pneumonia,” said Na, 33, who lives alone and runs a dessert shop in Bangbae-dong, southern Seoul.

She turned to open chat rooms offered by mobile messenger KakaoTalk for the first time in her life, trying to connect with others who also exhibited similar symptoms. 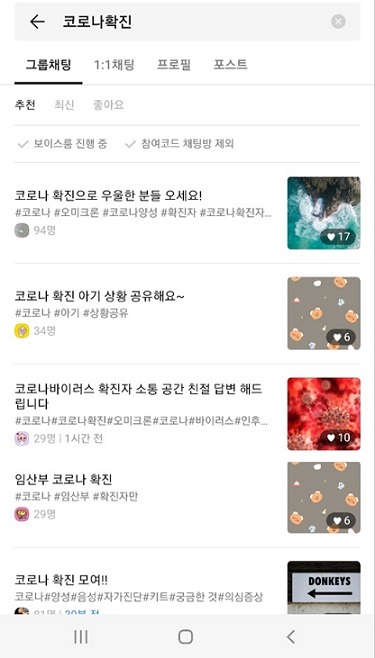 Mobile chats with fellow sufferers have brought her great comfort, Na revealed, especially when she felt she was left alone to fight the deadly disease, without any help from the health authorities. As cases mounted, Korea’s virus control policy has shifted from its previous active intervention and care for all sickened people to a selective focus on the most vulnerable group.

“There was an infected person whose fever broke five days after being confirmed with COVID-19. He said I would be OK if I don’t have severe respiratory difficulties. … I was much relieved after talking to him,” Na said.

Home treatment is the norm for COVID-19 care in Korea now, as hospital beds are reserved for patients with severe symptoms or certain high-risk groups.

Many online communities have turned into a platform for virus-positive individuals to share tips and or seek help.

Cho Min-jung, a mother of two living in Anyang, resorted to a mom’s community forum on Naver, the country’s largest portal site, whenever she felt unsure about how to care for her 11-year-old daughter when she got COVID.

“My daughter has a record of asthma as a young child. When she got infected, I was gripped by worry. A mom’s group on Naver was where I found comfort, as it had numerous posts from fellow moms going through this as well,” she said.

During the days when her family battled COVID -- all four in her family got infected -- the online community group was her best friend, Cho added.

For Jung, a 24-year-old female college student living in Bundang, Gyeonggi Province, her COVID-19 sick days entailed a quite pleasant, first-hand experience with telemedicine -- something she had not been interested in before.

“It was the first time that I ever had a video chat with a doctor,” said Jung, who preferred to be identified by her last name.

She came to learn that telemedicine apps are just as easy and convenient as ride-hailing app Kakao Taxi which matches passengers to the nearest drivers in the surrounding area, she added.

“While I had to wait for almost an hour until a doctor at a nearby hospital called me back for a medical consultation by phone, the telemedicine app (found an available doctor) and connected me with the doctor in just a couple of minutes.”

An office worker in his 30s living in Godeok-dong, Seoul’s Gangdong-gu, caught the virus in late February and had his MacBook, a wireless mouse, blue light blocking glasses and other items he left at his office delivered to his home through a quick delivery service operated by Kakao Taxi.

“I asked my co-worker to hand over my things to Kakao’s delivery man. I received them in less than an hour, which cost some 15,000 won,” said the man who only gave his last name as Song.

Errand apps which link clients with people to help with small chores for a fee became the go-to solution for many under home quarantine. Many used it for the delivery of medications from nearby pharmacies to their doorsteps.

Some have picked up new hobbies to relieve the stress and boredom of being in isolation, ranging from DIY indoor activities to home baking.

Two sisters surnamed Chae, 11 and 9 years old, living in Gwacheon, in the southern outskirts of Seoul, discovered the world of finger knitting on YouTube.

Following tutorial videos on the platform, they knitted simple items like a trivet, a dog leash and key rings, from old socks. 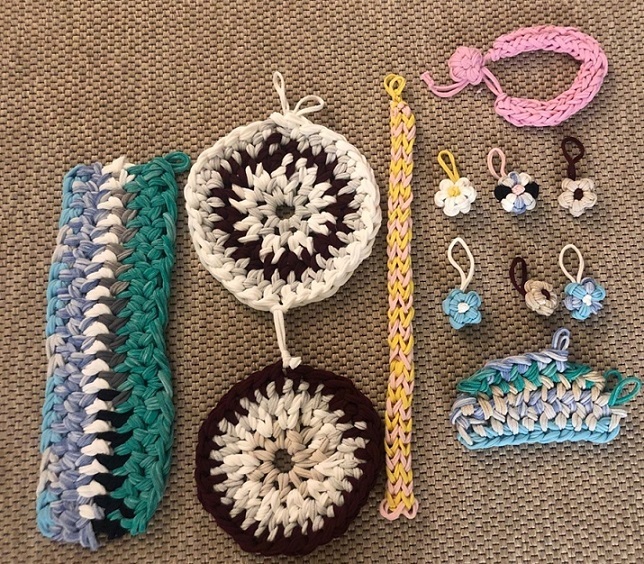 By twisting the strings and coiling them into the shape of a flower, ring or rope, the girls transformed the fibers, which would otherwise be thrown away as trash, into one-of-a kind items.

“At first, we tried a simple one. It turned out to be quite easy. So we began to knit many more things to give as presents to my family and friends,” the older Chae said.

Some patients, who find themselves stressed out and craving something sweet, started baking at home.

Park Hyo-jin, a 17-year-old high school student living in Eunpyeong-gu, northwestern Seoul, made macarons and chocolate brownies with baking kits while under quarantine.

“I bought various meal kits for desserts online. Some of them offer no-bake recipes, which is easier to try. Time went by so quickly while I made sweets,” she said. 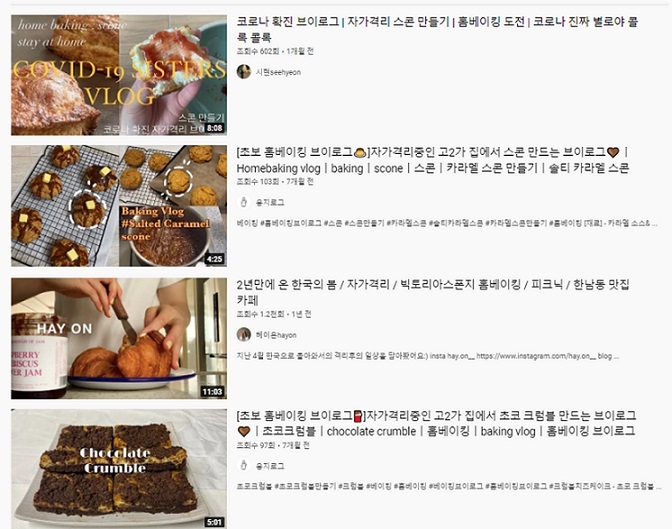 Seven days of home isolation not only pushed COVID-19 patients to find new hobbies. Some gained new perspectives on life, the environment and relationships.

Kim Jin-hyeon, a 33-year-old mother of two children, came to realize how reliant she is on plastic goods in everyday life.

As waste disposal is not allowed during isolation, she has had to keep all plastic bottles and containers from food deliveries stacked in a corner of her home.

“All members of my family got infected with COVID-19 earlier in March and we heavily depended on delivery services for food and groceries. Since almost every item that I ordered came in plastic containers, there was a huge amount of waste,” she said. 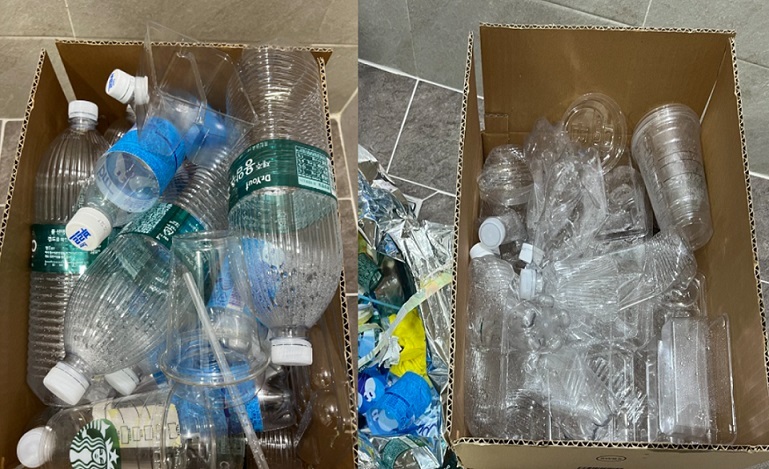 “I was a bit worried over people’s reliance on disposables amid the virus crisis and its impact on future generations,” Kim said, adding that she has decided to switch over to stainless steel drinking straws for children for starters.

COVID-19 has made 34-year-old kindergarten teacher Oh Hye-seung rethink her relationships with people around her.

When Oh became infected in February, one of her co-workers who lives in the same neighborhood, offered to pick up prescription medicines for her, while leaving boxes of strawberries on her doorstep.

“I didn’t really expect that someone at work would do such a thing for me because I had this belief that co-workers can’t be friends. I was so touched by her. The pandemic shook us out of our social ruts, but affection between people seems to be more important than ever,” she said.