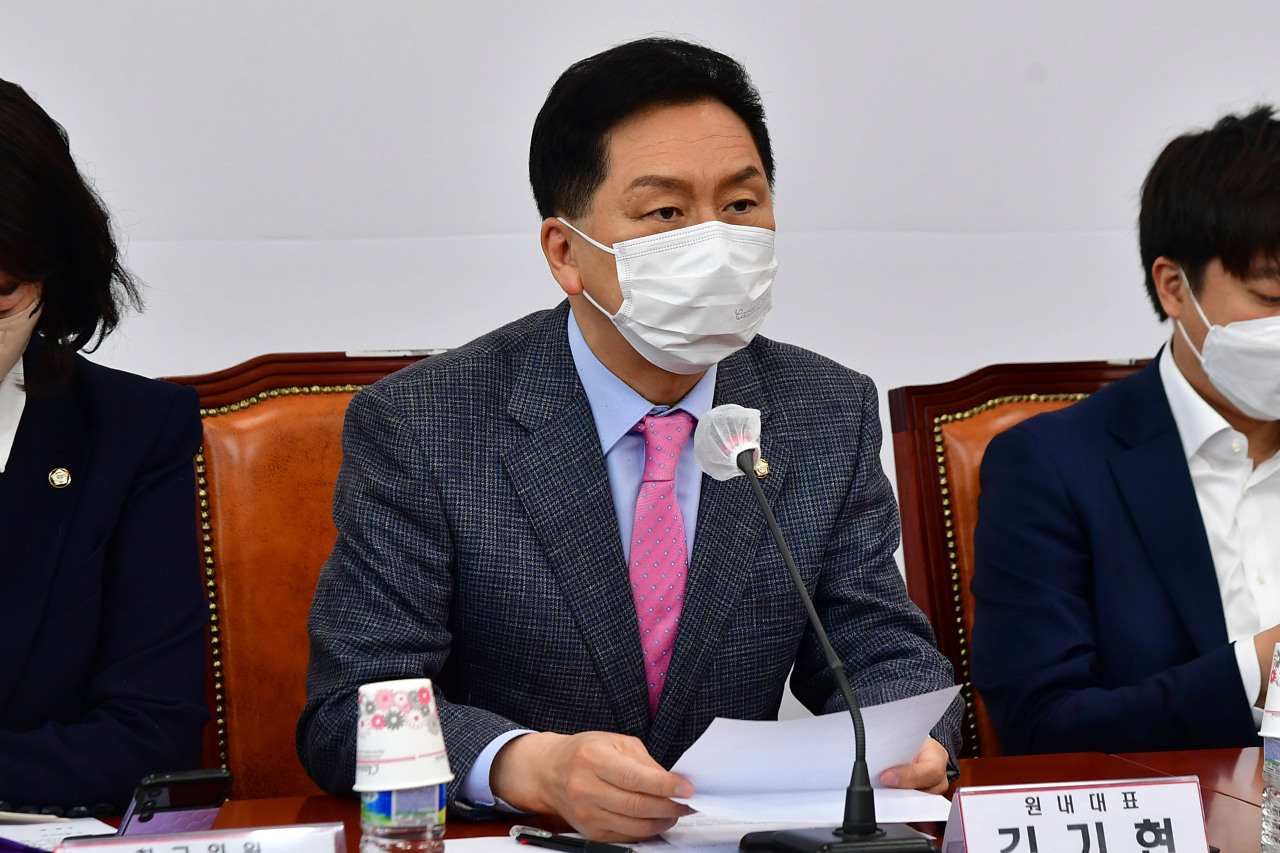 Rep. Kim Gi-hyeon, floor leader of the conservative People Power Party, speaks during a meeting of senior party officials held Monday inside the National Assembly in Seoul. (Joint Press Corps)
South Korea's conservative People Power Party is preparing to elect a new floor leader that is expected to face strong opposition from the liberal Democratic Party of Korea in the following year.

The party is holding an internal election on Friday, and its outcome will determine what direction the party will take with the new government and who to pick as key parliamentary supporters of the Yoon Suk-yeol administration that kicks off in May.

The new elected floor leader will face an uphill battle in the National Assembly, where the People Power Party, controlling 110 out of the 300 legislative seats, has to compete against its main rival Democratic Party with 172 seats.

The Democratic Party warned it would strongly oppose nominations for ministerial posts under the Yoon administration, and the new floor leader would have to corral People Power Party legislators in voicing a unified opinion and strategically combat dissent against nominees expected from the liberal bloc.

While ministerial nominations do not necessarily require endorsement from the parliament to transition into official appointment, the People Power Party worries it may face the same criticism as the Moon Jae-in administration did throughout the past five years if without ample preparations to combat dissenting voices in parliamentary hearings.

The floor leader election was originally slated to be held near the end of this month following the end of the one-year term for Rep. Kim Gi-hyeon. But Kim offered to resign from the post last week as he wanted the party to quickly elect a new leader and run under fresh leadership as the government changes hands.

It is believed the party changed tack as the Democratic Party already elected Rep. Park Hong-keun as its floor leader.

Reps. Kim Tae-heum, Kweon Seong-dong and Kim Do-eup stand as the three most likely candidates for the floor leader post, sources told The Korea Herald, and each figure possesses strengths needed to work with the minority government and strong parliamentary opposition.

Kim Tae-heum was the first to officially announce his intent to run in the internal election in a press conference Monday. The three-term lawmaker does not have close ties with Yoon but is touted as a figure with solid relationships with most of his fellow lawmakers within the same party.

His extensive acquaintance with parliamentary colleagues could be considered as a key strength in consolidating forces in the legislative branch when negotiating terms or striking deals with the Democratic Party.

Kim Do-eup is contemplating his bid for the floor leader post after receiving backing from other People Power Party lawmakers, sources said. The three-term lawmaker was commended for smoothly carrying out negotiations with the liberal bloc and leading policymaking decisions among legislators with the conservative party.

Separate sources also put Kweon forward as a potential candidate for the floor leader post due to his close ties with the president-elect. The four-term legislator has not made any official comments on the matter, but he is seen as a figure well suited to orchestrate harmony with the administrative branch.

The People Power Party is planning to make an official announcement for the election Tuesday and open registration for candidates throughout Wednesday. The election is due to start at 10 a.m. Friday, but could begin earlier depending on the duration of the election.