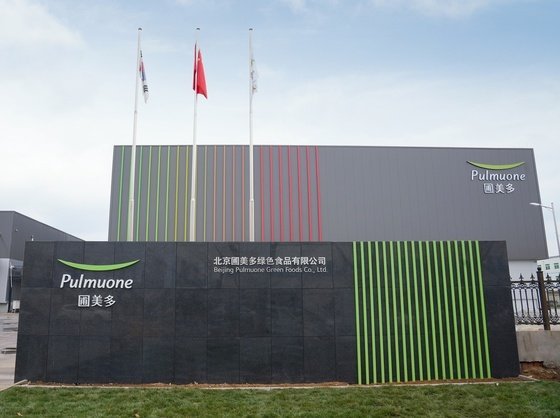 Located in the eastern Beijing of Pinggu, the new factory can produce 1,800 kilograms of tofu annually, increasing the productivity by 400 percent compared to the old factory.

The second factory will produce a variety of tofu for soup, salad and steamed dish, tofu noodle, and soybean milk, according to the company.

The existing first factory, which was built in 2012, will be the forefront of manufacturing Home Meal Replacement products such as udon, cold noodles, rice cakes and pasta. With relocating the production line, the factory can produce 100 million pastas annually, up by 122 percent from 45 million.

“(With the new tofu factory,) we plan to expand tofu and other fresh food production there,” said Pulmuone CEO Lee Hyo-yul in a statement. “We will build additional HMR production facilities in Chongqing, Shanghai and southern regions as well.”

Market insiders say demand for tofu and HMR has soared in China due to shutdowns during the coronavirus pandemic.

A year after, the company reported a record high sales revenue of 103.3 billion won and 9.3 billion won in net profit. The company said last year’s stellar performance was largely driven by big burst in sales of refrigerated pasta, which increased by 55 percent compared to 2020.

Since 2017, Pulmuone has produced and supplied tofu to major Chinese cities including Beijing, Shanghai, Guangzhou and Shenzhen.