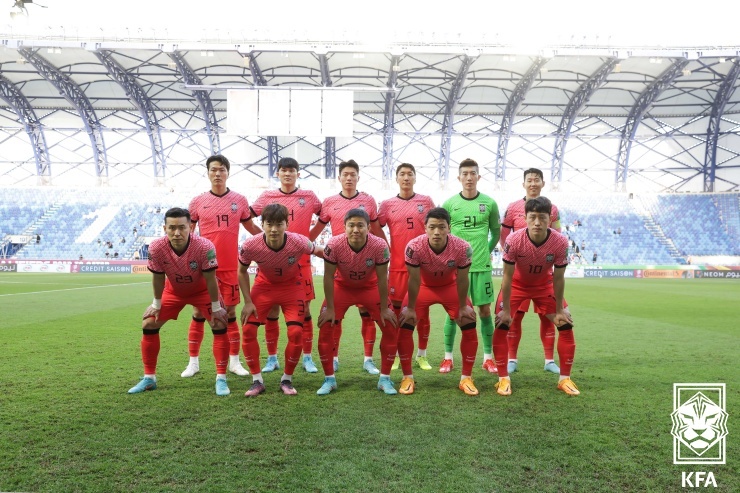 The starting members for South Korea pose for a group photo before their World Cup qualifying match against the United Arab Emirates at Al Maktoum Stadium in Dubai on March 29, 2022. (Korea Football Association)
South Korea will take on Portugal, Uruguay and Ghana in the group stage of this year's FIFA World Cup in Qatar.

The draw for the Nov. 21-Dec. 18 tournament took place Friday at the Doha Exhibition and Convention Center in Doha, the capital city of the host country, Qatar. South Korea, competing in their 10th consecutive World Cup and 11th overall, ended up in Group H. 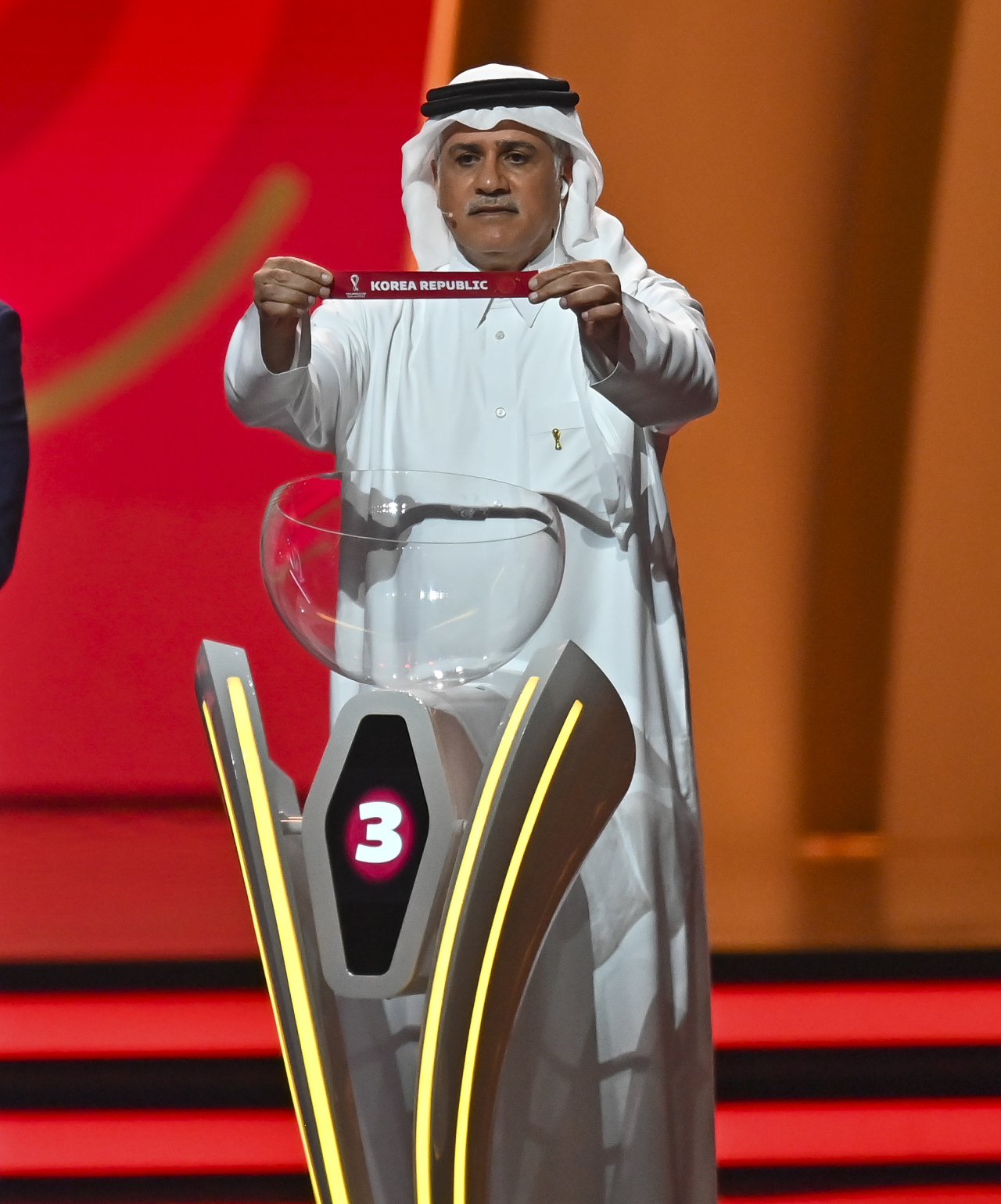 Former Qatari football international Adel Ahmed MalAllah holds up the name of South Korea during the 2022 FIFA World Cup draw at the Doha Exhibition and Convention Center in Doha on April 1, 2022. (Xinhua-Yonhap)
South Korea are the only Group H team to play all three matches at one stadium. Portugal will play at three different sites.

South Korea beat Portugal 1-0 on June 14, 2002, to advance to the round of 16 for the first time. This remains the only meeting between the two countries so far.

South Korea have split six matches against Ghana with three wins against three losses. The two countries have not faced each other since June 2014, when Ghana blanked South Korea 4-0.

South Korea have managed one win, one draw and six losses against Uruguay. And it was Uruguay that knocked off South Korea in the round of 16 at the 2010 World Cup in South Africa with a 2-1 victory. Luis Suarez scored both goals in that win, and the striker for Atletico Madrid remains a dangerous offensive weapon at age 35.

Most recently, South Korea prevailed 2-1 in a friendly match at home in October 2018.

Uruguay won the inaugural World Cup in 1930 and added another title 20 years later. This will be their 14th World Cup tournament.

La Celeste have reached the knockout phases at each of the past three tournaments.

Ghana will play in their fourth World Cup. The Black Stars are the lowest-ranked nation among the already-qualified teams, though New Zealand, ranked 101st, are still alive in one of the two intercontinental playoffs

South Korea qualified for this year's tournament by finishing second in Group A of the final Asian qualification round, which concluded on Tuesday.

There will be 32 teams divided into eight groups of four, and

28 teams have qualified for the tournament so far, while Qatar received an automatic berth as the host nation and were dropped into Group A.

The remaining three spots will be filled by winners of the European playoffs and the intercontinental playoffs in June.

From the group stage, the top two countries from each group will reach the knockout phase.

South Korea have made it out of the group stage twice, reaching the semifinals in 2002 as co-host with Japan, and the round of 16 in 2010 in South Africa. (Yonhap)