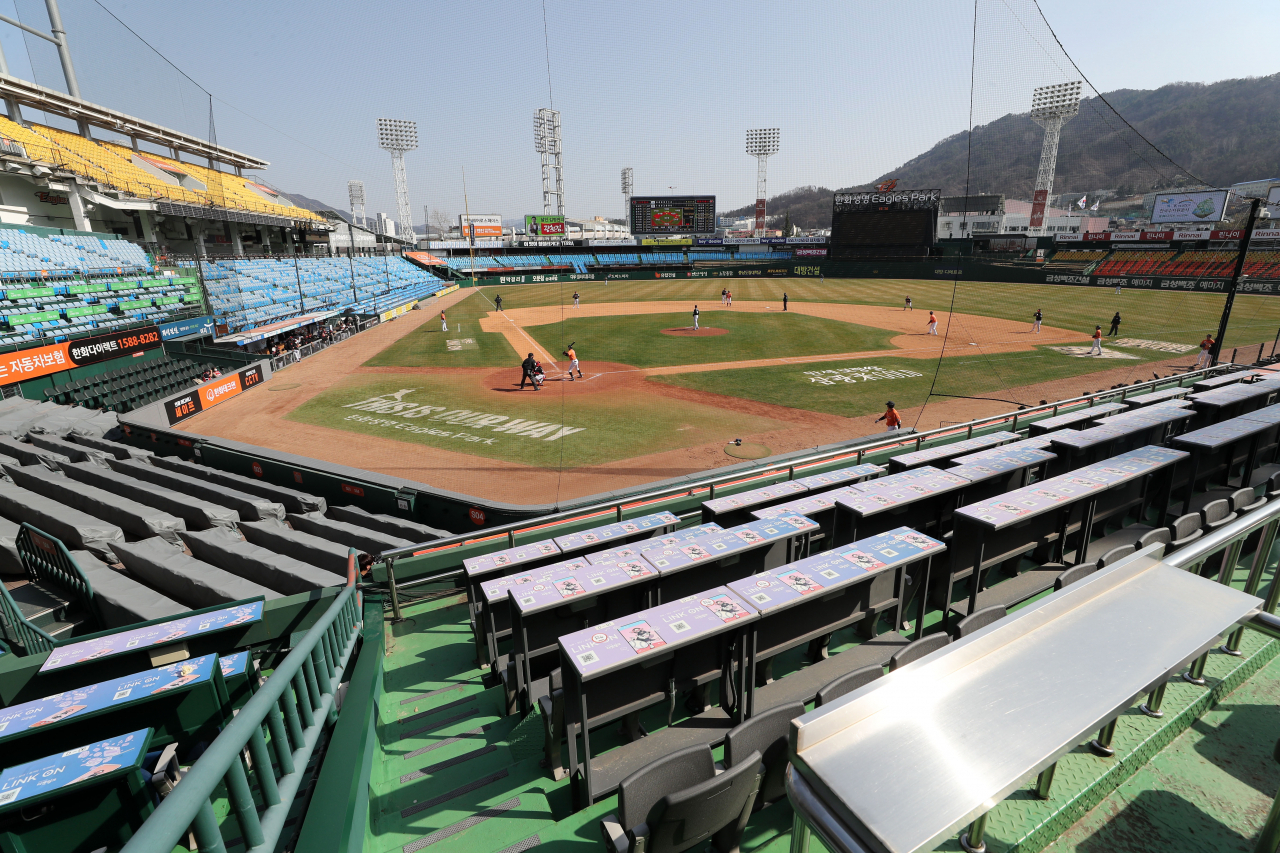 This photo taken Tuesday, shows Hanwha Life Eagles Park in Daejeon, some 160 kilometers south of Seoul, during a Korea Baseball Organization preseason game between the Hanwha Eagles and the LG Twins. (Yonhap)

The South Korean baseball league said Thursday it will have a new tiebreaker game for the final postseason spot in the case of a tie between two teams.

The new play-in game is one of several changes announced by the Korea Baseball Organization (KBO) ahead of the 2022 regular season, which begins Saturday with all 10 teams in action.

In the KBO, the fifth-best team in the regular season faces the No. 4 seed in the wild card game. But if two teams are tied for the fifth spot, then they will play one do-or-die game to break off the tie.

However, if there are three or more teams tied for fifth spot, there will be no play-in game. They will instead go to a tiebreaking formula in the following order: the head-to-head record, runs scored in head-to-head meetings, and records from the 2021 season.

Also in 2022, the KBO will employ two additional officials in its video replay center, bringing the total to five. Each of the five games on any given day will have a dedicated replay official in charge, which the KBO said should speed up reviews in case of simultaneous requests from different stadiums.

Entering its third season during the COVID-19 pandemic, the KBO said it will try to avoid suspending the season, even with multiple positive cases from teams. Games will only be canceled if a team is unable to dress 28 players, including at least two catchers. Teams will be allowed to call up minor leaguers and undrafted players on developmental contracts to fill vacant spots.

If three or more teams are unable to dress 28 players at the same time, the KBO will then convene a board meeting to discuss the possible suspension of play.

The KBO added that there will be no doubleheaders or Monday games this year. In an attempt to squeeze games into a tighter window over the past two years due to the pandemic, teams were forced to play two in one day and also play occasional games on Monday, typically an offday in the KBO.

Teams will also return to playing extra inning games until the 12th inning. All tie games ended after the regular nine innings in the second half of last year, in an attempt to protect players during a rush to complete the season on time. (Yonhap)