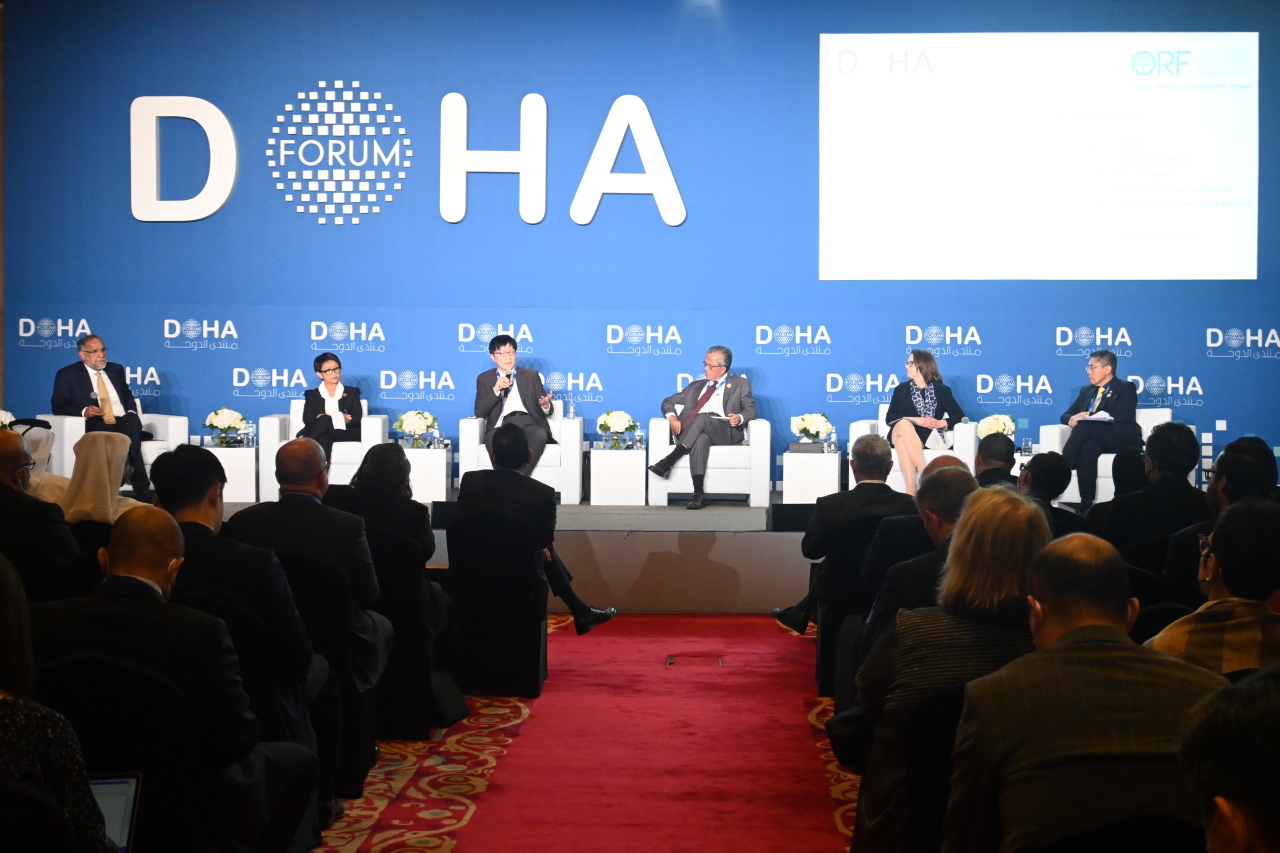 Started in the year 2000, Doha forum is aimed to launch dialogue on critical challenges facing the world, promote the exchange of ideas and policy-making and provide viable recommendations.

The emir urged cooperation amongst the global community to more effectively address the issues of the day.

“It is incumbent on all of us to determine the future of the international order and ask: what is the shape of the world we want for our children?” emphasized Al Thani.

In a surprise appearance, Ukrainian President Volodymyr Zelenskyy dialed into the opening session of Doha forum, echoing the call for unity.

“We have to protect the international order, not just for Ukraine, but for Afghanistan, Syria, Yemen ...” said Zelenskyy.

The Ukrainian president called for more efforts to end Russia’s aggression against Ukraine.

“Russia is deliberately bragging they can destroy with nuclear weapons, not only a certain country but the entire planet,” Zelenskyy said, highlighting that sacred month of Ramadan should be not overshadowed by the misery of Ukraine people.

Maldives Foreign Minister Abdulla Shahid spoke too of “a time of fragility… (when) our world faces multiple armed conflicts, nuclear proliferation, and the widening impacts of climate change.” 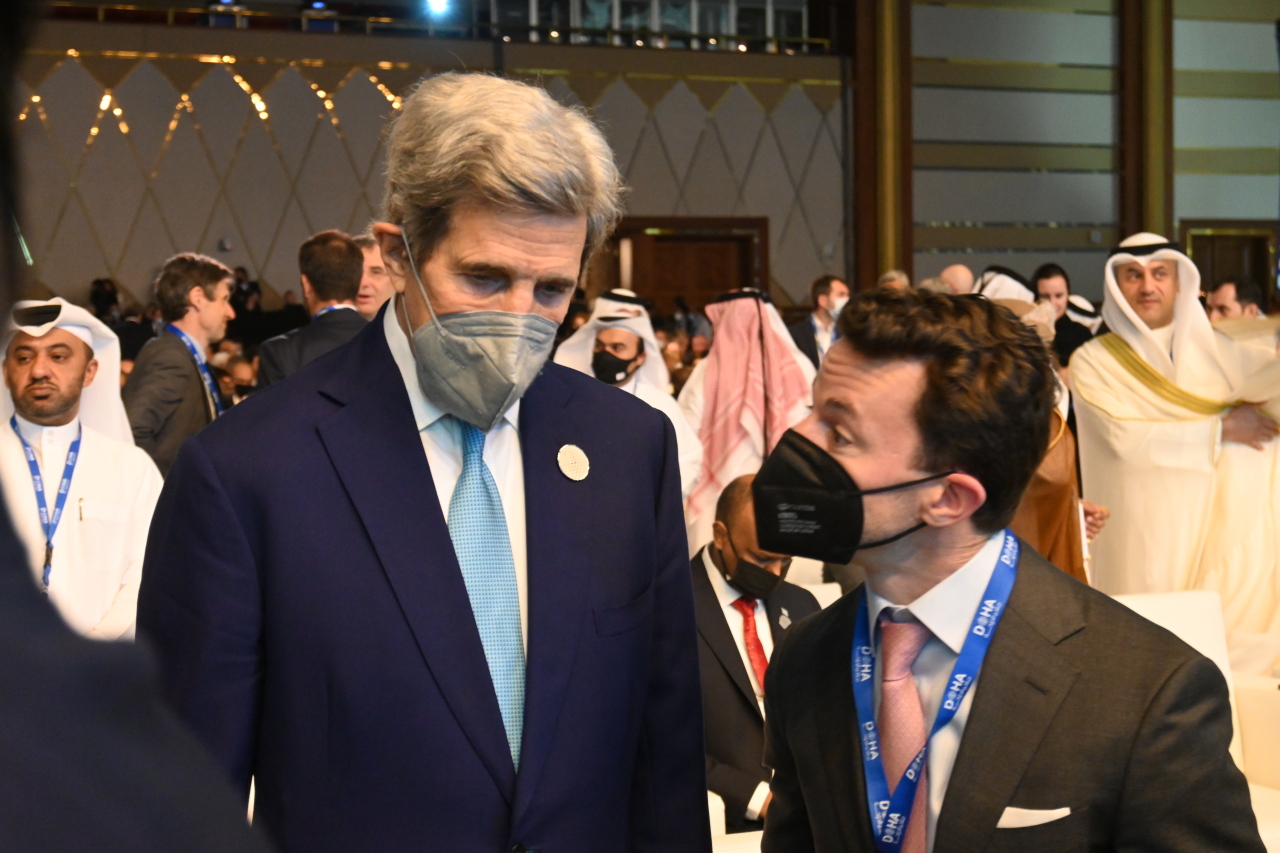 US climate envoy, former US Secretary of State John Kerry attends the Doha Forum 2022 in Doha. (Sanjay Kumar/The Korea Herald)
This year, the forum welcomed more than 200 speakers to debate some of the world’s most challenging issues, particularly the forum’s key theme of “Transforming for a New Era.”

“We stand in solidarity with the millions of innocent people and refugees who are victims of this unjust war and geopolitical calculations,” said Al Thani adding humanity cannot accept the scenario of great countries competing in developing new types of weapons.

“We believe that social justice is the real shelter for societies, and this requires fair tax policies, because the majority of societies cannot dispense with state services,” according to Al Thani.

The emir affirmed his solidarity with the millions of innocent people and refugees who have fallen victim to the war.

Doha forum hosted more than 350 international and local media this year featuring exhibition by Digital Citizen Fund’s BRITE (Building Resilience Through Innovation, Technology, and Education) Initiative, dedicated to the provision of STEAM education for women and girls in Afghanistan, as well as other developing countries. 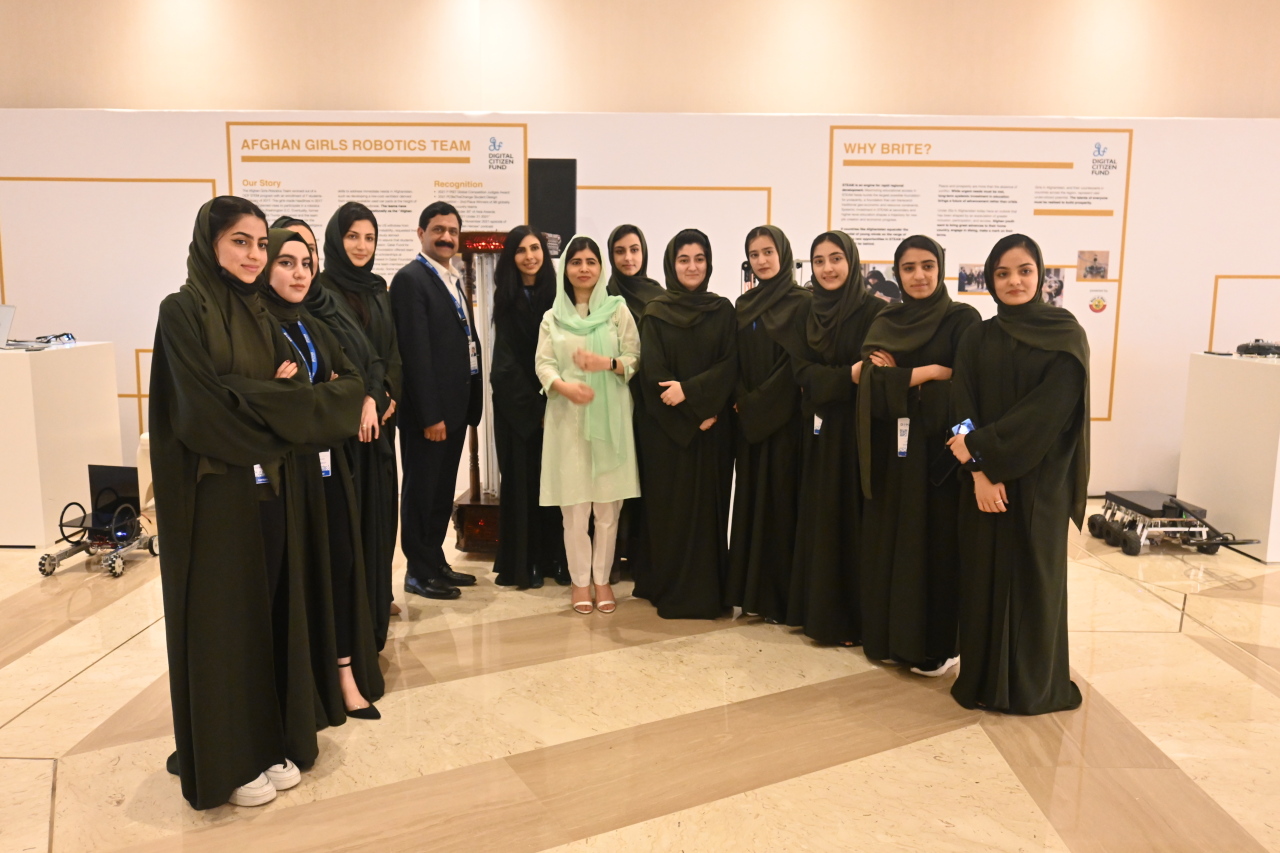 Pakistani activist for female education and Nobel Peace Prize laureate Malala Yousafzai interacts with participants at Doha Forum on Sunday. (Sanjay Kumar/The Korea Herald)
Powered by Qatar Ministry of Foreign Affairs of the State of Qatar, the exhibition presented work of the Afghan Girls Robotics Team -- the “Afghan Dreamers” -- as well as work from students engaged in other BRITE educational programming.

This year’s forum saw a number of discussions and events take place on the sidelines. The Qatar-Africa Business Forum brought together political and business leaders discussing the burgeoning relationship between Qatar and countries within Africa and explored opportunities for further collaboration.

The global sports program organized a high-level roundtable discussion on the protection of major sporting events and the use of sports’ values for the prevention of violent extremism. 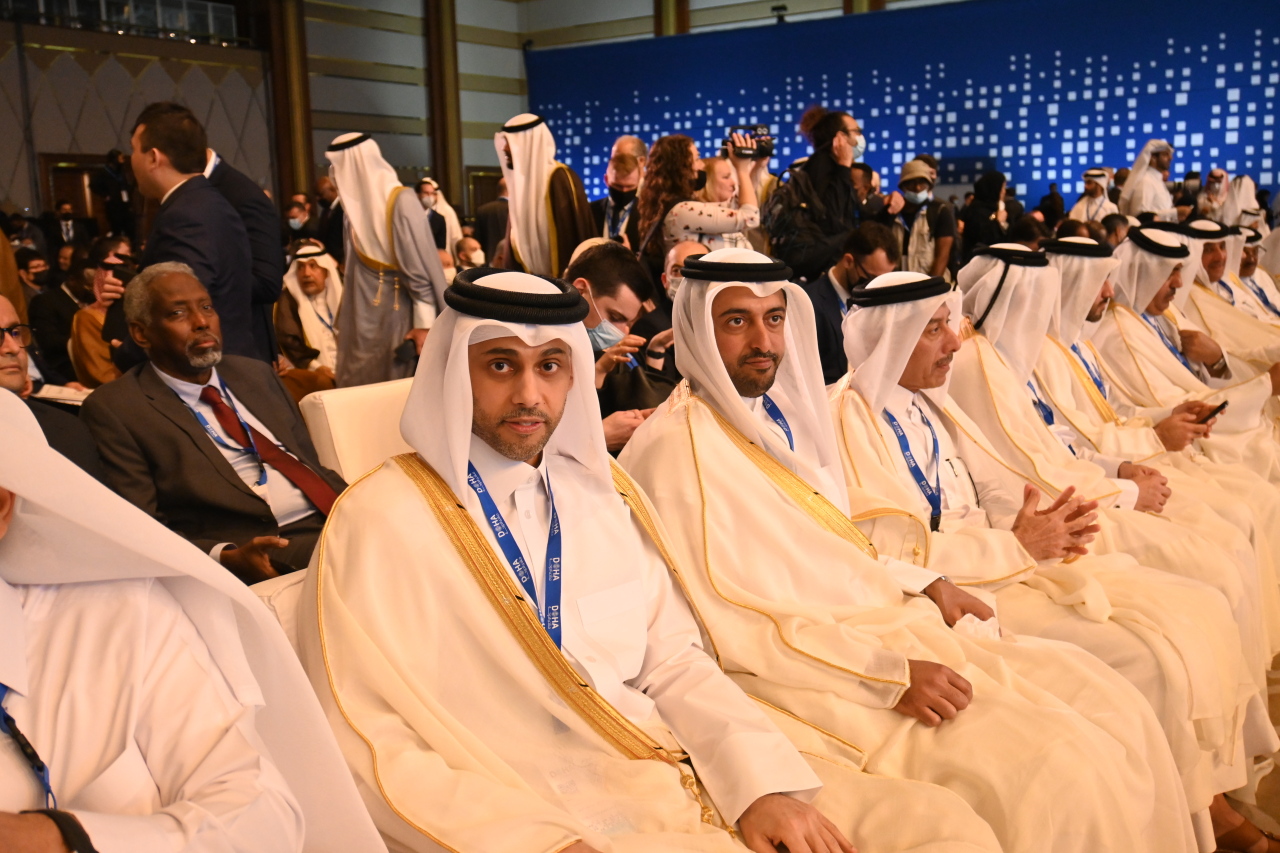 Qatar Ambassador to Korea Khalid Ibrahim al-Hamar attending the opening ceremony of Doha Forum on Saturday. (Sanjay Kumar/The Korea Herald)
More than 30 agreements were signed during the forum, including the agreement for content exchange between The Korea Herald and The Peninsula on the sidelines of Doha Forum 2022.

“We cannot be isolated from what is happening around us in the world. … Qatar has been building a track record in dialogue and diplomacy,” said Sheikh Mohammed bin Abdulrahman Al-Thani, the deputy prime minister of Qatar.

Echoing the Qatar deputy prime minister, Prince Faisal bin Farhan Al Saud, the foreign minister of Saudi Arabia, said that the importance of involving the global north and south, “particularly smaller and middle powers in … addressing the needs of all rather than the needs of a few … to work together in setting the global agenda.” 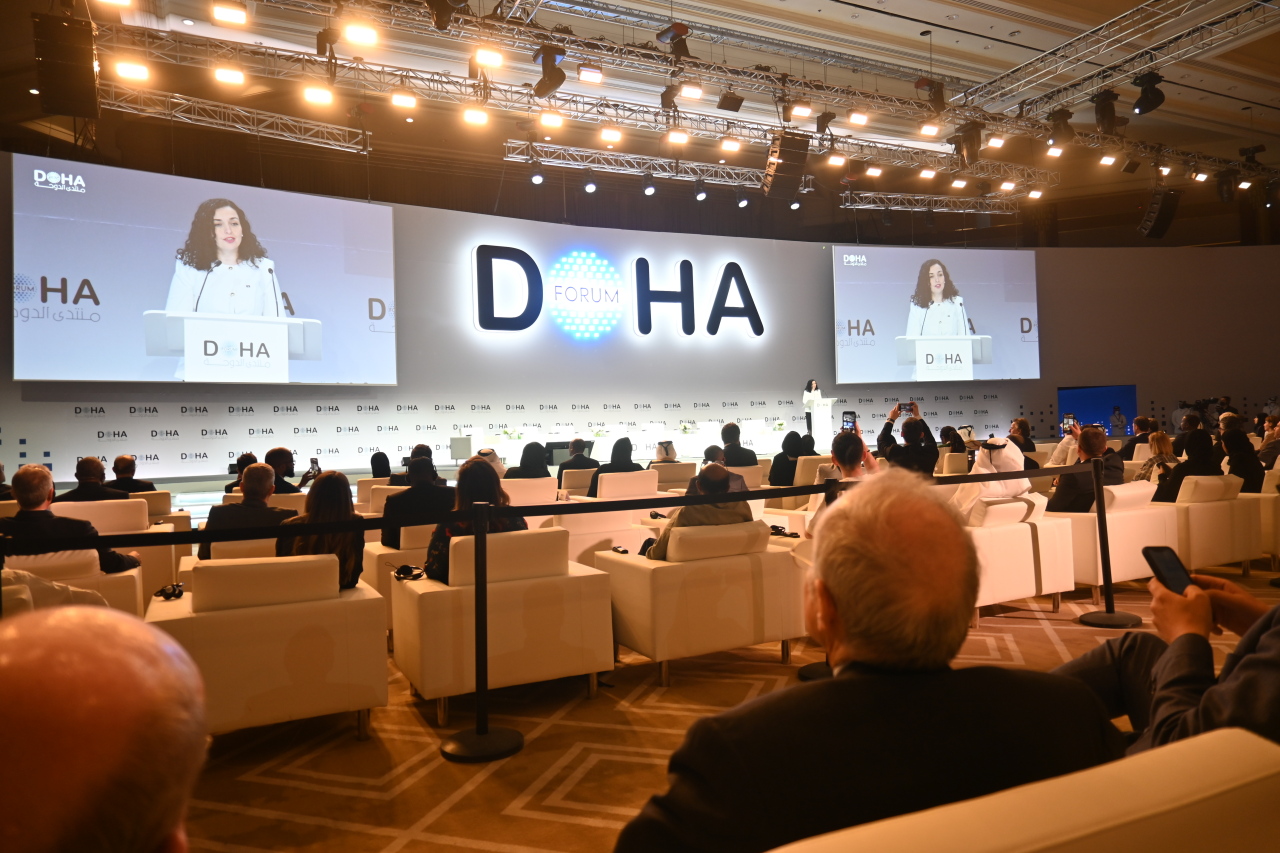 Kosovan President Vjosa Osmani addresses during the closing ceremony of Doha Forum at Sheraton Grand Doha Resort and Convention Hotel in Doha, Qatar, Sunday. (Sanjay Kumar/The Korea Herald)
At the closing ceremony of the forum Kosovan President Vjosa Osmani shared his experience of multilateralism, when the international community responded to the conflict In the Balkans, ending the war, saying “with history constantly being made and new alliances being formed … multilateralism has never been more important. If we want to transform for a new era, we need to do it hand in hand.”

The forum hosted more than 2000 guests in Qatar, including more than 200 panelists from 142 nationalities and 104 countries, contributing to more than 50 sessions across the two-day event.