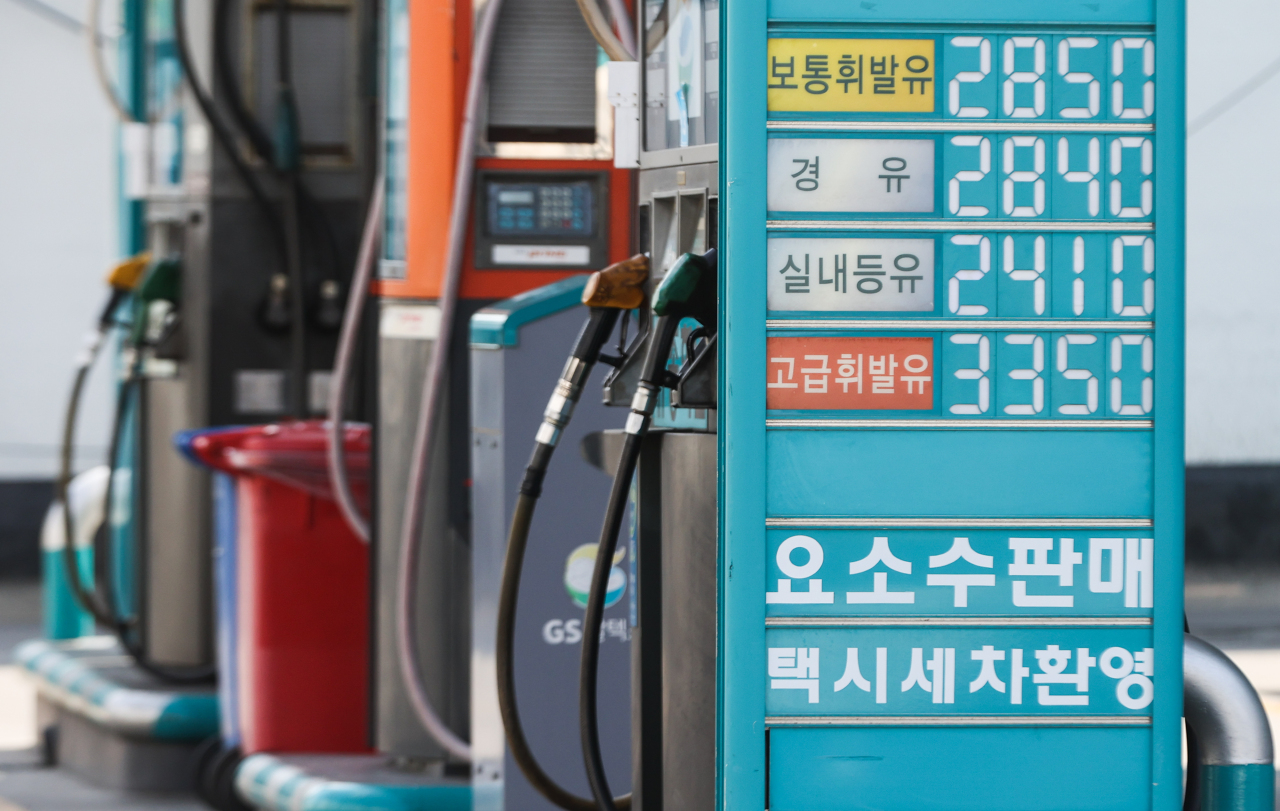 A signboard at a gas station in Seoul shows a spike in prices of gasoline and diesel. While the nationwide barometer climbed to 2,001.15 won ($1.63) and 1,920.44 won per liter, respectively, prices of the products in some districts of the capital hover over 2,800 won as of Sunday. (Yonhap)
SEJONG -- Spiraling international energy prices have been increasingly undermining the trade balance of South Korea, which posted deficit for the first 79 days of the year on a cumulative basis.

According the Korea Customs Service, the nation’s imports of three major energy resources -- crude, gas and coal -- came to $38.4 billion during the period of Jan. 1 - March 20. This marked an 85.4 percent surge compared to the same period of 2021.

The sharp growth in imports was attributed to a spike in raw materials prices. Alongside fast growing demand during the process of normalization amid the pandemic, the Ukraine-Russia war has fanned inflation.

Russia produces about 12 percent of crude and 17 percent of natural gas for the global market. Its invasion of Ukraine and the following economic sanctions on Russia by the global community have aggravated price growth.

Economists say the surge in energy prices is projected to weaken the state trade balance as well as posing a heavy burden on both businesses and households.

A research fellow at the Korea Development Institute was quoted by a new outlet, as saying that “high imports prices pull down the current account surplus, or could be in the red.”

He also said that the spike in raw materials prices, which have been reflected in producer prices and consumer prices, would cause an inflationary pressure.

Korea recorded a trade deficit of $5.97 billion over the first 79 days of the year, while the figure for the corresponding period of 2021 was a surplus of $6.6 billion.

The government, in its unveiling of economic policy directions for 2022 last December, forecasted that the nation would post a current account surplus of $80 billion. But the surplus could be smaller than expected in light of the current situation.

The government had predicted that Dubai crude would trade at an average of $73 per barrel this year. But prices of international crude, including Dubai, Western Texas Intermediate and Brent, are hovering around $110.

The nation’s consumer prices posted growth of 3-percent range for five consecutive months, including a 3.7 percent growth in February. In particular, petroleum products had the effect of raising consumer prices by 0.79 percentage point.

More and more market insiders forecast that consumer prices growth would be steeper this month and the next.