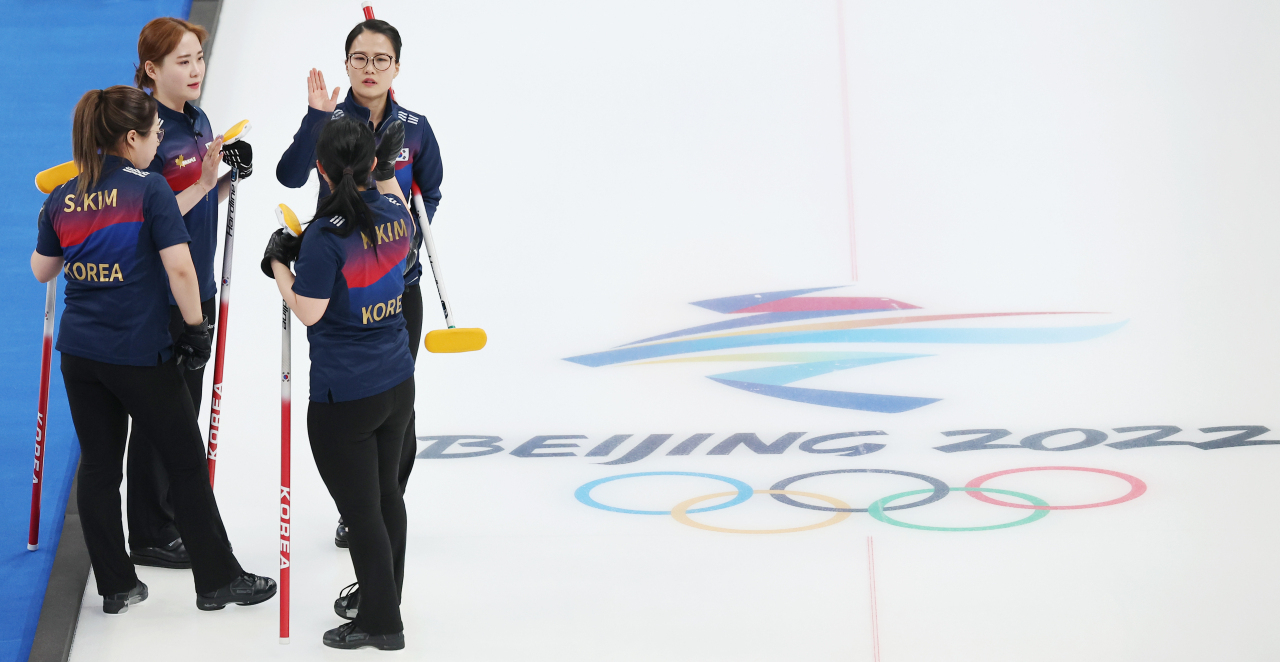 South Korean women's curling team shares high-fives during a match against the Russian Olympic Committee at the National Aquatics Center in Beijing on Feb.12. (Yonhap)

South Korea has claimed the silver medal at the women's curling world championships, falling to Switzerland in a hard-fought final but still posting the country's best-ever finish at the annual competition.

This was South Korea's first appearance in the final of any curling world championship, women's, men's or mixed doubles.

South Korea performed much better at the worlds, going 9-3 in the round robin to advance directly to the semifinals.

South Korea then beat host Canada 9-6 to set up the gold medal contest against Switzerland, which had beaten South Korea 8-5 in the round robin. And skip Silvana Tirinzoni and her team wouldn't be denied in their three-peat attempt, while winning their third consecutive title with an unbeaten, 14-0 record.

"We gave up three points early and had to play catch up the rest of the way," Kim said. "But we fought back and we were tied until the final end. I am proud of the fact that we made it to the final and competed at such a high level."

After the teams played a blank first end, South Korea missed a double takeout by inches with the last stone in the second end. That allowed Switzerland to pick up three points with Alina Paetz's successful draw with the final rock.

South Korea responded with a point in the third end, but Switzerland got the hammer back for the fourth end while leading 3-1.

And Switzerland quickly restored its three-point lead at 4-1 in the fourth end.

But South Korea scored two points in the fifth end to make it a 4-3 game, thanks to skip Kim Eun-jung's well-executed draw.

Switzerland had the answer with a point in the sixth end to build a 5-3 lead. Then the seesaw match ensued.

Kim came up with another impressive draw in the seventh end for two points that knotted the score at 5-5. Switzerland then took the lead back at 6-5 after a point in the eighth end.

South Korea settled for one point in the ninth end while holding the hammer, after a pair of early mistakes while trying to put up a guard.

The teams were tied at 6-6 entering the 10th end, but Switzerland had the hammer. South Korea had two stones in the house at the end, but Paetz knocked both out of the area with her final rock to complete Switzerland's three-peat. (Yonhap)