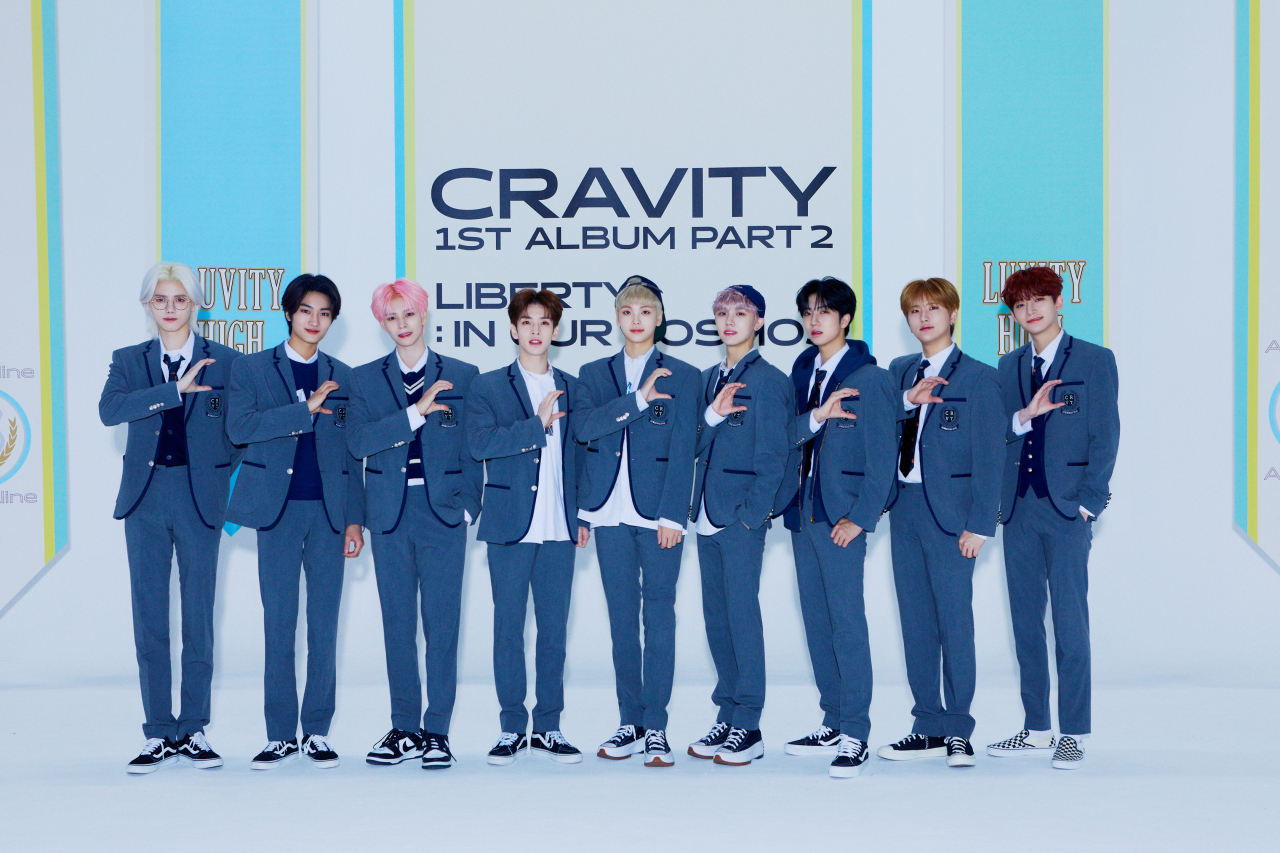 K-pop boy band Cravity poses for pictures during a press conference held in Seoul on March 22. (Starship Entertainment)
Boy band Cravity dropped its latest album “Liberty: In Our Cosmos” on Tuesday, making a return to the music scene after a seven-month hiatus. Originally scheduled to be released on Feb. 22, the album was delayed after the whole group tested positive for COVID-19 just a few days prior.

Ahead of the album’s release at 6 p.m. on Tuesday, the nine-member act conducted an online press conference livestreamed via YouTube.

“Everyone is back in good condition, and we all suffered only mild symptoms and sore throats. Because we all were all had the virus, a lot of the people around us, including our fans, were very concerned, and we were able to recover fast thanks to everyone,” the group’s leader Serim said.

“We tried to see the bright side of the situation and took it as a chance to look back on ourselves and prepare even more. As our fundamental goal is to improve and grow with every release, it was good in that sense,” Woo-bin said.

“Liberty: In Our Cosmos,” is the second part of the band’s first full-length album, picking up where the first part, “The Awakening: Written in the Stars,” left off in August. The LP tells the story of how the group has matured over time and has come together as a team.

According to Min-hee, the album can be best described as “youth” -- a concept that he believes allows them to do their best.

“It’s about high school kids. The album shows the emotions of free-spirited rebels, going against reality and making the most of life and growing inside it,” Min-hee said.

Won-jin said, “If the first album was about us yearning for freedom, the new album shows us completely free and enjoying that freedom.”

Fronting the album is the lead track “Adrenaline,” a multi-genre score of punk, future house, trap and moombathon that fumes with explosive and vibrant energy expressing the boys’ moment of freedom.

“We proved our capability at showing all kinds of concepts with the last album, so with this one, we focused on ideas like ‘youth,’ and ‘fresh,’” Won-jin said.

The team’s rappers, Serim and Allen, took part in the writing of the lyrics for the lead song.

“I wrote the line, ‘The feeling of adrenaline running in me doubles when I see you,’’ Serim said about his part.

Allen added, “I depicted ‘you’ (in the lyrics) as ‘adrenaline,’ and used it to express how I am becoming addicted to the feeling of a rush of ‘adrenaline’ through the lyrics.”

“I knew that Starship (the act’s agency) had taken out its big guns the instant I heard the song. We knew that this was a song we had to do,” Min-hee said.

Regarding the music video, Tae-young picked the scene where the nine members all jump high into the sky, making V shapes with their legs, as a highlight. “I think people will feel the adrenaline rush in that part.”

Their labelmate Exy from girl group WJSN took part in the writing of lyrics for “Chandelier” and also directed the song’s recording.

“I feel it’s a part of finding the right colors for Cravity. I hope I can go beyond writing the rap parts and participate in the production.”

Serim pointed out that the other members were also working on writing songs and lyrics. “We have released five albums in the two years since we made our debut, and I think Cravity has pushed the envelope musically over that time period. I’m sure that it won’t be long until the songs that we have written ourselves are included in our albums,” the leader said.

Having debuted in April 2020 with its EP, “Hideout: Remember Who We Are,” Cravity landed successfully into the K-pop scene as Starship Entertainment’s rookie boy band.

With the new album, the boys hoped to see a new career high. The group marked their highest initial week album sales of 100,000 units with the first part of the LP last summer and expectations are high that they will renew their record with part two.

“Although numbers aren’t everything, it felt good to hear the word ‘career-high,’ and we hope to feel that again with this album. We hope our name, Cravity, stays long on Billboard and other music charts, in and out of the country, this time,” Seong-min said.

“I think we’re still dashing towards our goal. Although we still have more room to grow, we’ve definitely improved in many aspects -- in our chemistry between the members, and in our performances and singing. Our original goal was to debut and make albums, and now we want to stand proudly in front of our fans as an all-around group,” Tae-young said.

Overcoming difficult times together, the bandmates have grown closer than ever, just as in the new album. “Our relationship is really tight now. It really feels like we’re a family,” Jung-mo said.

April will see a huge turning point for Cravity as the band reaches the second anniversary of its debut and also holds its first standalone concert, titled “Center of Gravity.”

Won-jin said, “The concert has been on our bucket list since before our debut, so we’re very much looking forward to it. We will be communicating with fans through an online livestream as well and we’ve put in a lot of our opinions into shaping the concert. We know what our fans want the most, and that was the most important part in planning the upcoming show.”

The concert will take place in Seoul on April 2 and 3.