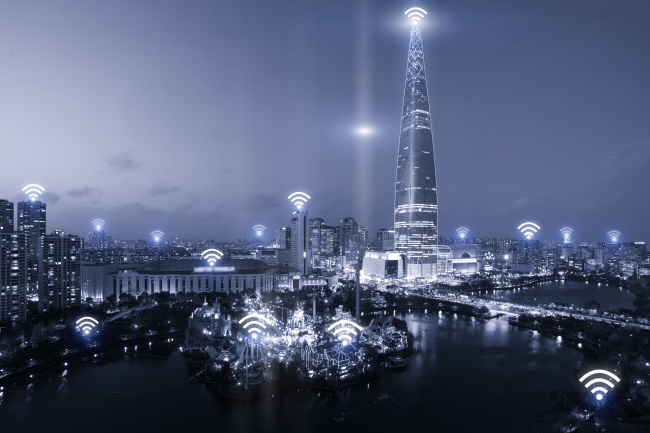 A visual concept image of Wi-Fi connection in Seoul (123rf)
South Korea is now experiencing a digital skill shortage among employers here as the country -- considered one of the most wired in the world -- is seeing local workers’ digital skills largely outdated in the wake of the cloud era, an estimate showed Tuesday.

Over the next year alone, roughly 10 million more people in South Korea are estimated to require digital skills training, according to an estimate by consulting firm AlphaBeta.

This is equivalent to some 37 percent of the workforce across the nation, AlphaBeta added. Based on a survey of 2,166 employers in seven countries -- Australia, India, Indonesia, Japan, New Zealand, Singapore and Korea -- in August 2021, Korea’s share of those requiring digital skills out of the total workforce was the highest among the countries surveyed.

“The vast majority of this 10 million are those who already have some digital skills, but are required to refresh their digital skills over the next year in order to continue being productive,” Genevieve Lim, director at AlphaBeta, told reporters during a virtual conference.

“The remaining workers are those who do not have digital skills to date, but will (be required to) learn those skills in order either to become more productive in their jobs or to transition into better paying jobs.”

Lim defined digital skills as the ability to maneuver cloud-based tools, design cloud architecture and migrate its infrastructure to cloud. She added that these skills are under the spotlight in the wake of the COVID-19 pandemic and growing cybersecurity threats.

The survey also indicated a digital skills training shortfall in Korea, where there is high demand for employers to train workers, and the pace of training does not keep up with demand.

Although 96 percent of surveyed employers in Korea said that they were keen to train their workers more in digital skills, given benefits such as employee satisfaction and higher productivity, only 25 percent of these organizations have fully implemented a necessary training plan, according to Lim.

The survey was conducted upon the request of Amazon Web Services, a cloud computing platform operator arm of US tech giant Amazon. AWS has trained more than 100,000 individuals in Korea with cloud skills since 2017, the company said.