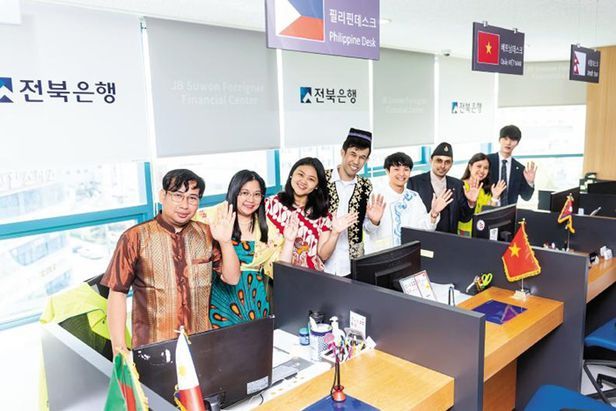 But they have recently started to acknowledge that foreigners here could diversify their revenue sources.

At the vanguard of the change is JB Financial Group, a more regional business compared to the four major commercial banking groups here -- KB, Shinhan, Hana and Woori -- but nonetheless has a strong network across the nation and overseas.

The group’s flagship commercial lender Jeonbuk Bank has recently eased conditions for its key loan product for foreign customers by including those with the H-2 visa, also known as the “Work and Visit Visa,” as eligible borrowers. Previously, only foreigners with an E-9 Non-professional Employment Visa were able to apply for the loan. The service lends up to 20 million won ($16,500) at an annual interest rate of between 11 and 15 percent. Though higher than the average interest rate of loan products offered by commercial banks to Korean citizens, it provides a safer option for foreigners here who often have to turn to less reputed options to borrow money.

Last year, the bank extended loans to 8,949 foreign borrowers, with the value of the total loans extended to them coming to 57.6 billion won as of end-February this year.

The bank currently operates its main financial center for foreigners in Suwon, Gyeonggi Province, and a second branch in the Dongdaemun area of Seoul with several foreign tellers from 11 different countries, mostly from the members of the Association of Southeast Asian Nations. It also has four lounges across Korea focused on foreign customers.

“Extending loans to foreigners is somewhat riskier for banks because it is not as easy to check their credit scores or assets here,” an employee at one of the four major banks here said on condition of anonymity.

“But we’re making efforts to change that,” the employee added.

Shinhan Bank, one of the top lenders here, launched its first savings account designed exclusively for foreigners in July last year. The term is one year and it allows customers to submit up to 3 million won per month, with an annual 1.85 percent yield. It is designed to automatically transfer the money to a foreign bank of the applicant’s choice upon maturity, distinguishing the product from all other savings accounts offered by competing banks.

“The product allows our foreign customers who choose to return to their homeland before its maturity to receive its benefits regardless of their location,” a Shinhan Bank official told The Korea Herald.

“Foreigners are eligible to open the same savings accounts as Korean citizens, but it’s the little details like these that matter sometimes. Some 2 million foreign residents in Korea are a new market for us.”

Shinhan and its rival KB Kookmin both also operate special loan products for foreigners seeking to rent houses for a certain period. They offer loans for Korea’s “jeonse” system, both of which were launched around 2020, to allow foreigners to borrow up to 200 million won. Jeonse refers to a two-year lease in which tenants pay landlords a lump-sum deposit and get it back when they move out.

While total value of loans extended to foreigners by Korean banks is unknown, the outstanding value of mortgage extended by the top five lenders here to the group came to 1.49 trillion won as of August last year, a financial watchdog data submitted to a lawmaker here showed in October 2021. The figure accounts for 0.5 percent of the total mortgage extended by KB, Shinhan, Hana, Woori and NongHyup, according to the Financial Supervisory Service data.