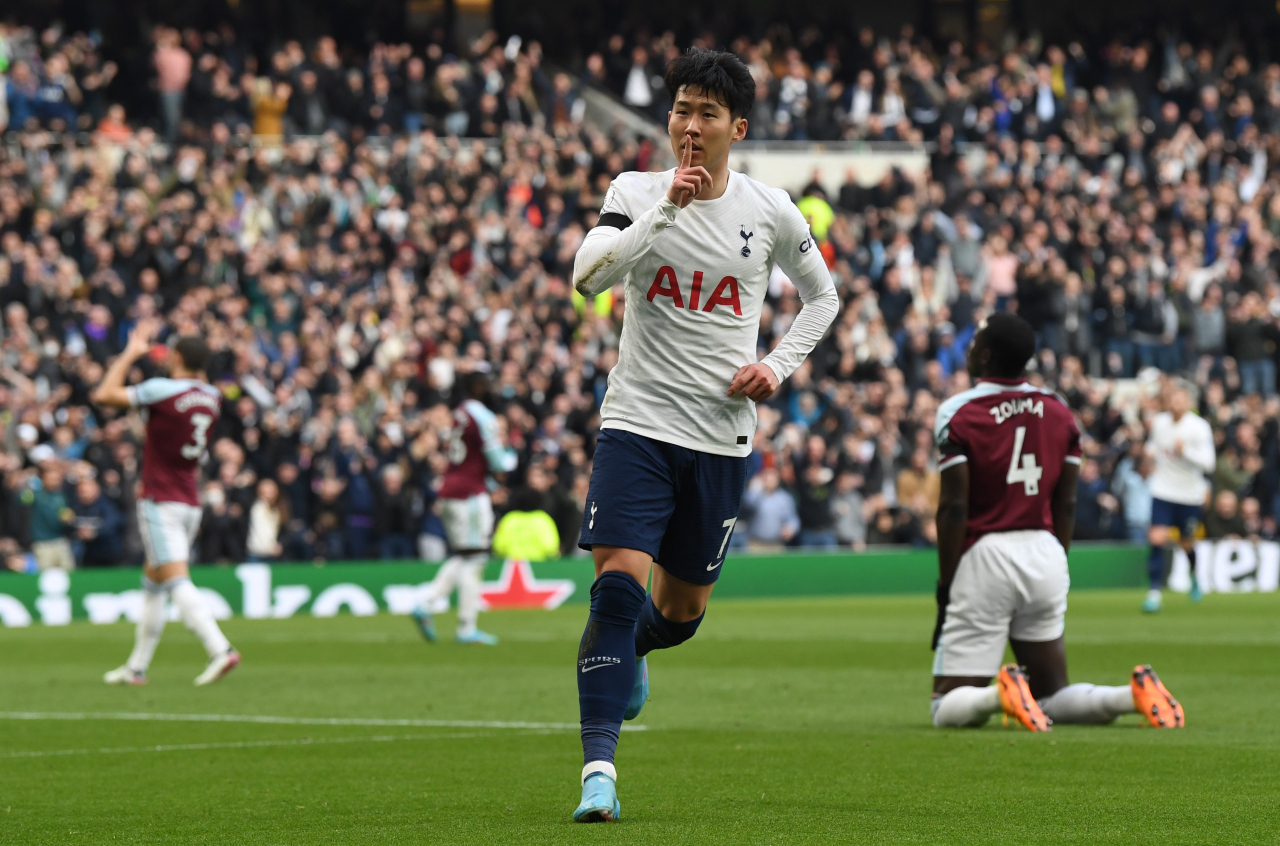 In this Reuters photo, Son Heung-min of Tottenham Hotspur celebrates after scoring a goal against West Ham United during the clubs' Premier League match at Tottenham Hotspur Stadium in London on Sunday. (Yonhap)

For the first time this season, Son Heung-min has scored twice in a match for Tottenham Hotspur.

Son's brace lifted Tottenham past West Ham United 3-1 in a Premier League contest at Tottenham Hotspur Stadium in London on Sunday (local time). Son found the back of the net in the 24th and again in the 88th minutes. With 13 goals this season, Son climbed into a tie for second place in the Premier League with Diogo Jota of Liverpool. They are seven back of another Liverpool star, Mohamed Salah.

Son's trusted partner Harry Kane assisted on both of the South Korean's goals, as the duo extended their own Premier League record for most combined goals by a pair of teammates to 39.

With their second straight victory and fourth win in their last five matches, Tottenham jumped from seventh to fifth in the tables with 51 points. They are three points behind Arsenal, which have played one fewer match with 28.

Tottenham took a 1-0 lead in the ninth minute on Kurt Zouma's own goal, as the West Ham defender ended up deflecting Kane's pass intended for Son into his own net.

Kane and Son finally connected midway through the first half. Kane's through ball sent Son in behind defenders, and Son fired the ball high past goalkeeper Lukasz Fabianski.

West Ham responded in the 35th minute, but Son put the finishing touch on the victory late in the match.

Kane headed a long goal kick from Hugh Lloris, and the ball found Son streaking in alone on Fabianski. Son made no mistake with his right foot from just inside the box.

Son said afterward his second goal was particularly gratifying because it gave Tottenham some much-needed breathing room late in the match, just as West Ham were threatening to level the score.

"The performance of the lads, effort, commitment were fantastic. I am really happy for that," Son said in an interview clip posted on Tottenham's official YouTube page. "The way we played from the first half and created so many chances, we should have scored many, many more goals than we scored, to be honest. Totally, we deserved this win."

With Tottenham now closing in on a top-four spot, and thus a berth in next season's UEFA Champions League, Son said it was important for his club to block out noise from outside and focus on their season.

"It's not really important what people outside are saying. We need to stick together and keep going our way," he said. "I am happy we're progressing every day. (The players') commitment off the pitch is incredible. It's been a joy to watch them and to work with them. You don't have to be affected by people from outside the stadium. Everyone should stick together and support each other. We don't have time to be negative."

The two-goal effort comes just days before Son is scheduled to join the national team for South Korea's final two World Cup qualifying matches. The Taeguk Warriors will host Iran on Thursday in Seoul and then face the United Arab Emirates in Dubai on March 29.

Son said he was pleased to enter the international break on consecutive victories, adding he didn't want to take his 15-hour trip back to South Korea "with heavy shoulders."

South Korea have already booked a spot in this year's World Cup and are now trying to overtake Iran for first place in Group A of the final Asian qualification round. (Yonhap)