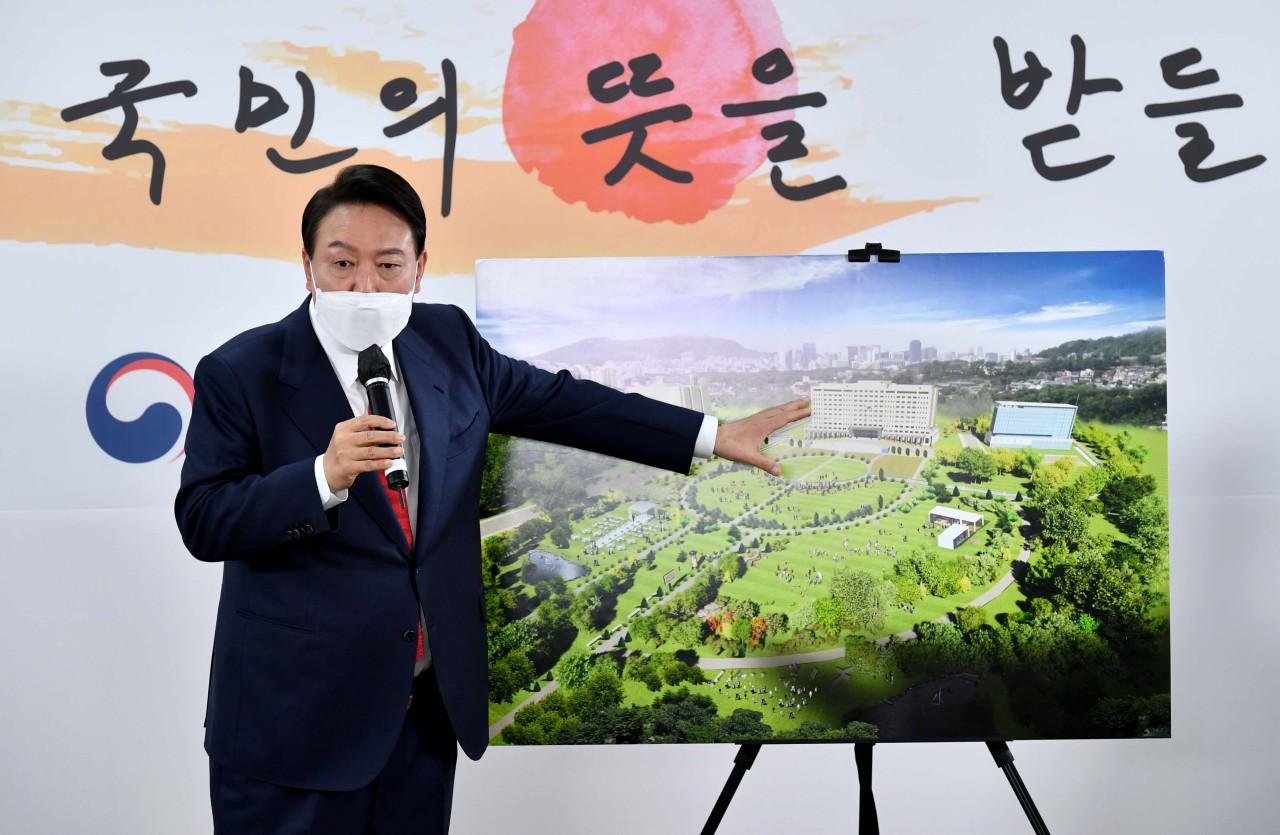 President-elect Yoon Suk-yeol gives a press conference on the relocation of Cheong Wa Dae at his transition team’s headquarters in Jongno-gu, central Seoul, on Sunday. (Yonhap)
President-elect Yoon Suk-yeol on Sunday confirmed the relocation of the presidential office to the Defense Ministry compound in Yongsan-gu, central Seoul, vowing to put an end to the "imperial" presidency.

In a press briefing held at the transition team’s office, Yoon said his team has decided to relocate the presidential office from the current Cheong Wa Dae compound in Jongno-gu, central Seoul, to fulfill his promise of returning the area to the general public and communicating more with the people.

Yoon said he would start his five-year term at the new presidential office in Yongsan-gu immediately after his inauguration on May 10. The Cheong Wa Dae area will be fully open to the public on the same day, he added.

"I do understand the concerns that I might be rushing to move the presidential office too hastily with just 50 days left before starting the term, but I determined that it would be much more difficult to move away from the symbol of imperial power, Cheong Wa Dae, after moving into the compound," he said.

"We believe it is right to quickly decide and move forward with the plan to move to the Defense Ministry compound in Yongsan, if we consider the discomfort the people may face and the fact that we are giving back Cheong Wa Dae to the people."

Yoon pledged on multiple occasions during the campaign that his administration would move the presidential office from the current Cheong Wa Dae compound to elsewhere to return the area to the people.

His pledge came as a response to many critics' view of Cheong Wa Dae as a symbol of an emperor-like presidency and as a place that blocks communication between the president and the general public due to its secluded location.

Yoon and key members of his presidential transition committee visited the Defense Ministry compound and the Ministry of Foreign Affairs building on Friday to determine where the new presidential office will be for the next five years under Yoon's term.

The team decided the Yongsan-gu area was the best site for relocation, as other areas would require extensive modifications and financial investment to ensure the presidential office is provided with enough security and administrative efficiency while causing no inconveniences to the public.

The new presidential office will also be close to the US Forces Korea’s former Yongsan base area, which is scheduled to be transformed into a public park after the site is fully returned to the Korean government.

Some of the area is scheduled to be open to the public in June, a month after Yoon takes office.

Yoon will move his presidential residence from Cheong Wa Dae to the official residence of the Army Chief of Staff in Hannam-dong, also located in Yongsan-gu. Officials said the commute would be around five minutes for Yoon to travel from the residence to the new presidential office.

The Defense Ministry will move its operation to the Joint Chiefs of Staff headquarters, which will be moving to the Capital Defense Command in Gwanak-gu, southern Seoul.

"The (Defense Ministry compound) is equipped with national security command facilities, which allows us to fully return the Cheong Wa Dae to the people and cause almost no inconvenience to them when running security services," Yoon said.

"The Yongsan area has already undergone development on the basis of protecting military facilities, so there will be no additional regulations imposed even if the presidential office is relocated."

Yoon is certainly not the first to attempt to relocate the presidential office, and the idea itself has been in discussion for years.

President Moon Jae-in had also vowed to move the presidential office before taking office in 2017, but withdrew the plan over logistical and security concerns. He eventually gave up the plan a year and a half later after failing to find an adequate space for affiliated facilities.

Yoon's relocation plan has faced criticism, with many questioning if the plan is feasible in terms of security, expense and efficiency.

The liberal Democratic Party of Korea has denounced Yoon and his transition team for being "hasty and impellent," and raised concerns about potentially causing a national security threat. It also accused Yoon of lacking communication with the public in making the decision.

"Is it right to forcibly decide on this nationally important issue without reaching any consensus with the people?" questioned Rep. Koh Yong-jin, a senior spokesperson for the Democratic Party, in a statement Sunday.

"President-elect Yoon said he will give up imperial power, but I want to ask back if this isn’t in fact a form of using imperial power."

Legislators with the Democratic Party also accused the plan of being overly expensive, estimating the relocation to cost as much as 1 trillion won ($825 million). But Yoon defended his idea during the Sunday briefing, saying the plan is calculated to cost 49.6 billion won.

Yoon and the presidential transition team are planning to submit a request for the relocation budget to the Ministry of Economy and Finance. The budget has to be approved by the incumbent president during a cabinet meeting.