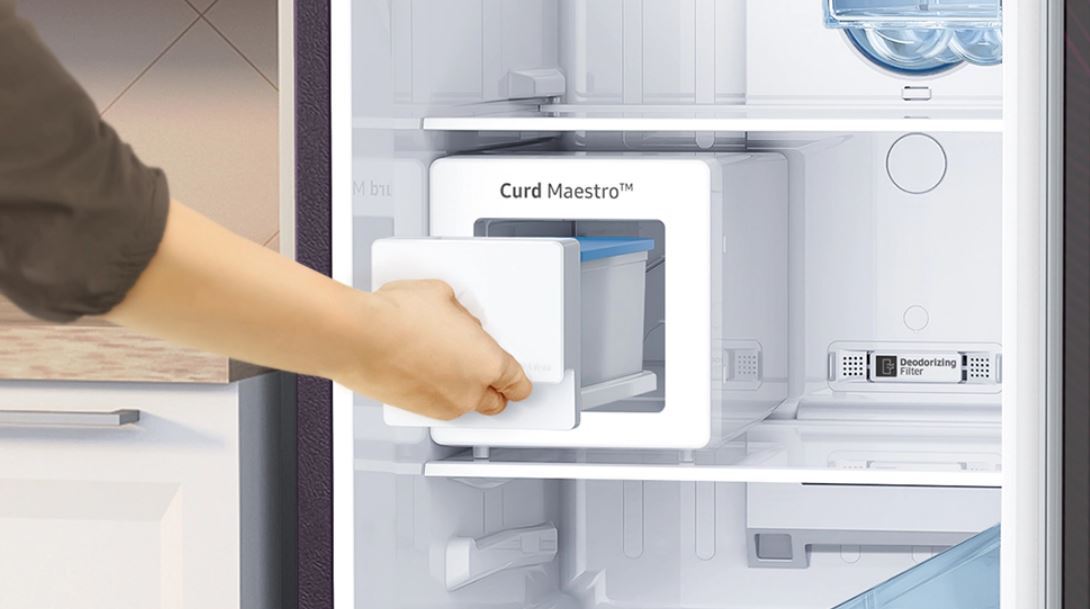 An image of Samsung Electronics' Curd Maestro refrigerator, one of the products manufactured in India's Tamil Nadu plant. (Samsung Electronics)
Samsung Electronics’ latest announcement to invest 15.88 billion rupees ($207.8 million) to set up a new refrigerator parts plant in India will not affect its household appliance factory operation in Jiangsu province, China, according to the consumer electronic goods company Wednesday.

Samsung’s plan in conjunction with the provincial government of Tamil Nadu for the plant comes after former chief minister of Tamil Nadu, Edappadi Palaniswami, in 2020 called on global tech giants including Samsung to relocate their facilities to the South Indian state in exchange for incentive packages.

But Samsung’s expansion plan in the suburbs of Chennai in eastern India did not mean it would be downsizing its operations in China, the company said.

Samsung on Tuesday signed a memorandum of understanding with the Tamil Nadu government over a new production line that has an annual capacity of at least 8 million compressor units. A compressor controls the flow of refrigerants in refrigerators.

The new facility for the refrigerator parts will stand on a 90,000-square-meter plot in Sriperumbudur, near Tamil Nadu’s capital city of Chennai. Refrigerators made with compressors there are shipped across India and abroad.

This will be an addition to the existing facility in Sriperumbudur operational since 2007, which manufactures refrigerators, TVs, washing machines and air conditioners.

“This new investment is yet another step by Samsung towards strengthening the manufacturing ecosystem in the state,” noted Muthuvel Karunanidhi Stalin, the chief minister of Tamil Nadu.

Samsung has remained the second-largest refrigerator vendor in the Indian market by revenue, followed by its domestic white goods rival LG Electronics, according to the respective disclosures. The two companies have taken up nearly 60 percent of the total market share in India.