When President Moon Jae-in took office in 2017 following the impeachment of his predecessor Park Geun-hye, many, including myself, thought the liberal Democratic Party of Korea would dominate politics for at least a full decade.

Some even expected the party to rule for the next 20 years, and the general consensus was that it would be extremely difficult for the conservative bloc to make a quick comeback. But just five years later, the conservatives are about to take back power.

As a reporter who covered the Democratic Party and its presidential election campaign, I feel a dark age is looming for the ruling party. The liberal party was reckless to assume its opposition had suffered irrecoverable damage from Park's impeachment.

With the complacent belief that its continued rule was assured, the Democratic Party failed to tend to the people's needs, especially in real estate. Moon and his aides repeatedly said they could be trusted to provide high-quality housing at affordable prices, but we all know too well what happened next.

The ruling party came to power vowing to tackle the injustices and corruption done during the Park administration, and voters gave their support to Moon in search for justice and impartiality.

But during the past five years, the Moon administration strained to protect its own, like former Justice Minister Cho Kuk and Rep. Yoon Mi-hyang when they faced charges of corruption, giving off more than a hint of double standards.

In addition, the liberal party's drive for sweeping reform across society, declared at the start of Moon Jae-in administration, has had limited success.

Most of the leaders remained the same throughout the five years, and in most cases only a select few were there to speak at press conferences. While the party recruited fresh talent to stand for legislative seats, these new recruits were certainly not in the spotlight at important times. 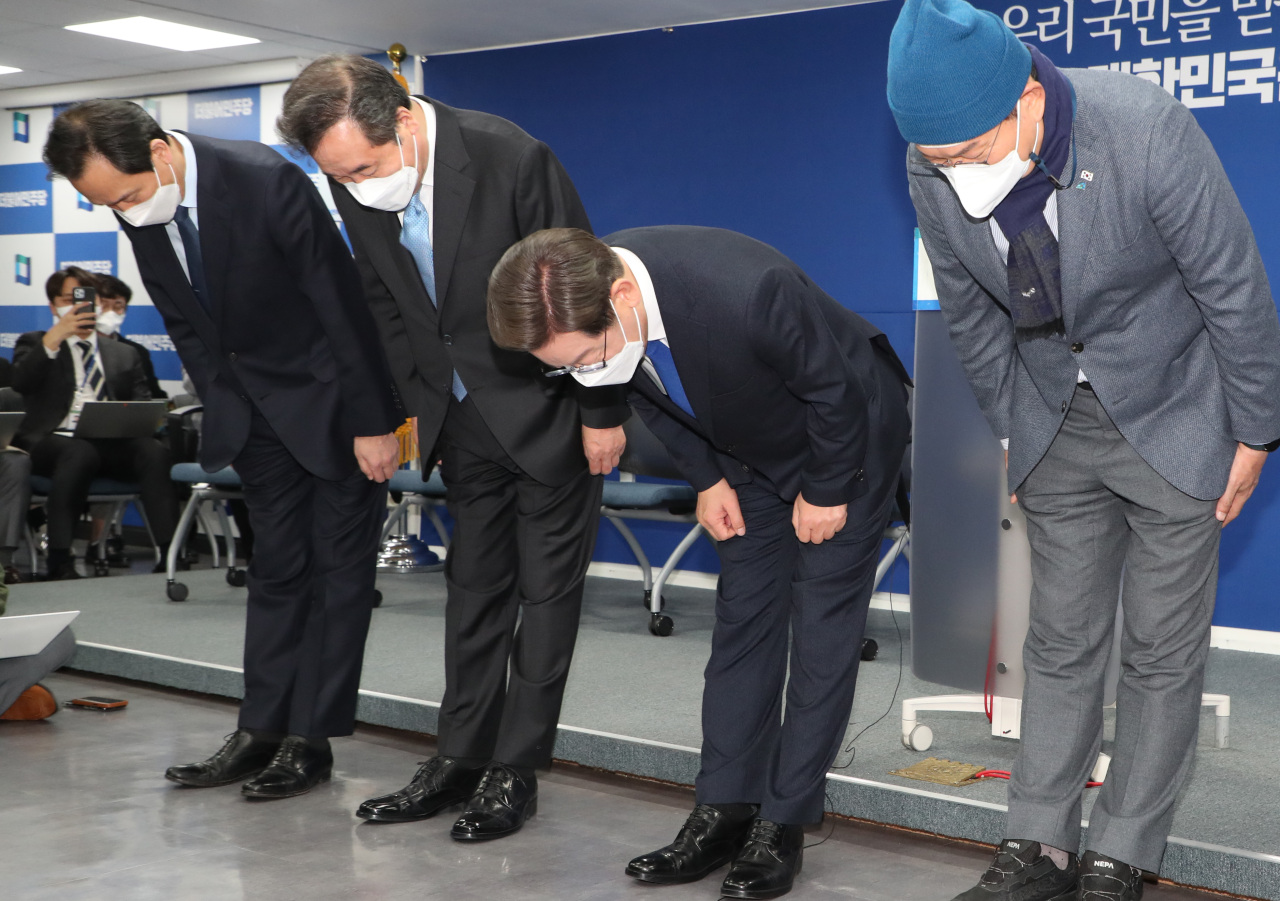 Former Gyeonggi Province Gov. Lee Jae-myung (second from right) and key officials of his presidential election campaign committee with the Democratic Party of Korea bow to apologize for the election loss during a campaign team disbanding event held at the party headquarters in Yeouido, western Seoul, on Thursday. (Joint Press Corps)
The party leadership also failed to nurture new political figures with high potential. It is yet to produce a bright star with a sharp political mind and strong charisma, or anyone able to counter the Lee Jun-seok effect.

Meanwhile, the conservative party, despite starting weak, has made steady progress toward a power transition. Most of its current leadership we see today were far from the spotlight in 2017, and most of its leading lights from that time are effectively out of the picture -- at least for the time being.

The conservative party, however, still carries a risk of reverting to its old ways, with figures from the Lee Myung-bak administration being recruited in numbers for the presidential transition committee.

It faces two more important elections before it tries again for the presidency in 2027, and what the party needs now is a united leadership with a firm commitment to stop the rot, trim the fat, and perhaps even give up some of the power it already has to impress voters.

Democratic Party leaders need to let voters know they regret the mistakes made after Park's impeachment, and they shouldn't expect easy forgiveness. Today's voters are willing to choose beyond ideologies and party allegiance, as seen by how many of the voters who brought Moon to presidency voted for President-elect Yoon Suk-yeol five years later.

Yet the signs are worrying, judging by the so-called "reforms" the Democratic Party brought following the election. The party is seeing an extreme divide over who should be taking the wheel ahead of local elections in June, after appointing 26-year-old Park Ji-hyun as the co-chair of the emergency steering committee.

The Democratic Party believes Park's appointment will demonstrate the party's commitment to women in their 20s and 30s, and boost the party’s image as a force for gender equality.

But I have already heard from many party members that they are dissatisfied to see a political novice with no backing credentials assuming the leadership. It only shows how short-sighted the party has become ahead of the next election, they say.

With party members so divided, and as a power struggle continues between supporters of Lee Jae-myung and others, the Democratic Party is unlikely in the near term to develop into united force that leads the public, as it did during candlelight demonstrations years back.

A democratic society only effectively runs with proper checks and balances, and the Democratic Party would have to prove its ability to run checks on the Yoon administration's moves and work to bring reforms where they are needed if they want to successfully bid for the presidency in the next election.