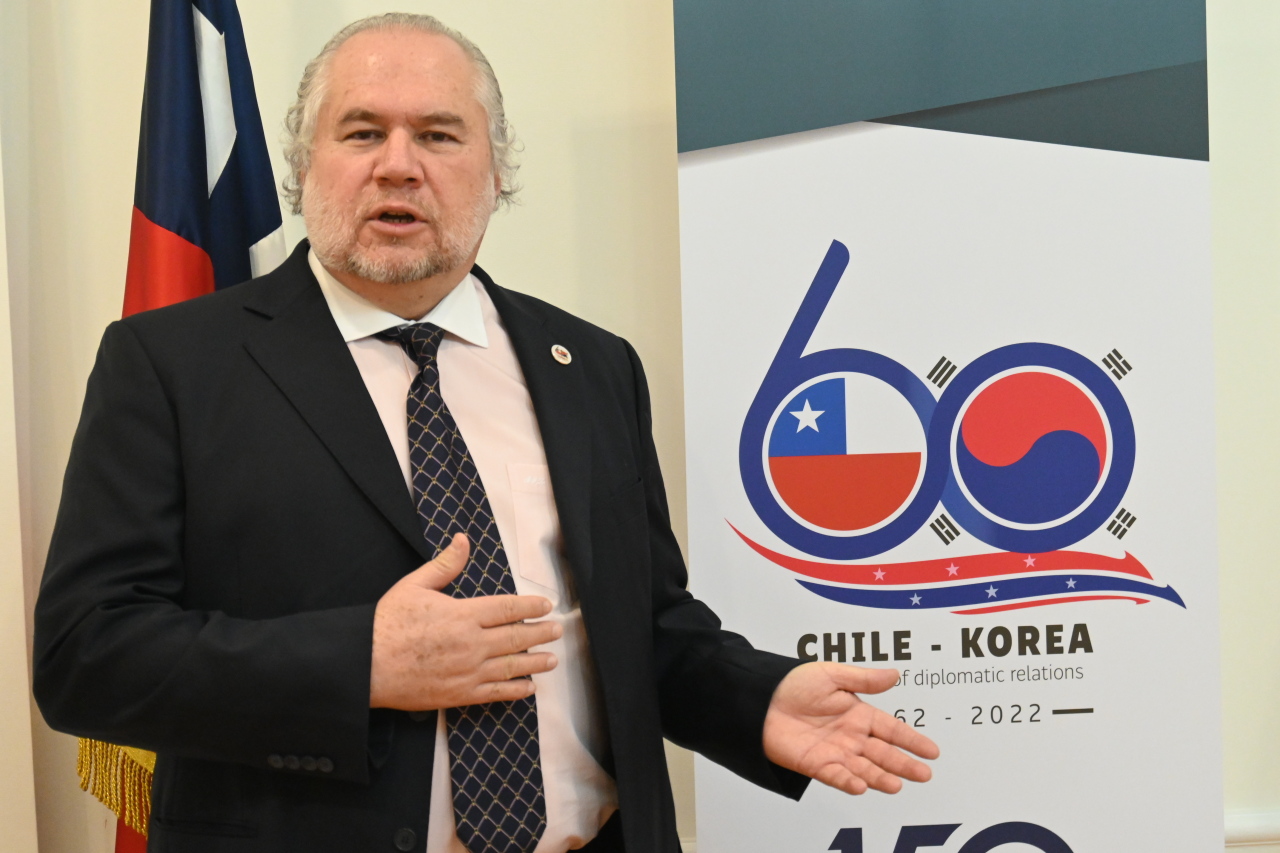 Discussing the significance of the 60th anniversary of the establishment of diplomatic relations between Korea and 13 Latin American countries, Gonzalez said that Korea and Chile have comprehensive trade relations as well as high coincidence in areas such as clean energy, protection of the environment, human rights, respect for international agreements and the search for peaceful settlement of disputes.

According to Gonzalez, the search for peaceful settlement of disputes acquires greater relevance today seeing the terrible events in Ukraine.

Gonzales stressed that amid supply chain disruptions caused by COVID-19 and Ukraine war Chile and Korea have complementary potential to cooperate for new international needs, he said.

Chile and Korea can identify emerging and permanent areas such as renewable energies and green hydrogen in the promotion of new international startups as citizens-focused alternatives to reactivate the economy in the post-pandemic era.

Introducing Chilean government policy on promoting science and technology to strengthen bilateral relations, he cited the memorandum of understanding between South Korea’s Ministry of Trade, Industry and Energy and Chile’s Ministry of Energy in November 2021, when Energy Minister Juan Carlos Jobet visited 20 companies as a milestone of continued cooperation.

According to Gonzales, Korean companies can play a bigger role as investors in solar and wind energy projects, joint ventures with Chilean counterparts and partnerships in green hydrogen, adding that Chile offers investment opportunities in infrastructure, energy, mining, agricultural technology and the digital economy. 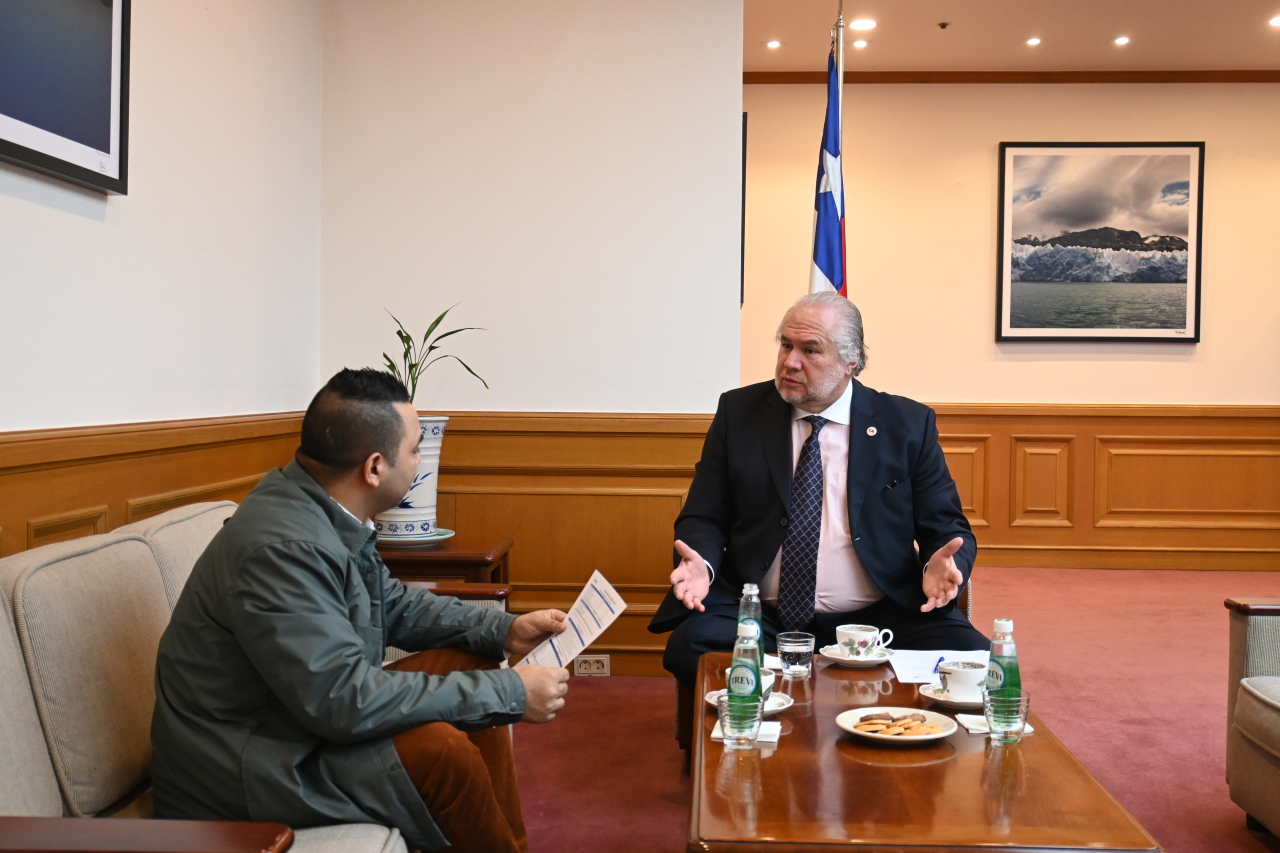 Chile charges d`affaires ad interim in Korea, Gustavo Gonzalez discusses bilateral relations during a recent interview with The Korea Herald. (Chilean Embassy in Seoul)
Korea is Chile’s fifth-largest trading partner and its private sector seeks to expand and deepen trade in goods and services as well as investments, said Gonzales, pointing to the significant role of the Chile-Korea Business Committee and Korean Chamber of Commerce and Industry.

Regarding events marking Latin American nations’ diplomatic relations with Korea, Gonzalez said that concerned countries are working together to strengthen ties on all levels.

“Presenting Latin American culture to the Korean society is the goal of the joint work that we are developing,” said Gonzales, adding that 13 Latin American embassies will cooperate to promote Latin American countries’ culture and their relations with Korea.

Gonzales said the Chile Embassy’s activities on the sidelines of the joint celebration of the 60th anniversaries of 13 embassies from Latin America focus on academia, culture and promotion of Chile in Korea. Included are a seminar on green hydrogen, an academic activity related to the Chile and Korea economies’ histories with the Global Knowledge Exchange and Development Center, an exhibition at the Korea National Library for children and young adults, various promotion activities of Chilean products like wine, pork, fruit, vegetables and salmon and promotion of Chilean air and naval industry fairs. 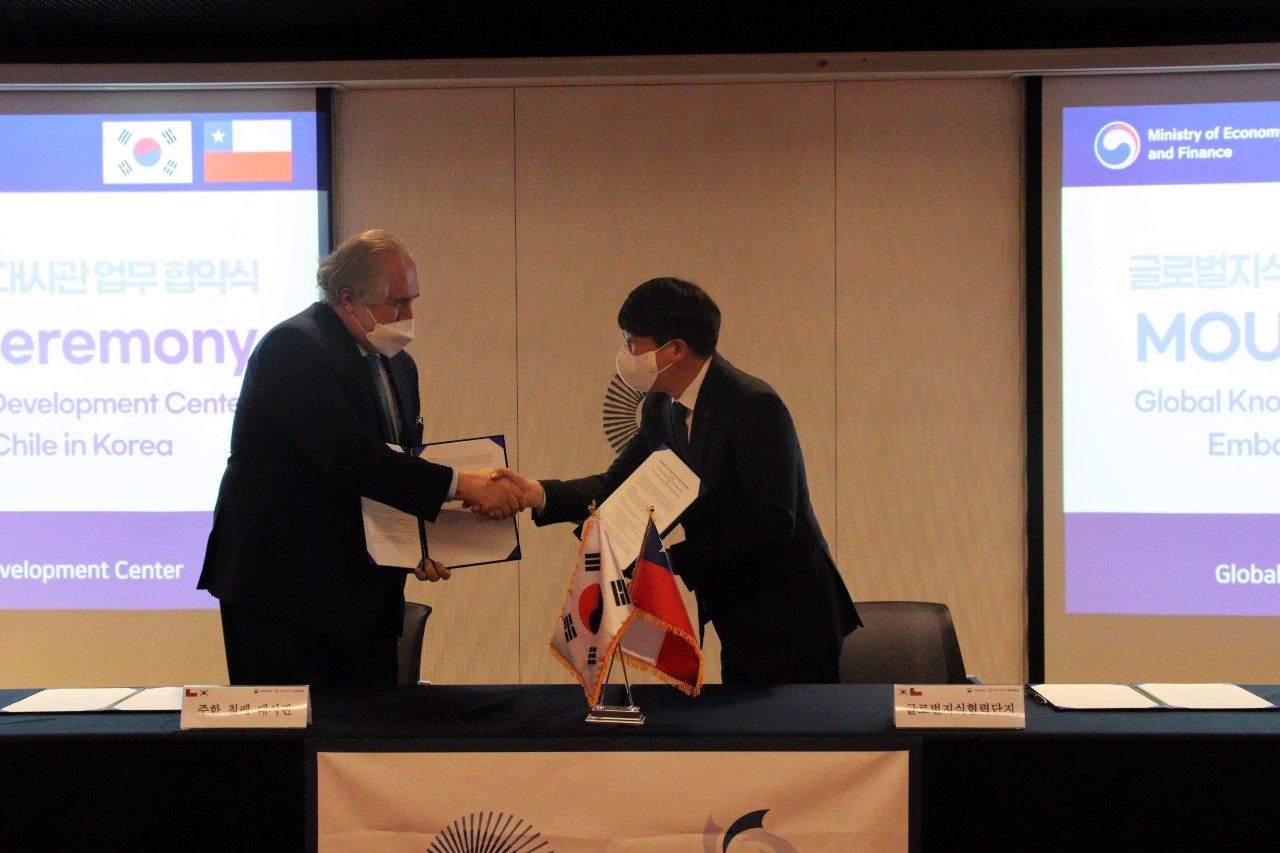 The Chilean Embassy in Seoul and Global Knowledge Exchange and Development Center sign a memorandum of understanding on educational and knowledge cooperation on March 4 to boost bilateral relationship in areas such as green hydrogen, electromobility and renewable energies.(Chilean Embassy in Seoul)
Gonzales also expressed the hope to enhance Chile-Korea cooperation in advanced human resources training at the top of the future agenda.

He said that the Chilean Embassy signed a memorandum of understanding with the GKEDC on educational promotion and knowledge cooperation to boost the Chile-Korea relationship, promote mutual understanding and exchange experiences of national development as well as economic and industrial policies in the two countries.

“If we consider long-term issues, the Antarctic cooperation has been a convergent area for Chile and Korea,” said Gonzales, highlighting the location of Chile as of huge relevance for Korean researchers.

According to Gonzales, the Korea Polar Research Institute of Marine Research Placement and the Chilean Antarctic Institute have closely worked together by conducting regular meetings, joint research and collaboration in expeditions.

He said that Korea appointed an officer to Punta Arenas, the most southern big city in the Americas, to explore urban settlement, and added that Chile’s promotion as a gateway to the white continent will facilitate global Antarctic studies and expeditions.

He recommended the Atacama Desert in northern Chile and the Torres del Paine National Park as beautiful scenery for Korean visitors. “Koreans like to hike, as it can be seen in all the Korean territory, the southern regions of Chile will be of their best interest,” suggested Gonzales.

This interview is part of The Korea Herald’s series commemorating the 60th anniversary of the establishment of diplomatic relations between Korea and 13 Latin American countries with embassies in Seoul. -- Ed