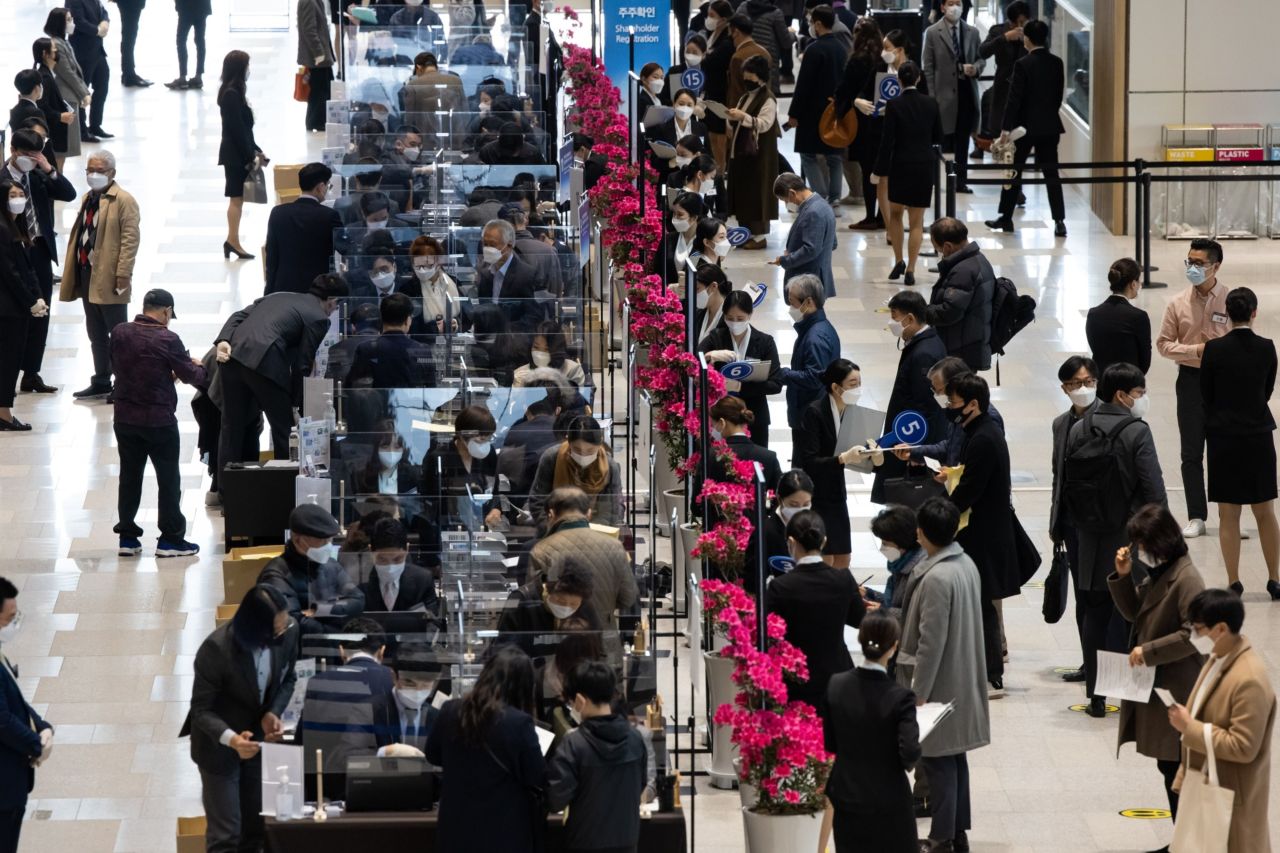 Samsung Electronics shareholders arrive at the Suwon Convention Center in Gyeonggi Province to attend an annual general meeting in this file photo dated March 17, 2021. (Bloomberg)
Samsung Electronics will hold an annual meeting of shareholders on Wednesday, amid complaints growing over performance issues of its latest Galaxy phones and falling stock prices that failed to reflect the world’s top smartphone and chip maker’s robust earnings.

The key agenda of the upcoming meeting is the appointment of four presidents, including Kyung Kye-hyun, co-CEO and head of chip business, and Roh Tae-moon, head of mobile business, as new internal board members.

Industry watchers say the proposal is highly likely to get approved with a majority vote, but keen attention is being paid to the approval rate as the National Pension Service, one of the key investors, is hinting at voting against the board nominees.

On Sunday, the NPS said it would veto Kyung, the former CEO of Samsung Electro-Mechanics, and Park Hak-kyu, president of management support, from joining Samsung’s boardroom.

The pension fund cited Kyung and Park’s history of “undermining corporate values and shareholders’ rights” for the reason behind this move, without further elaborating.

The NPS also said it would vote against two nominees for outside board seats – Kim Han-jo, chairman of Hana Financial Foundation, and Kim Jong-hoon, CEO of Kiswe, a video tech startup – citing their negligence over activities hurting shareholders’ rights.

The proxy battle would not be severe, considering the NPS’s 8.53 percent voting rights, which compares to 21.15 percent stakes in favor of the management, including 8.75 percent owned by Samsung Life Insurance, the largest shareholder.

“The NPS’ veto may have a limited impact in the vote result, but could affect shareholder sentiments overall, piling pressure on Samsung’s top brass,” Oh Il-sun, director of chaebol tracker Korea CXO Institute.

“At a time when Samsung faces both internal and external risks, shareholders are likely to call on the leadership to come up with countermeasures.”

Some minority shareholders are also joining forces to vote against Roh, the mobile chief, for his mishandling of the latest scandal surrounding the game optimizing service software installed in Samsung’s latest flagship Galaxy S22 phones, threatening to file a class lawsuit.

But controversy grew after it was found that the software is switched on for other popular resources-heavy apps, limiting the phone’s overall performance at only 53.9 percent of its promised performance, according to Geekbench, a global platform that measures and compares smartphone performance.

Samsung recently announced a software update to fix the problem, while the nation’s antitrust watchdog has launched an investigation to see if there was any violation of advertisement law in Samsung’s promotional activities.

During the annual meeting, which is both an in-person and online event, shareholders are also expected to demand answers to tricky questions such as Samsung’s pursuit of business in Russia as well as the GOS scandal.

Samsung, which recently suspended shipments to Russia, remains mum over its exit plans amid calls to act against the country’s invasion of Ukraine.

Samsung’s revenue from Russia stands at about 4 trillion won ($3.2 billion), less than 2 percent of its total revenue globally. But the region is one of the company’s strategically important markets, where Samsung’s Galaxy phones take up 34 percent of smartphone sales.

Faced with internal and external pressures, Samsung’s stock price is currently suffering losses, hovering at some 70,000 won. Compared to a year ago when the price hit a record high of 91,000 won, the stock has lost almost 30 percent of its value now.