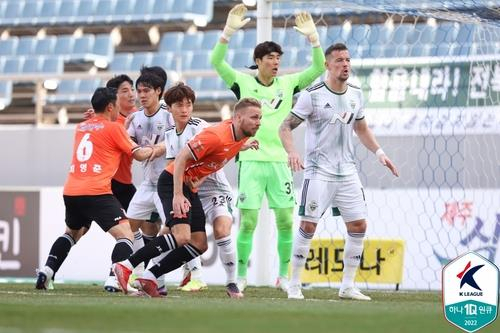 Five matches into a season in which they are chasing a record sixth consecutive championship, K League 1 giants Jeonbuk Hyundai Motors find themselves in a largely unfamiliar spot.

Jeonbuk suffered their third straight loss at the hands of Jeju United on Saturday. The 2-0 defeat temporarily dropped Jeonbuk to 10th place among 12 clubs on the tables. Then Suwon FC earned their first win of the season Sunday to move up to 10th place and pull Jeonbuk down to 11th place.

Jeonbuk have four points from one win, one draw and three losses this season. In 2021, they didn't suffer their third loss until their 16th match.

Granted, there is still a lot of football left to play this year -- 33 more matches, to be exact -- but being nine points out of first place at any point in a season isn't something Jeonbuk are accustomed to.

Jeonbuk have been held scoreless during their current three-game slide. During their current run of five straight championships, from 2017 to 2021, Jeonbuk only had one other skid as long as this one -- a three-match losing streak in May 2021.

They entered Saturday's match in desperate search of a goal and a win, and came up with neither.

Jeonbuk led the K League 1 with 71 goals last season but have managed just two goals so far this season. Gustavo and Stanislav Iljutcenko, who tied for the club lead with 15 goals apiece in 2021, have not yet found the back of the net in 2022.

Jeonbuk head coach Kim Sang-sik said his players were thoroughly outplayed by Jeju and there is only one way out of the funk.

"We have to keep practicing," Kim said. "Our players have to find their form as soon as possible and start playing to their full capabilities."

While Jeonbuk's early woes continued, Ulsan Hyundai FC, runners-up to Jeonbuk in each of the past three seasons, stayed in first place after beating FC Seoul 2-1 on Friday. With 13 points on four wins and a draw, they remain the only undefeated club this season.

Pohang Steelers are three points back of Ulsan after a 1-1 draw with Suwon Samsung Bluewings on Saturday took them to 10 points. Incheon United, one of the season's early surprises, also have 10 points following their 1-0 victory over Gimcheon Sangmu FC on Sunday.

With Suwon FC having notched their first victory, Seongnam FC are now the only winless team this season. They lost to Daegu FC 3-1 on Friday, and they now have two draws and three losses for the season. They have conceded a league-worst nine goals so far. (Yonhap)