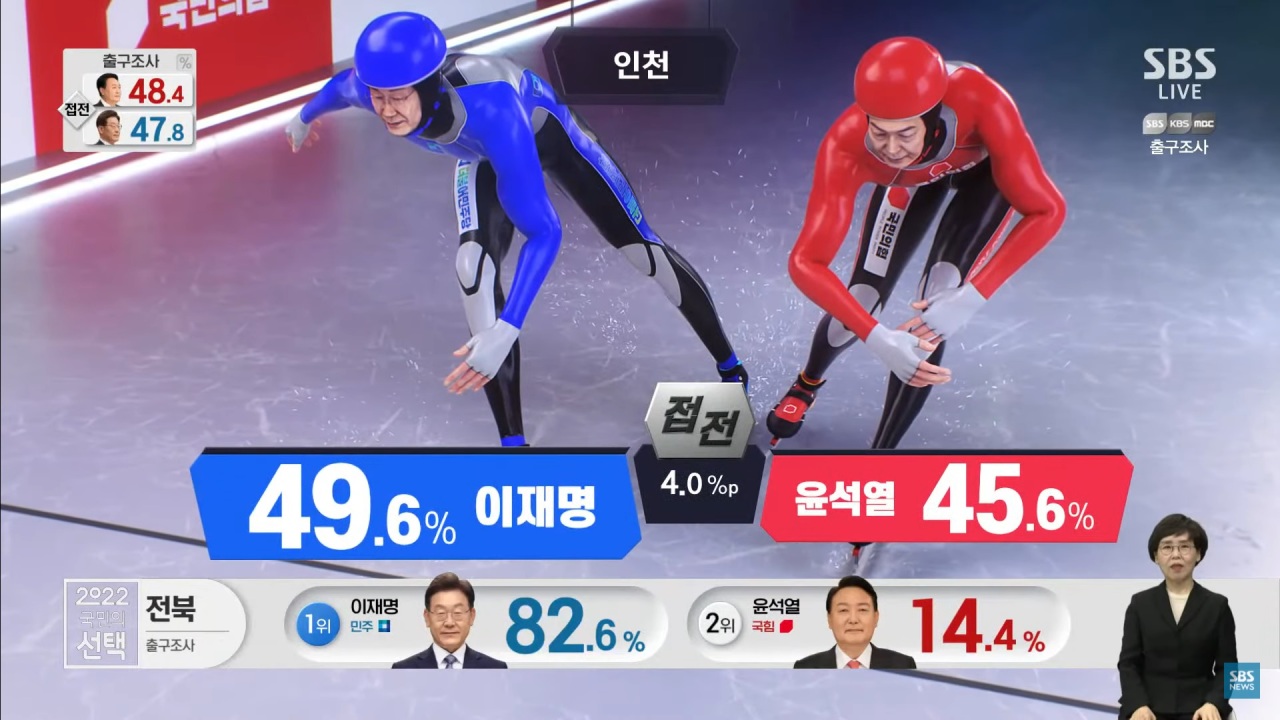 Claiming that the first metaverse ballot count and the broadcaster‘s own artificial intelligence prediction program was a hit with viewers, the channel said, “KBS was the first broadcaster to predict the election in three different stages -- ‘leading,’ ‘certain’ and ‘confirmed.’”

Terrestrial broadcaster SBS was more about style than substance, relying on fancy visuals, which may explain the low ratings. 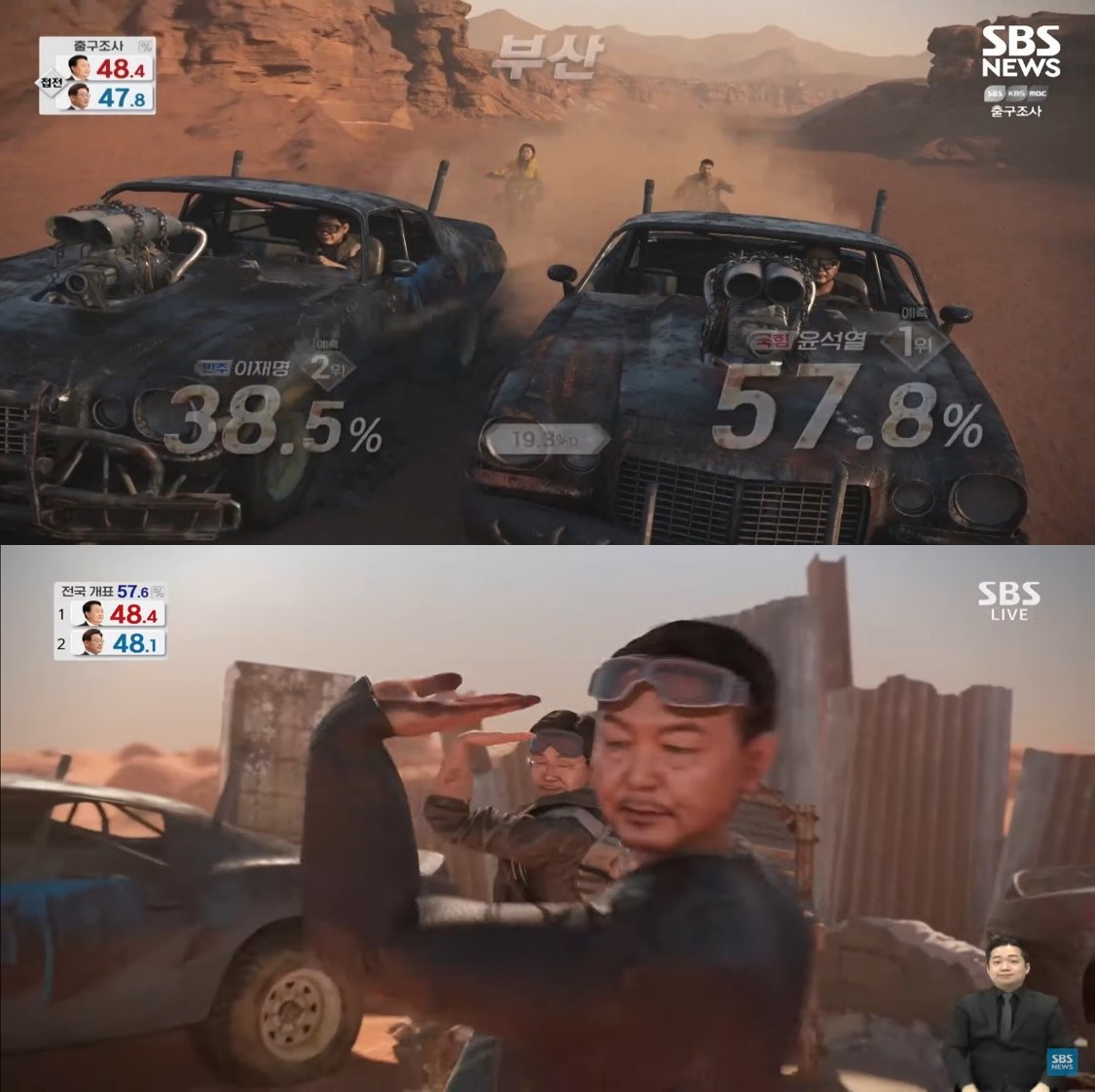 “Mad Max” and K-pop girl group aespa’s “Next Level” parodies are shown on SBS’ “2022 People’s Choice” (SBS)
Dai Watanabe, a 32-year-old shop owner from Daegu, said the show reminded him of the Tokyo Olympics opening ceremony, such as the pictogram performance.

“I thought the unexpected ‘Mad Max’ parody was both entertaining and creative, helping the viewers stay tuned to the long election coverage. I wasn’t able to stay awake until the end, I am certain that the show made many people laugh,” Watanabe told The Korea Herald on Thursday.

A 26-year-old exchange student named Claire in Busan said the SBS show was entertaining enough that she watched the entire election broadcast.

“I watched SBS’ previous presidential election coverage featuring ‘Game of Thrones’ on YouTube. That was the reason I tuned into SBS yesterday. I never expected to see the candidates dance to aespa’s ‘Next Level,’” Claire said.

“I also liked how the candidates were using sign language as the exit poll results were announced,” she added.

Though many might have enjoyed the flashy presentation, some were concerned about the substance of SBS’ election coverage.

“The show was visually pleasing, but the level of discussion and analysis was lacking compared to KBS,” a commenter said on the SBS election coverage YouTube video. 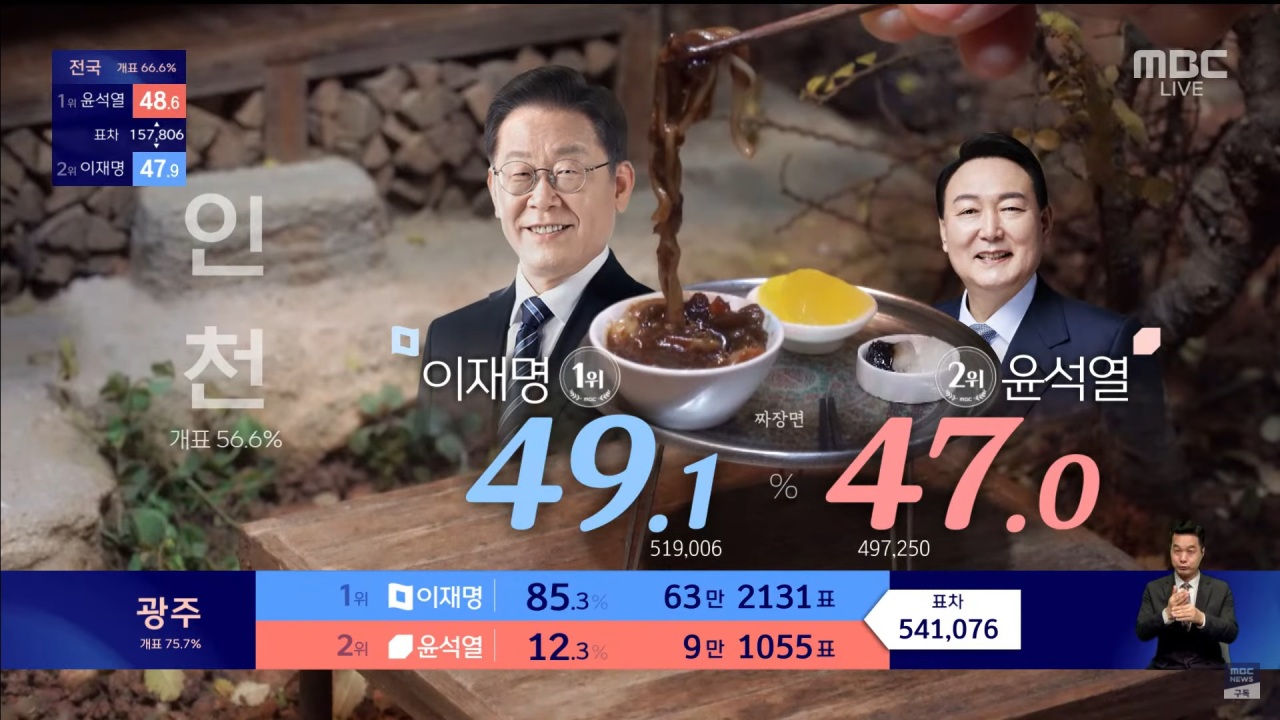 Miniature versions of jajangmyeon, or noodles in black bean sauce, are presented during MBC’s “Choice 2022” (MBC)
Meanwhile, local broadcaster MBC introduced a dose of culture into its coverage, showcasing 3D models of Korean landmarks, traditional works of art, Pinkfong’s “Baby Shark” animation and miniature versions of representative foods from each of the Korean provinces and metropolitan cities. 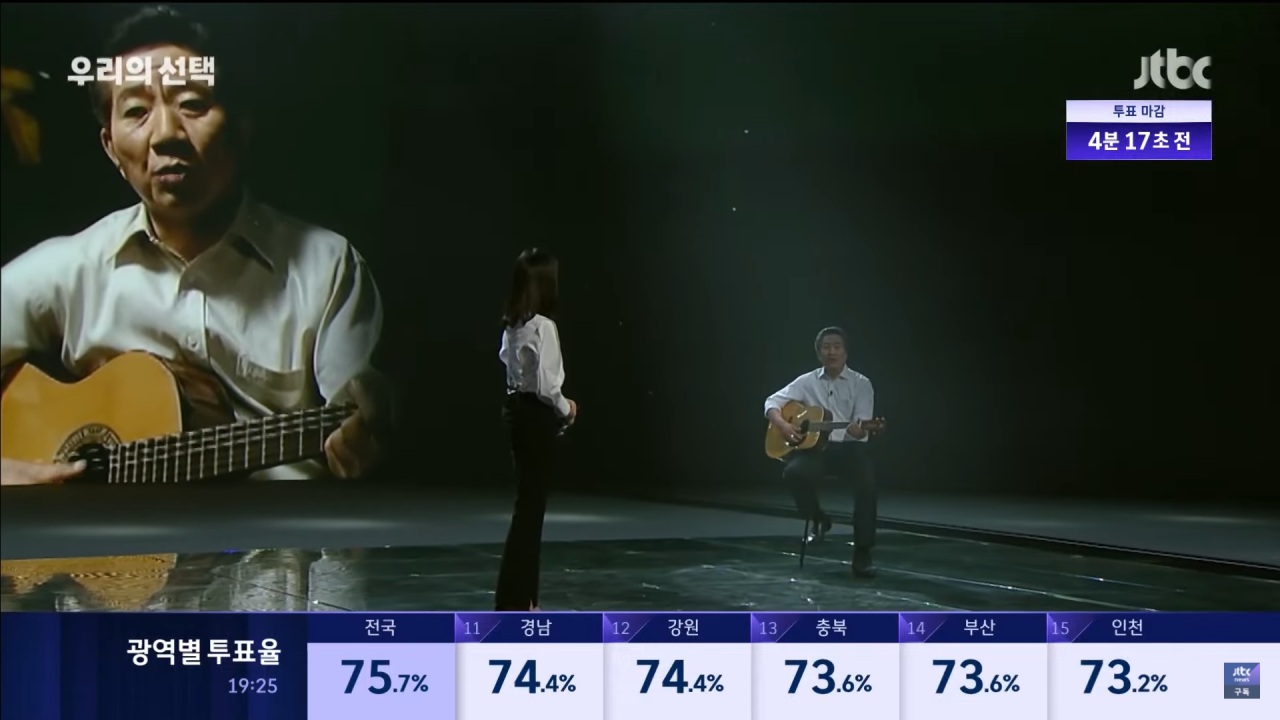 A screenshot of JTBC’s ballot count program shows the late President Roh Moo-hyun brought back to life with artificial intelligence. (JTBC)
Cable channel JTBC broke ranks by conducting its own exit poll and integrating AI technologies to resurrect deceased former Presidents Park Chung-hee, Kim Young-sam, Kim Dae-jung and Roh Moo-hyun. However, the effort was not enough to win viewers’ hearts or eyeballs, as the show recorded a viewership rating of 3.02 percent, according to Nielsen Korea.