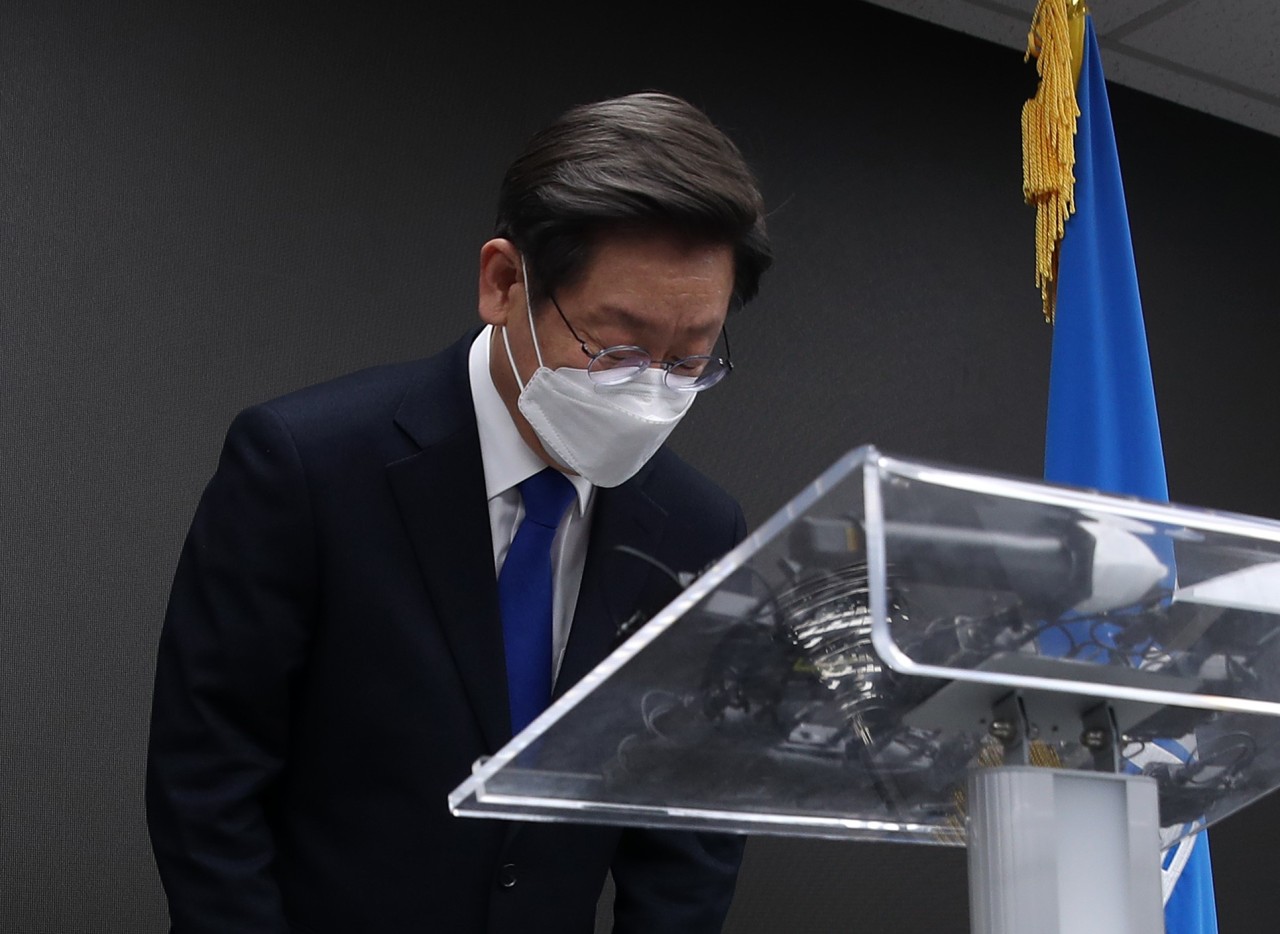 Lee Jae-myung of the liberal Democratic Party of Korea concedes defeat in the 20th presidential election at the party`s headquarters in Yeouido, western Seoul, on early Thursday morning. (Joint Press Corps)
The Democratic Party of Korea faces a perilous path ahead after the defeat of its candidate Lee Jae-myung, as possible investigations and political actions could undermine its dominant position in South Korean politics.

Lee's defeat signifies that voters have eventually chosen to prioritize holding the current administration to account, underscored by Yoon Suk-yeol of the conservative People Power Party over Lee's assertions that he would be able to bring about a national recovery.

Although Lee's supporters emphasized strong leadership and economic recovery to overcome the COVID-19 pandemic, a greater number of voters decided to back Yoon, lending their support once again for a candidate emphasizing justice and impartiality.

President Moon Jae-in remains relatively popular compared to his predecessors, but voters have been increasingly dissatisfied with his administration's performance, as they saw real estate prices skyrocket, the economy falter and allegations of corruption and injustice continue to be leveled against those in power.

South Koreans felt let down by policy failures and betrayed a continuance of leadership trends that Moon had pledged to end, such as nominations of officials with ethical black marks and their appointment despite objections from the National Assembly.

Lee will have to brace for a tough few months, as the numerous allegations brought against him in the run up to the election see almost certain to be investigated .

Lee is likely to face special counsel probes into his alleged involvement in the Daejang-dong real estate development scandal, where he is accused of unlawfully helping an asset management firm to join the project when he was mayor of Seongnam, Gyeonggi Province, in 2015.

The liberal party candidate has denied all allegations made against him and testified on multiple occasions that he was not aware of the key informants and officials involved in the case, saying his only misdeed was not carefully monitoring what was happening under his watch.

Lee and his wife, Kim Hye-kyung, also face allegations of power abuse while Lee served as the governor of Gyeonggi Province before entering the presidential race. Accusations include Lee and his wife using the provincial government’s budget to support Lee's presidential campaign and public workers assisting them in private affairs.

Prosecutorial investigations into these allegations are already underway, but with Yoon's victory, it could spell trouble for Lee and his aides.

The Democratic Party's strong position in South Korean politics is also in danger, as a blame game opens up over who is responsible for promoting Lee as a candidate.

Senior leaders of the liberal party on Thursday announced they were stepping down from their party positions, claiming reponsibility for the unsuccessful election outcome following an undisclosed internal meeting held at the National Assembly.

"I have commonly emphasized responsibilty in carrying out politics. So as the leader of the party, I seek to resign from the post in assuming responsibility for the defeat in the presidential election," Rep. Song Young-gil, head of the Democratic Party, said in a press briefing.

"Top party officials have also expressed their intent to resign."

Such troubles could seriously undermine the chances of victory for the Democratic Party in the local elections in June, as whichever party prevails in the presidential race has long been expected to succeed in the June elections as well.

"The Democratic Party, if Lee Jae-myung loses, will have to enter an emergency mode, and all of the current party leaders can be expected to resign from party leadership posts in assuming responsibility for the defeat," local political commentator Hwang Tae-soon told The Korea Herald last week.

"We will undoubtedly see new leaders come up and take control of the Democratic Party, and the new leaders will be focused 100 percent on the local elections."

Some experts have gone as far as to say that the Democratic Party could shun its allegiance to Lee if he were to lose. The party could deploy tactics to lift its burden of supporting a candidate with a troubled history and criminal background, which could help the party shoot for a rebound in the June elections.

But Lee only fell short of victory by 0.73 percentage point, with 47.83 percent of voters expressing their support for the liberal party candidate nonetheless. That means a victory in June elections might still be a reach even with a complete removal of Lee and his aides in the liberal party power dynamics.

The Democratic Party will undoubtedly focus on bringing back the large group of liberal bloc supporters who felt betrayed seeing Lee win the nomination, they say. The goal will be easier to accomplish than continuing to rally support for Lee, as his foothold in the liberal party is weak compared to close aides of Moon.

Lee even distanced himself from the Moon administration during his campaign to appeal to voters who have grown frustrated with the liberal rule. It led some to turn against him, instead supporting Lee’s rivals during the primary race.

"The game changes to a whole different level when the winner is announced, and Lee Jae-myung could be treated remarkably differently, on a negative note, if he loses the election," local political commentator Rhee Jong-hoon told The Korea Herald earlier.

"The party already lost much support from traditional supporters when choosing Lee Jae-myung to represent them in the election, and they may not risk doing the same when they face another election in just three months."

The Democratic Party could also consolidate forces to prevent Moon from serving possible jail time, experts add, as Yoon already mentioned he would launch a probe into the Moon administration if he wins the presidency.

There are speculations that Moon and his key aides will face probes on some of the controversial policies and moves they had made, after Yoon is inaugurated in May.

The liberal party controls 172 out of 300 parliamentary seats, which endows its members with enough power to continue exerting influence on national politics and possibly thwart a crackdown on Moon’s misdeeds during his presidency.

History shows that almost all past presidents of South Korea have undergone investigations after their terms, and experts have told The Korea Herald frequently that the trend will likely remain unchanged for Moon.

In shooting for a rebound, the Democratic Party could also strengthen its calls for investigations into allegations surrounding Yoon, as undermining Yoon’s image as an unbiased, justice-centered prosecutor would help sap the People Power Party's momentum heading into the local elections.