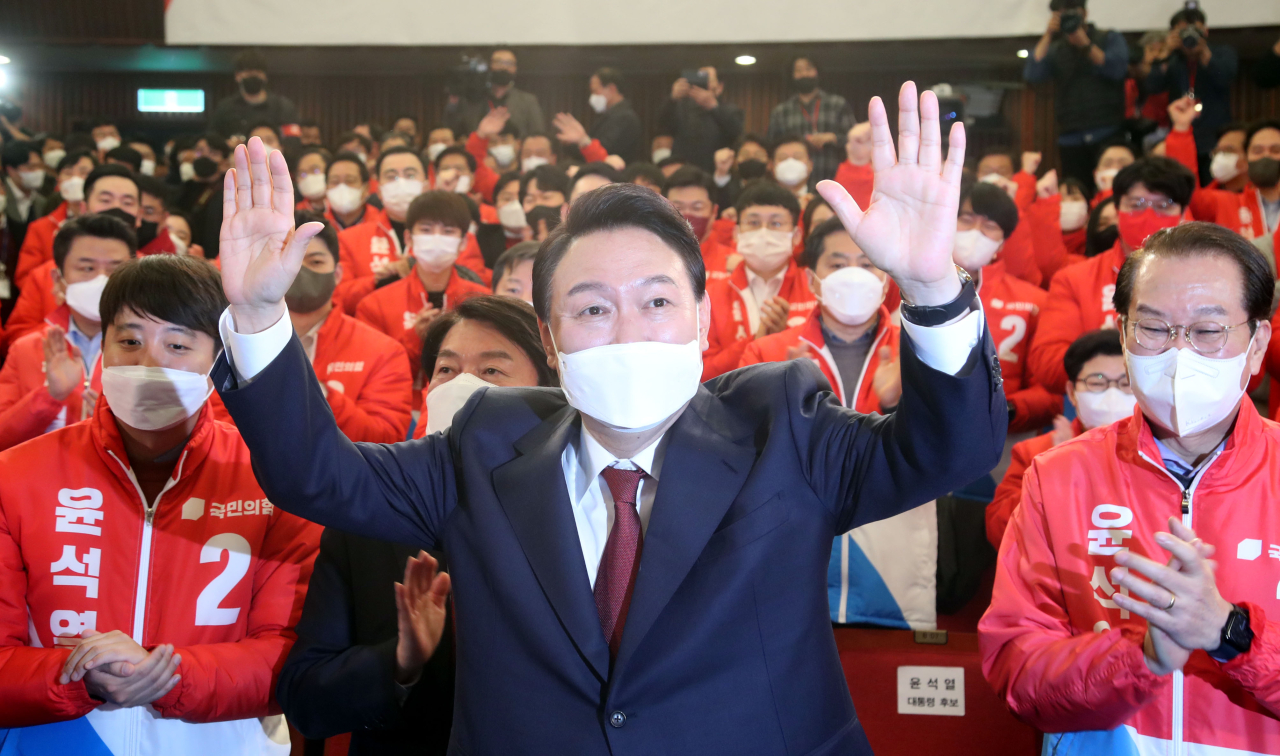 President-elect Yoon Suk-yeol holds his fists up in joy after confirming of his win in this year’s presidential election at the party’s campaign headquarter stationed at the National Assembly on Thursday. (Yonhap)
As the poll confirmed of his victory, President-elect Yoon Suk-yeol arrived at the party’s campaign headquarter to deliver his speech at an early dawn on Thursday.

Ahn Cheol-soo, the chief of the minor opposition People’s Party who dropped out of the race to merge campaign with Yoon, also came to celebrate the victory wearing a red tie to match the color of the main opposition party.

“I believe (the presidential election) was a very heated, and passionate race. In that process, I have felt and learned a lot of things,” Yoon said.

“Today‘s result is not a victory for me, our party or Ahn Cheol-soo, and his party. I think it is the victory of the people.”

Yoon also delivered a word of consolation to the competitors.

“I also would like to express my gratitude to the other nominees Lee Jae-myung of the Democratic Party and Sim Sang-jung of the Justice Party, who ran in the race with me,” Yoon said.

“Even though they were not elected, I would like to say they have made a great contribution to development of Korea’s politics.”

The president-elect who was formerly the prosecutor general said he has learned of what is needed to become a leader of a nation and how to listen to the voice of the people.

He also said he will work hard to make sure the merger of Ahn‘s People’s Party with his People Power Party is carried out quickly.

The campaign headquarter erupted in joy, and party leaders and rank-and-file members stood up from their seats to hold each others’ hands and chant, “Regime change” and “Yoon Suk-yeol” in unison.

Yoon’s wife Kim Keon-hee was not present at the scene.

Yoon is the first former prosecutor to be elected president and the first president without any political experience.