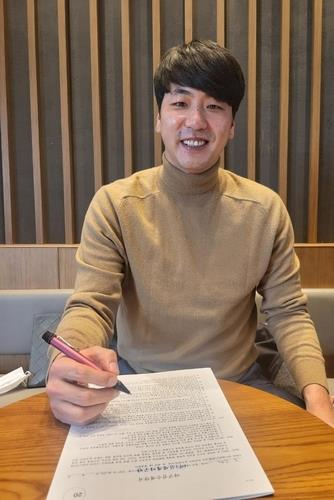 The SSG Landers of the Korea Baseball Organization (KBO) announced Tuesday they have reunited with their franchise icon on a four-year deal worth up to 15.1 billion won ($12.3 million). The 33-year-old will make 13.1 billion won in total salary over the next four seasons and can earn up to 2 billion won more in incentives.

By the total amount, it's the largest contract in KBO's 40-year history by 100 million won.

Kim pitched for the SK Wyverns, the previous incarnation of the Landers under a different ownership, from 2007 to 2019, before signing with two-year deal with the St. Louis Cardinals in December 2019. He became a free agent after the 2021 season.

The Landers' reunion with the left-hander seemed imminent Monday night, when they announced they had asked the KBO office to tender a status check on Kim through the Office of the Commissioner in Major League Baseball (MLB).

Under an agreement between the KBO and MLB, if a KBO club is interested in a player who is playing or has played in MLB, then the club must request that the KBO office go through a status check on that player by contacting its MLB counterpart. MLB teams must also take the same step, through their league office, if they are pursuing a KBO player.

Kim still had one year left on a four-year contract with the Wyverns in 2019 but the club allowed him to take his talent to St. Louis.

Kim became a free agent at an inopportune time, as MLB owners locked out players over a labor dispute in December. During the protracted work stoppage, which has wiped off the first two series of the regular season, free agents aren't allowed to sign contracts with MLB teams.

But it didn't prevent Kim from signing elsewhere. The Landers still owned rights to Kim, meaning that if Kim wanted to play in the KBO again, he had to sign with the Landers unless they waived those rights.

In a statement released by the Landers, Kim said it wasn't a difficult decision to rejoin the only KBO franchise he'd known in his pro career.

"While pitching in the majors, I got to experienced baseball at the highest level and also learned the value of connecting with fans," Kim said. "I was able to challenge myself in the majors because of support from fans here, and I decided I wanted to give back to them once I returned to the KBO. The Landers recognized my value with the biggest contract ever in the KBO, and I didn't have to think long and hard about the reunion."

The Landers said Kim, who has been working out on his own in Incheon while monitoring talks between MLB and players' union, will report to their spring training on Wednesday. Kim will don his old No. 29, which had been left vacant during his two seasons away from the KBO.

Kim's return will give the Landers three former major leaguers in the starting rotation. They had earlier retained Wilmer Font for his second season here and then signed one-time New York Yankees starter Ivan Nova.