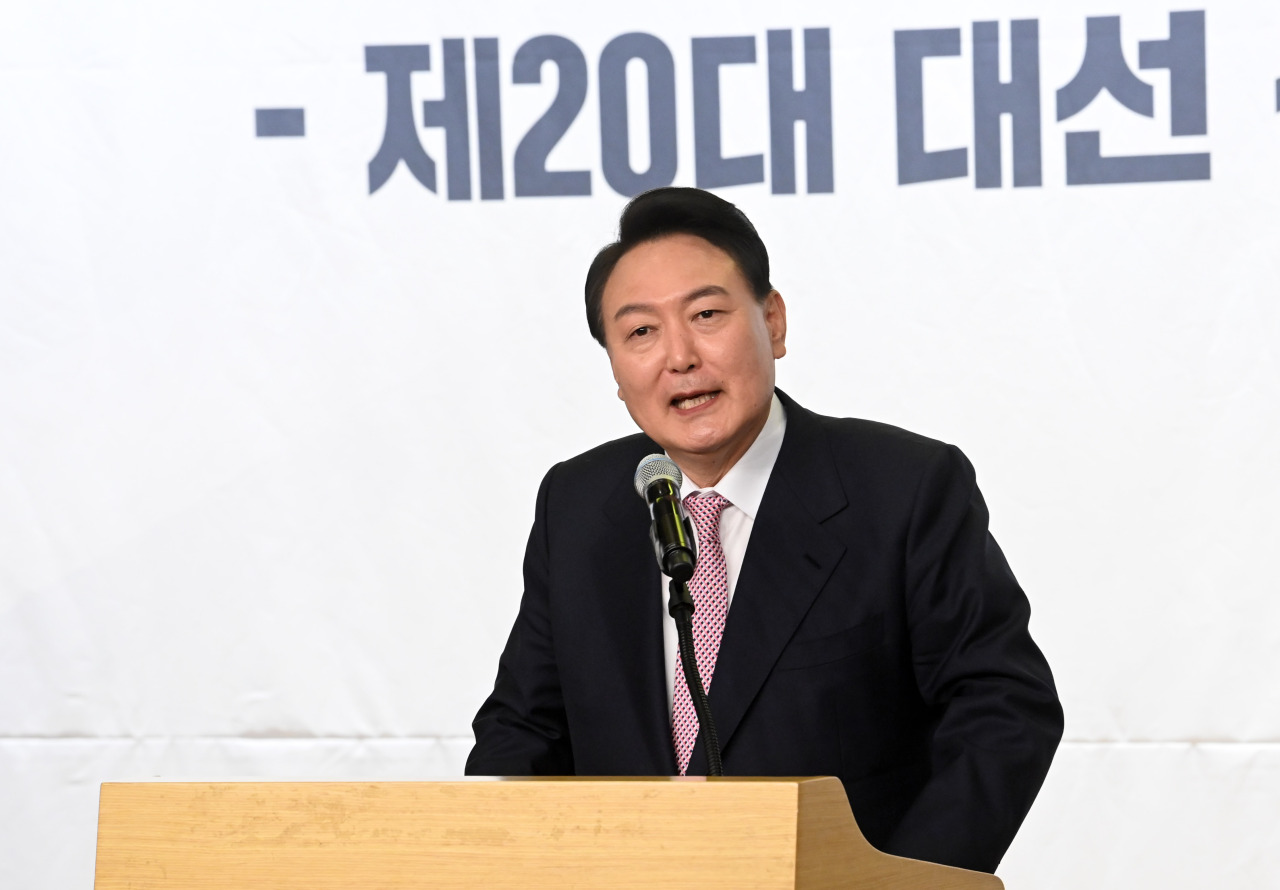 At the top of his agenda is compensating those who have sustained economic losses due to the COVID-19 pandemic. According to Yoon’s plans, "fair and complete" compensations for losses will be provided, and counseling will be offered to merchants and self-employed people affected by the pandemic.

The measures rolled out will continue for two years after the pandemic is officially declared over.

Next is creating jobs by establishing positive feedback for economic growth, welfare and job creation. As part of the plans, Yoon will seek to tie up socioeconomic policies from industry and education policies to labor and welfare policies.

To achieve the goal, Yoon plans a two-pronged approach. One part is to set up a body dedicated to regulatory reform, through which he hopes to facilitate corporate investment. He also plans to ease labor regulations to give companies and workers more freedom in areas such as setting working hours.

The second part of the plan is to increase support for companies, including tax relief and for R&D, to aid companies in growing and to focus government resources on startups in the fields of medical and cultural content companies. The plans also include creating more social service jobs, such as jobs that concern digital transition of related professions.

Yoon's plans for stabilizing the real estate market includes supplying 2.5 million new homes by 2026. The plan focuses on the private sector, with only one-fifth of the total being supplied by the state as public rental housing.

The plan also focuses on Seoul and the surrounding regions, with up to 1.5 million homes being built in Greater Seoul, of which 500,000 will be located inside the capital.

According to the pledges submitted to the National Election Commission, the Yoon administration will draw up a road map with further details, including on financing the projects, soon after its launch.

On government reform, Yoon has made two main pledges. First is to dismantle Cheong Wa Dae and drastically reform the presidential office, and to establish a "digital platform government."

As for the government, Yoon said that he will combine all government websites -- central government bodies as well as organizations under them and those of local governments -- into a single website to set up the “One Site for All Service” webpage.

In addition, the technologies of big data and artificial intelligence will be used to build a government that "predicts future social issues" and respond preemptively.

As part of the plans, Yoon pledged to strengthen government leadership in related fields, and to introduce a "date-based" method of running state affairs. Yoon's plans also include increasing state support for R&D "without interference," as part of which regulations concerning government R&D subsidies will be eased. Yoon’s administration will also seek to boost international cooperation on R&D, and to host multinational companies' R&D facilities in Korea.

The government system for managing R&D projects will also be revised to build an environment that facilitates "creative" and "adventurous" research, focusing science and technology developments on resolving national issues such as disease, air pollution, carbon neutrality and an aging population and low birthrate.

As part of the plans, Yoon pledged that the government will increase subsidies for medical checkups for women, infertility treatments for couples and for all conditions that directly concern pregnancy and childbirth. Other pledges include a 1 million won ($810) monthly subsidy for 12 months for new parents, and wider postnatal support, including coverage for postpartum depression.

For his promise of creating a fairer society, Yoon laid out three main promises. The first is to abolish the Ministry of Gender Equality and Family, which according to Yoon is "considered unfair by young people," second is providing equal opportunities and third is to "resolving unfairness across society."

Describing the Gender Ministry as producing "unfair policies that favor women," Yoon has promised to establish a new body that can shed light on the "value of 'family' and youths who strive for fair competition."

His pledge for a fairer society also includes cracking down on unfair advantages in university entrance and finding employment, as well as strengthening penalties for sex crimes and for making false accusations.

In an apparent effort to focus on areas the Moon Jae-in administration has been accused of failing in, Yoon also vows to make the finances of civic groups more transparent and crack down on illegal actions by hard-line labor unions. Yoon also plans to lower the age for facing a criminal trial from the current 14 to 12, and to toughen requirements for foreign workers’ families benefiting from the national health service.

On diplomacy and national security, Yoon vows to seek "complete and verifiable denuclearization" of North Korea and to “rebuild trust and strengthen future-oriented ties” with the US.

To this end, Yoon pledged to draw up a "foreseeable road map" and to uphold international sanctions until complete denuclearization is achieved. However, he left possibilities open for economic aid in return for "real denuclearization" measures the North takes.

Yoon envisions Seoul playing a central role in international cooperation and in multinational and inter-Korean negotiations regarding denuclearization.

On the defense front, Yoon pledged to build up anti-missile defenses and introduce additional THAAD batteries in South Korea.

Under his leadership, Yoon plans continuous investment in nuclear energy to contribute to Korea's drive for carbon neutrality and to increase related exports.

Second, he pledged to "normalize" education in schools and to provide equal opportunity in education. Third is to establish an "education ecosystem based on autonomy."

To achieve education goals, Yoon has vowed to supply equipment required for an "AI education revolution," to improve fairness in entrance to universities and to aid high schools and junior colleges in producing highly trained individuals.

On cultural issues, Yoon pledged to ensure wider access to culture and to build a sustainable and fair cultural ecosystem.