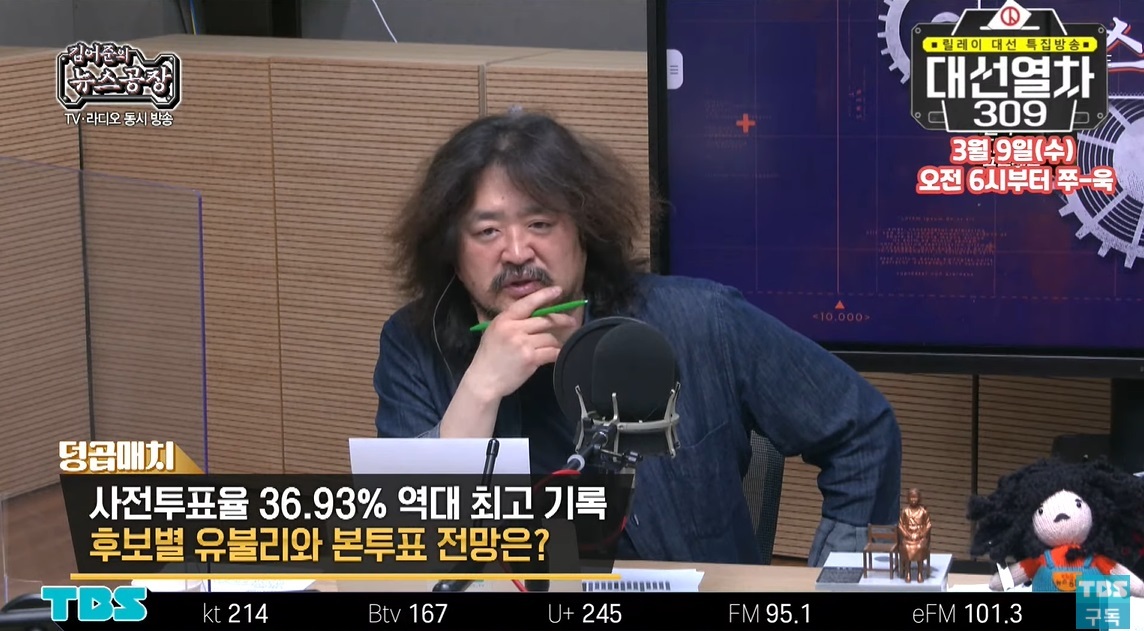 The radio broadcaster faces possible sanctions for allowing popular left-wing journalist Kim Ou-joon, 55, who openly declared support for Democratic Party’s presidential candidate Lee Jae-myung, to continue hosting the show in violation of the Election Broadcasting Code. Kim has been hosting the show since 2016.

The Election Broadcasting Code states that anyone who openly supports a specific candidate should not host politics-related broadcasts during the official election campaign period.

“Lee Jae-myung is a person who came all the way to this point by himself. Now you have to help (him) out.” Lee said duringan appearance on “DAS Boeida,” a YouTube show hosted by Ddanzi Ilbo, a politically progressive web-based news outlet which he heads, last October.

Kim founded Ddanzi Ilbo in 1998 with the goal of offering alternative perspectives that were not covered by the mainstream media. Kim quickly gained a loyal fan base for his dark, satirical and scathing humor, analyzing controversial issues in domestic politics and business scandals, and engaging in fiery debates with interviewees.

Since 2018, the Korea Communication Standards Commission has penalized “Kim Ou-joon’s News Factory” six times for a violation of objectivity. In the last year alone, the program received administrative guidance measures on 17 separate counts, amid the Seoul and Busan mayoral by-elections and the upcoming presidential race.

At a recent meeting, 5 out of 9 commission members agreed that the TBS show was in violation of the relevant regulation and requested statements of opinion from the program, the Election Broadcasting Deliberation Commission said Monday.

Upon receiving the statements by TBS, the committee will proceed to decide the penalty, ranging from minor warnings and fines, to suspending the program.

In the meantime, TBS confirmed that it will proceed with its plan to broadcast presidential election results live, with Kim as host, starting at 7 p.m. on Wednesday, as scheduled.