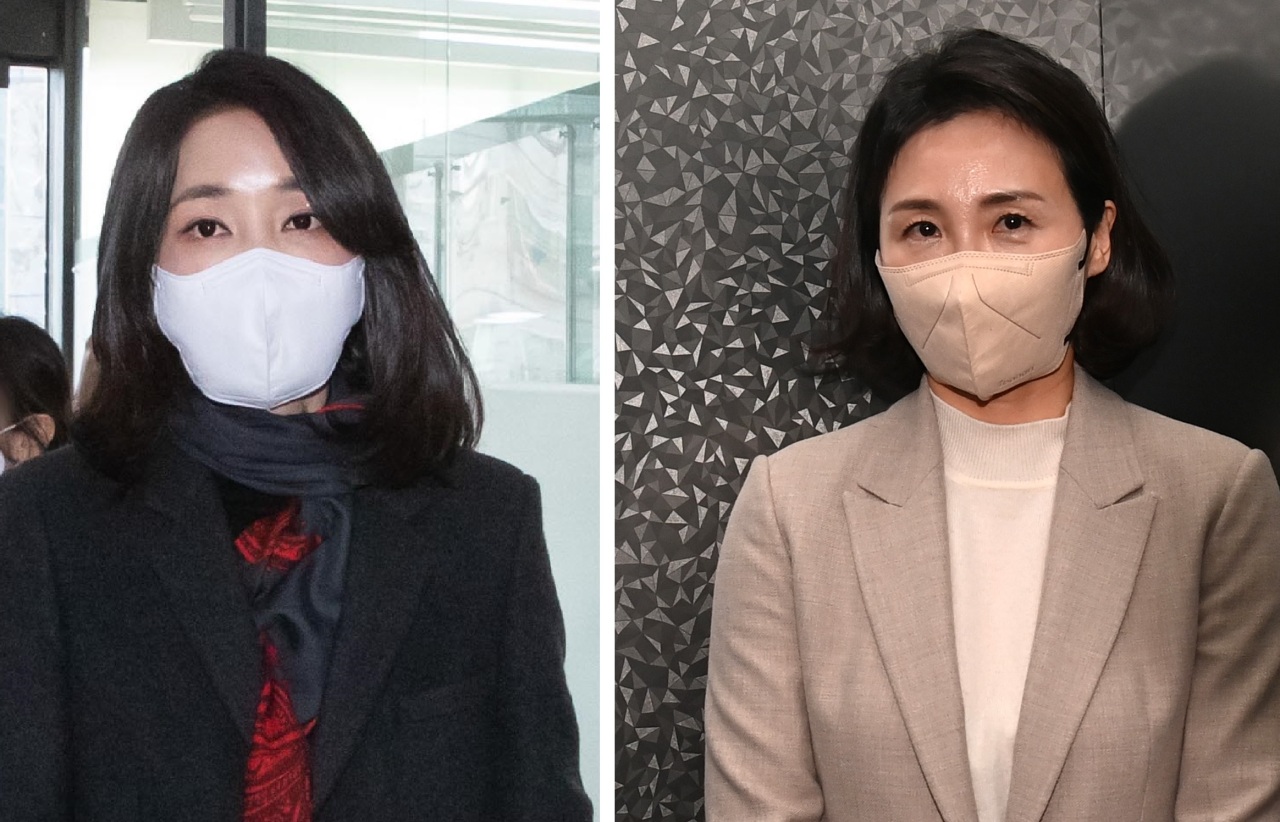 In past elections, the spouses came to play the role of a strategic surrogate for the presidential hopefuls, embarking on campaign visits of their own to woo voters.

The wives of the two front-runners, Lee Jae-myung of the ruling Democratic Party of Korea and Yoon Suk-yeol of the main opposition People Power Party, however, have been missing in the election scene, except for when they separately made headlines for embarrassing scandals and allegations of which they may take legal responsibility for.

Kim Hye-kyung, the wife of Lee Jae-myung, had appeared before the public to join her husband in electioneering events and also made campaign visits alone, until accusations of power abuse surfaced. 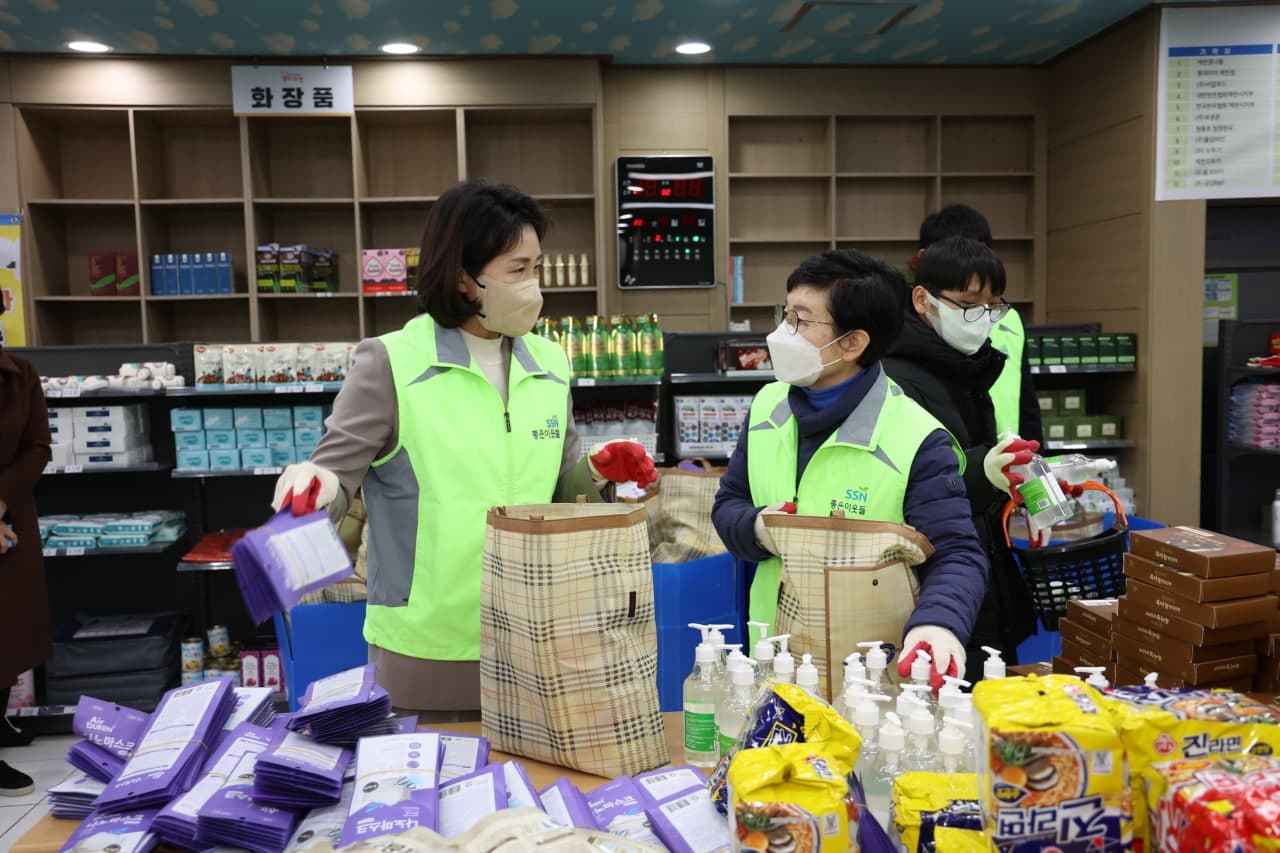 Kim Hye-kyung, the wife of presidential candidate Lee Jae-myung of the ruling Democratic Party of Korea (left), helps pack items at a volunteer event in Jecheon, North Chungcheong Province, on Jan. 21. (Democratic Party of Korea)
In late January, Kim was accused of having abused her power by ordering government officials to assist her in her private errands, when her husband was serving as the governor of Gyeonggi Province.

A whistleblower, who worked in the provincial government while Lee was in office, claimed that Kim had ordered members of the public office to clean her house, fetch prescribed medicine and deliver food for her, among others. Kim has also been accused of misappropriating state funds using Lee’s corporate credit card.

Kim apologized in a press conference on Feb. 9 for “failing to draw a distinction between her public and private life.” Since then, she has disappeared from the public eye. 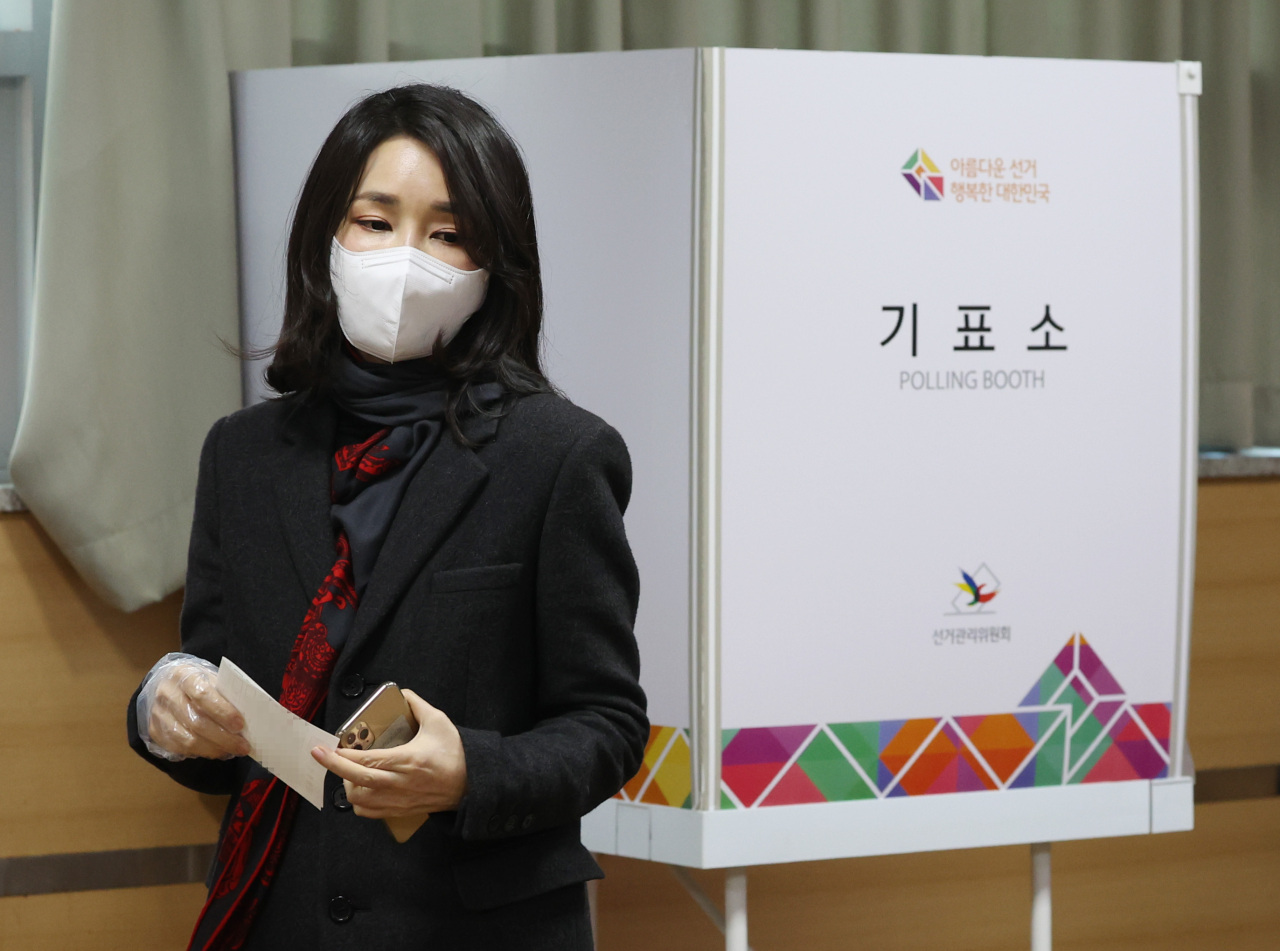 Kim Keon-hee, the wife of presidential candidate Yoon Suk-yeol of the main opposition People Power Party, walks out of a polling booth in Seoul on Friday. (Yonhap)
The situation is similar for Yoon’s wife, Kim Keon-hee, who also heads a cultural contents company.

Not long after Yoon announced his bid for presidency, Kim Keon-hee came under fire for a series of allegations, which include her falsifying parts of her resume when she applied for jobs at universities in 2007 and 2013.

In light of the controversy, Kim Keon-hee held a press conference to deliver an apology and said she had “exaggerated” her career history to look good.

Allegations on her involvement in a stock manipulation case, that is currently being investigated by the prosecution, also appear to have thrown a wrench into plans to join in on the canvassing activities for her husband. Rumors have also circulated that Kim Keon-hee is closely associated with shamans, though Yoon has denied the links.

On Friday, when the two leading presidential candidates Lee Jae-myung and Yoon Suk-yeol each cast their ballots aa different poll stations in the early voting period, they were not accompanied by their spouses.

Yoon’s wife, Kim Keon-hee, cast her ballot alone on Friday, at the polling station near her house in Seocho district, Seoul.

She only made two other public appearances, aside from her public apology and when she voted: on Feb. 14, when she met with pastor Kim Jang-hwan, the chairman of Far East Broadcasting Co., and on Feb. 17, when she visited Bongeunsa, a Buddhist temple in Seoul near her house.

Lee Jae-myung’s wife, Kim Hye-kyung, is expected to cast her ballot on election day on Wednesday, according to the ruling Democratic Party of Korea.

The candidates’ two parties said separately that the spouses will not be taking part in canvassing activities in the remaining days before the election on Wednesday.