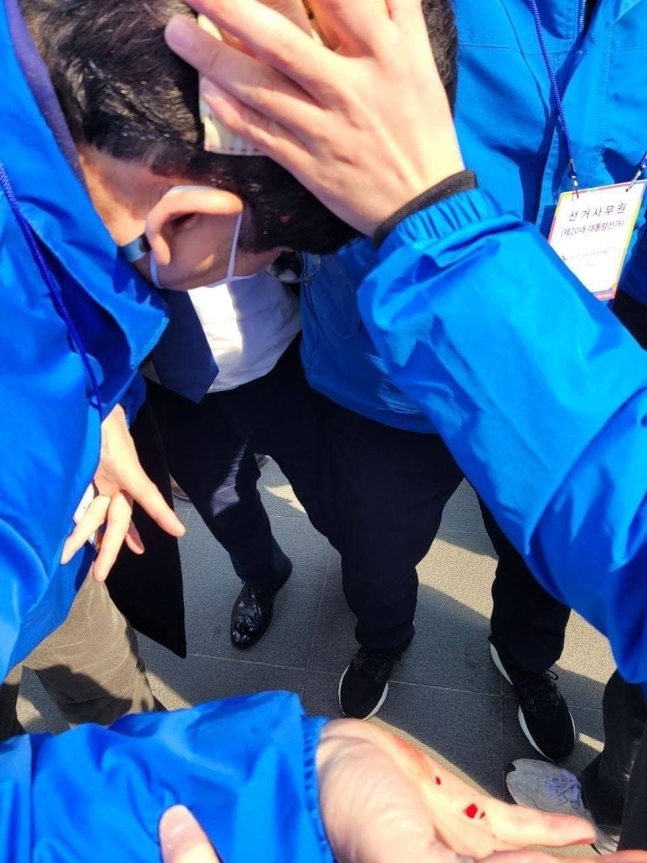 The image shows Rep. Song Young-gil's head after being hit by a hammer during a campaign rally held in Seodaemun-gu, western Seoul, on Monday. (Democratic Party of Korea)
Rep. Song Young-gil, head of the ruling Democratic Party of Korea, received hospital treatment Monday after being struck by an object wielded by an unidentified man while campaigning for the presidential election in the streets of Sinchon in Seoul.

The suspect, arrested at the scene and transferred to a nearby police station, was seen wearing a hanbok-like outfit and was reportedly a YouTuber. He hit Song with a blunt weapon covered several times with a black bag, according to an official at the scene.

The ruling party released a statement, saying the perpetrator is being investigated by police in Seodaemun-gu, and the investigative agency will reveal the details of the case. "Disturbing election campaigns with violence is a serious threat to democracy," the statement added.

Song was scheduled to participate in a campaign event at 12:15 p.m. at the square in front of Uplex in Sinchon. But he canceled his appearance to receive medical treatment and rest, the party said.

The main opposition People Power Party released a statement condemning "violent acts that threaten democracy" and wished Song a speedy recovery, adding "violence is unacceptable for any reason.” The party called on the police to clarify the case through a swift and rigorous investigation into the perpetrator.

This is not the first time a politician has been attacked during an election campaign season.

On May 20, 2006, Park Geun-hye -- the eventual president from 2013 to 2017 -- launched a campaign to support then-Seoul mayoral candidate Oh Se-hoon as the representative of the conservative Grand National Party in an alley near the Hyundai Department Store also in Sinchon.

A 50-year-old man named Ji Choong-ho attacked Park and cut her face with a box cutter.