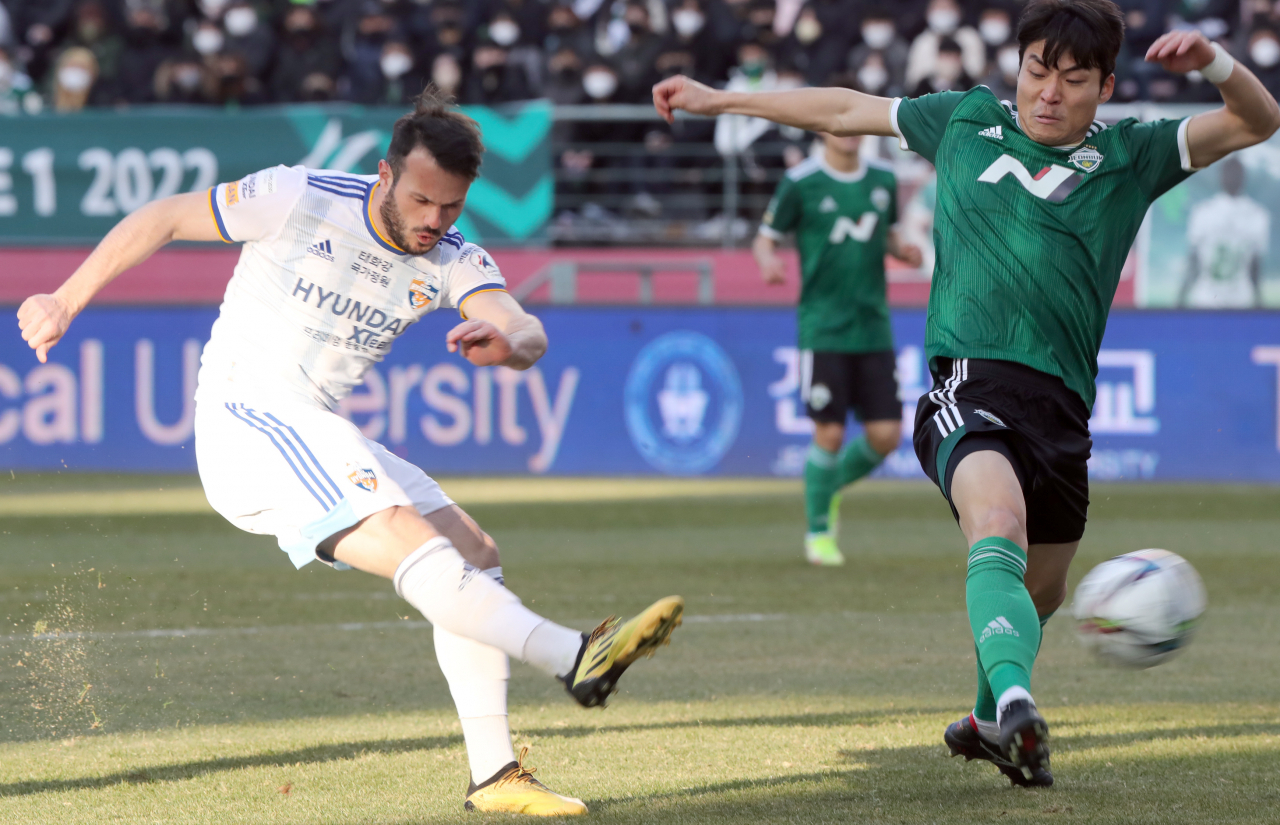 For each of the past three years in South Korean football, Ulsan Hyundai FC finished in second place to Jeonbuk Hyundai Motors. On all three occasions, Ulsan were in a great position to capture the crown, only to see Jeonbuk zip past them late in the season.

Could this finally be the year Ulsan break the curse and win their first K League 1 championship since 2005?

It is still too early to tell, but as the only undefeated club four matches into the 2022 season, Ulsan have at least given themselves reasons to feel good about their chances. They're leading the league with 10 points from three wins and a draw.

That Ulsan extended their unbeaten streak to four matches with a 1-0 win over Jeonbuk on Sunday made the early season surge extra sweeter.

Leonardo, Ulsan's newest forward, had the lone goal of the match at Jeonju World Cup Stadium in Jeonju, Jeonbuk's home, located some 240 kilometers south of Seoul.

This was Leonardo's second match for Ulsan. The Brazilian had won scoring titles in lower-tier competitions in Japan in 2018 and 2019, and Ulsan, which have lost several key attacking players from last season, are counting on the 24-year-old's nose for the goal.

And Ulsan will need offense from whatever sources they can get after losing forward Oh Se-hun and midfielders Yoon Bitgaram, Lee Dong-jun and Lee Dong-gyeong. They all made important offensive contributions for Ulsan during their run of three straight runner-up finishes, and their collective scoring and playmaking abilities may never be fully replaced.

Ulsan head coach Hong Myung-bo said neither Ulsan nor Jeonbuk are at their best at the moment, which made the away victory particularly "gratifying" for him.

"We weren't perfect by any means, but we still tried to stick to our brand of football," Hong said. "We wanted to frustrate our opponents with our passing. And we wanted our players to have fun on the pitch."

Scoring has not been an issue yet for Ulsan this season, as they are tied for second with five goals. At the other end, they have also allowed the fewest goals so far with just one past goalkeeper Jo Hyeon-woo.

Hong said he was especially buoyed by Leonardo's goal, because he wasn't even 100 percent physically.

"Leonardo will have to take on an important role up front, and as he continues to improve, he will develop better chemistry with our midfielders," the coach said. "He scored his first goal without even being fit. I think this must have lifted some early pressure off his shoulders."

Leading the K League in goals are Pohang Steelers, with seven goals in four contests. They're in second place behind Ulsan with nine points on three wins and a loss, far exceeding preseason expectations.

Pohang have been veritable road warriors. With their clubhouse undergoing renovation, Pohang's first six games of the season will all be away from home. They have two more road games coming up and will only make their home debut on April 3.

And they have been losing players for the past couple of years, with the ownership unwilling to open the wallet to retain key players like Song Min-kyu and Kang Sang-woo. But no K League coach has produced more out of less in recent seasons than Pohang's Kim Gi-dong, the 2020 Coach of the Year.

Kim had previously said the objective for this season is to keep Pohang in the top-six mix in the 12-team league. But after beating Incheon United 1-0 on Saturday for their third win in four matches, Kim let on he had readjusted his goal.

"We're going to aim higher, and I've told the players we should go chase that new goal," Kim said. "I am pretty confident. The players know what we're trying to accomplish, and I could tell from the look on their faces that they believed in themselves."

Kim declined to specify what that new objective was. But his forward Lim Sang-hyub did it for him.

"We're going to try to win the championship," Lim said after scoring the winner versus Incheon. "We feel confident we can go up against any team. We will never go down without a fight." (Yonhap)