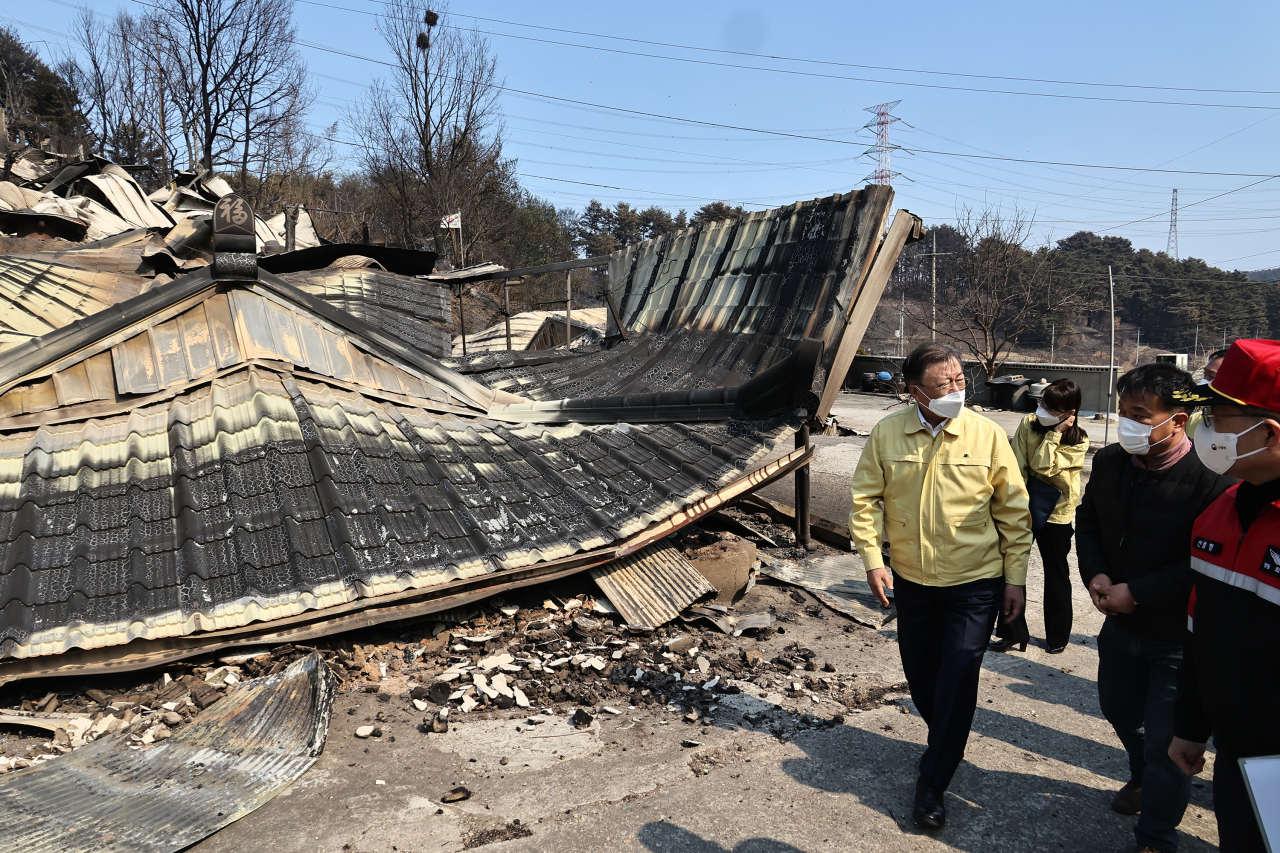 Accompanied by Minister of the Interior Jeon Hae-cheol and Lee Jin-seok, presidential secretary for state affairs, Moon visited the Uljin National Sports Center shelter where about 500 Uljin residents were staying after being urgently evacuated.

Moon told residents at the site that the government is working to extinguish all the main fires “as quickly as possible.”

He said he “approved the declaration of Uljin and Samcheok as special disaster zones” in the morning for the state to directly take steps to restore the damaged regions.

Cheong Wa Dae spokesperson Park Kyung-mi said the target of this special disaster area declaration was Uljin and Samcheok, where forest fire damage is severe, and the government will push for additional declarations in other regions in consideration of the damage situation.

With the declaration of special disaster areas, the government will cover part of the cost of repairing houses and other property damaged by the fires. For private facilities, 70 percent of the cost will be covered, while public facilities will be given 50 percent.

In addition, indirect support such as a grace period for payment of local taxes and utility bills will be provided to the affected residents, along with the backing for living stability support, Park said.

A day earlier, the president received the report of the forest fire situation and instructed authorities to make all-out efforts to extinguish the disaster early and expedite support for the victims.

The forest fire, which broke out at 11:17 a.m. on Friday at a hill in Ducheon-ri, Buk-myeon, Uljin, North Gyeongsang Province, spread to Samcheok.

Forest authorities put out fires centered on major areas -- nuclear power plants, gas storage facilities, power transmission facilities -- in the morning as soon as winds subsided. They said 6,324 people in Uljin are being taken to nearby evacuation facilities. The area affected by the wildfire in Uljin and Samcheok is estimated to exceed 13,000 hectares.

The cause of the fire is believed to be a cigarette butt thrown out by a driver, authorities say.

The first ignition point of the Uljin and Samcheok fire was a drainage channel about 10 meters from a two-lane road in San 154, Ducheon-ri, Uljin-gun, North Gyeongsang Province, the Korea Forest Service said. The place is known to have no pedestrian paths and little human traffic.

At the time of the fire, the first reporter said, “White smoke rose and suddenly a pillar of fire soared more than 10 meters.” The fire engine arrived about 20 minutes after the resident reported it, but the flames had already spread to the mountainside with the strong winds in dry weather.

Another forest fire, which began at around 1:08 a.m. on Saturday in a house in Okgye-myeon, Gangneung, Gangwon Province, quickly spread to Donghae due to strong winds. So far, about 1,800 hectares of forest and 60 buildings have been burned.

The Gangneung Police Station said Sunday it had applied for an arrest warrant for a man in his 60s on charges of arson and violation of the Forest Protection Act.

He is accused of setting fire to his home and empty house with a torch, which spread to the nearby forest. Police were dispatched after receiving a report from a nearby resident and caught him in the act. At the time of arrest, police confiscated a helmet, torch and ax as evidence. He admitted to the arson, saying he committed the crime because residents “ignored” him for years.