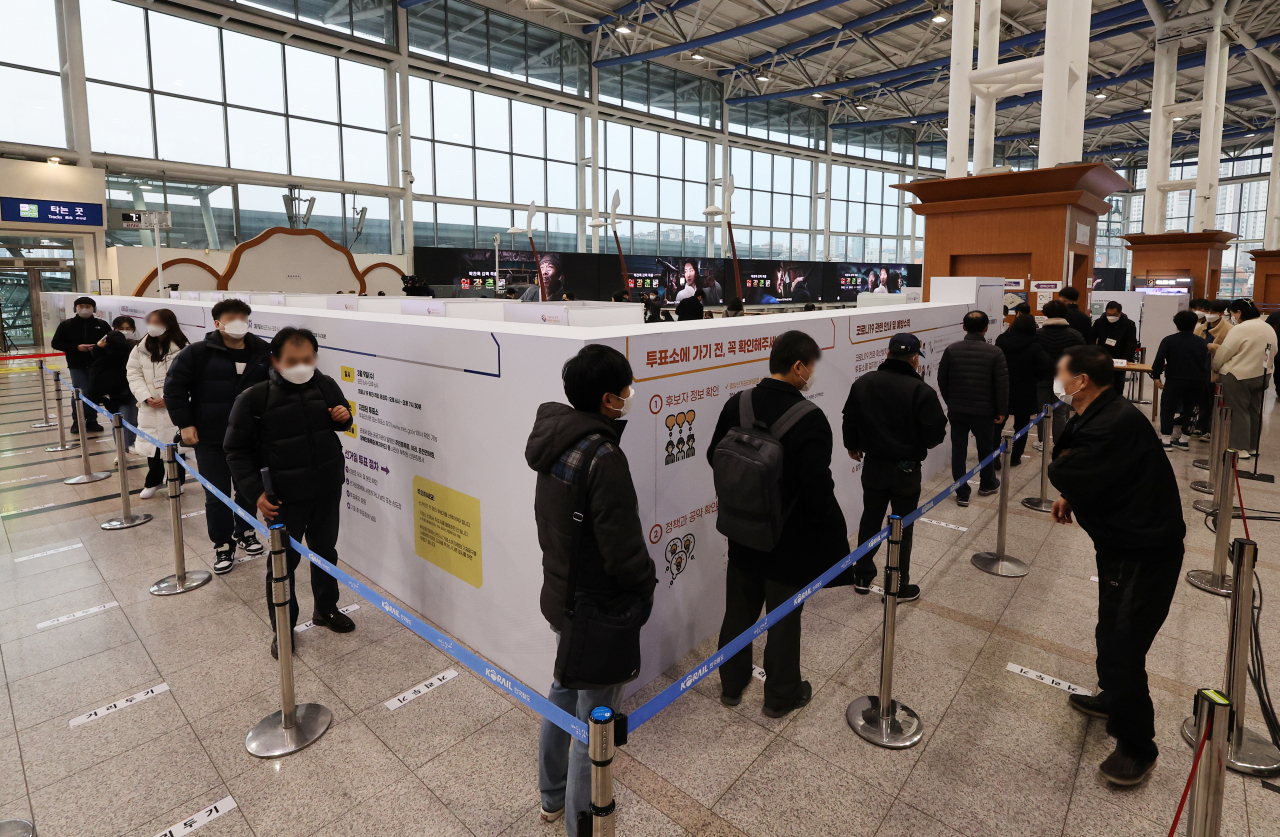 Voters stand in line to cast their ballots at a polling station in Seoul Station on Thursday, the first day of two-day early voting for the March 9 presidential election. (Yonhap)

Separate voting booths were set up for those infected with COVID-19, including 10 special polling stations at big hospitals, as early voting got under way for next week's presidential election amid soaring virus cases.

This year's election takes place as the wave of the omicron variant has been spreading rapidly in South Korea, pushing the country's daily virus cases to record highs. Friday's tally reached an all-time high of 266,853 cases.

Amid concerns that the virus situation could deprive the voting rights of hundreds of thousands of infected people, the National Assembly passed legislation last month to allow COVID-19 patients and people in quarantine to vote separately for the March 9 presidential election.

For early voting, COVID-19 patients will be allowed to vote on Saturday, the last day of early balloting. They will be allowed to leave their homes from 5 p.m. and must arrive at early polling stations before 6 p.m. in order to vote.

Virus patient early voting will be held in separate areas away from non-infected voters from 6 p.m. to 7:30 p.m.

Patients and quarantined people must present temporary leave permits issued by local health offices through mobile text messages. They will be restricted from using public transportation to travel to their voting stations.

They must also immediately return home after voting and cannot stop by other places. Violators can face punishments of up to one year in prison or a maximum 10 million won fine.

For Wednesday's main voting, virus patients will be allowed to vote from 6 p.m. to 7:30 p.m. at their nearby polling stations under the same rule as early voting patients.

According to health authorities, those who have tested positive in a self-test kit but with negative polymerase chain reaction test results are allowed to vote along with non-patient voters.

Voters are asked to wash their hands before leaving their homes and refrain from being accompanied by children at polling stations. Temperature checks will be conducted and mask wearing will be required at all times except during identification checks.