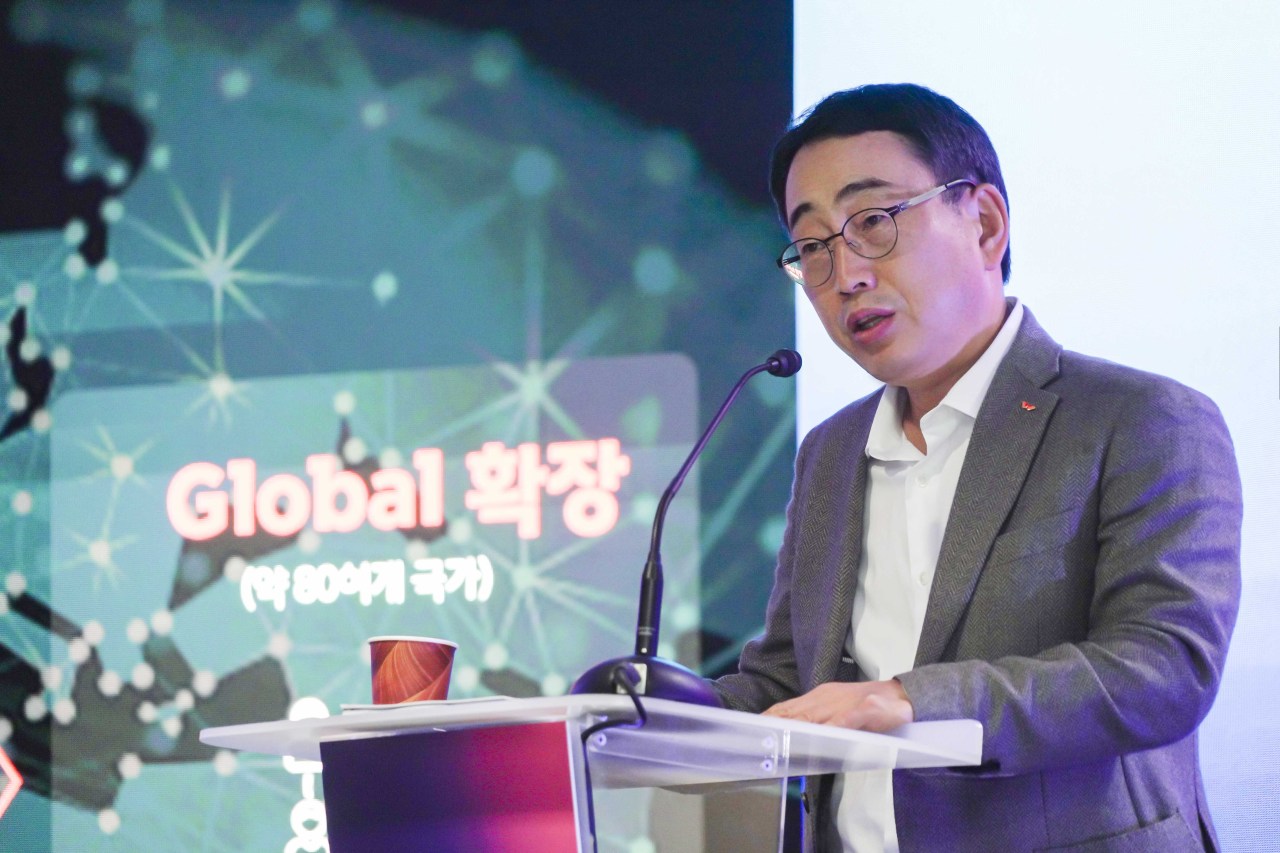 SKT CEO Ryu Young-sang speaks to reporters during a press conference at MWC 2022 held in Barcelona, Spain, on Monday. (SKT)

During a press conference, Ryu pledged to make a foray into those future technologies this year as the company has accumulated enough know-how on 5G, which was commercialized three years ago.

Based on its 5G experience, SKT aims to introduce its metaverse platform dubbed “ifland” to 80 countries this year. Launched in July, ifland has received more than 1,500 partnership requests at home.

“Ifland will be combined with an ‘AI agent,’ which will go back and forth between the metaverse and reality to engage in new experiences on behalf of users and become intelligent on its own. The AI agent will allow us to live two lives simultaneously,” the CEO said.

“SKT is considering a unique economic system inside ifland where AI agents can participate in economic activities.”

The economic system will include an open market applied with cryptocurrency technologies such as NFTs and blockchain.

SKT further plans to evolve ifland into an “AI-verse” where AI agents, economy systems and backend infrastructure are all merged together.

On top of ifland, Ryu vowed to introduce the next model of its AI semiconductors by the end of this year or the start of 2023 to become the “top-tier” player in the market.

“The size of the AI chip market will grow 44 percent every year to reach 40 trillion won ($33.3 billion) in 2025. As demand (for AI chips) spikes for mobile edge computing, machine learning and servers, we decided to enter the global market,” the CEO said.

In 2016, SKT embarked on an AI chip development project and later introduced a prototype named “Sapeon” in 2020. The prototype, though cheaper than a GPU chip, can process images much more efficiently, roughly 6,700 images per second, with the amount of electricity required for lighting up a light bulb.

The company plans to “pour everything” into commercializing the Sapeon AI chips in the manufacturing, security, media and auto sectors.

Amid the growing importance for cybersecurity, SKT said it would become the top player in the quantum cryptography market.

SKT acquired the world’s first quantum cryptography company IDQ in 2018 and the technology has been used several times in the telecommunications, financial and public networks in major North American and Asian countries.

The company also applied quantum cryptography technology to its 221-kilometer-long 5G network in 2019, which it claims it was the first to do so. In collaboration with Samsung Electronics, SKT rolled out the world’s first quantum cryptography smartphone Galaxy A Quantum.