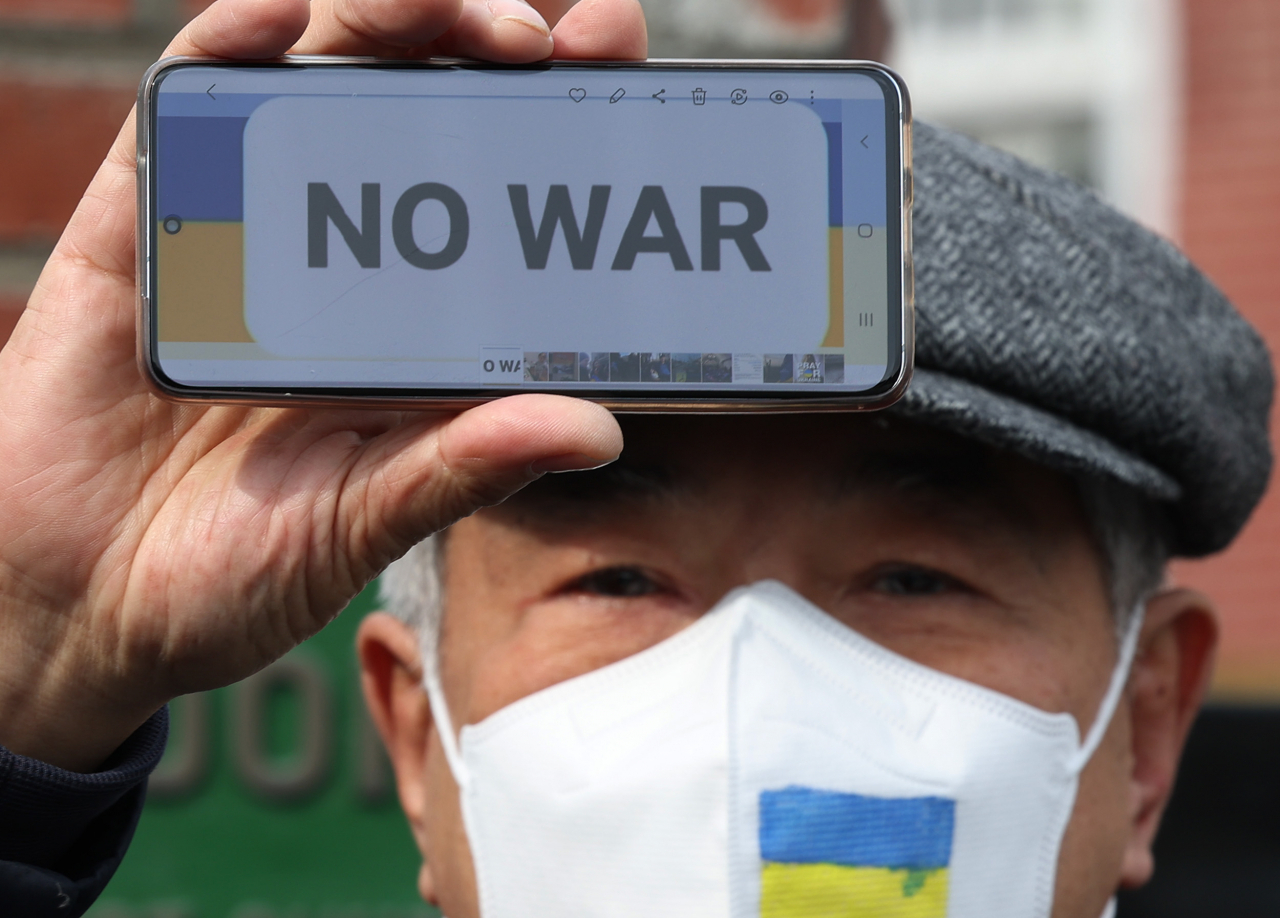 A South Korean protests Russia for its invasion of Ukraine in front of the Russian Embassy in Seoul on Monday. (Yonhap)

South Korea will seek close consultations with the United States to receive an exemption from Washington's recently expanded sanctions against Russia to minimize the impact of the restrictions on local firms and the economy, the country's top trade official said Monday.

Last week, the US government announced the Foreign Direct Product Rule (FDPR) for "all of Russia" as part of sweeping export controls over its recent invasion of Ukraine, which requires companies to receive a license from the US for tech-related items using US technology before they can be shipped to Russia.

The FDPR aims to block Russia's access to global high-tech products and other major items, such as semiconductors. The measure is feared to affect major South Korean exporters, including leading global chipmakers Samsung Electronics Co. and SK hynix, as they use US technology and software.

During a meeting with trading company officials, Trade Minister Yeo Han-koo said that the government will hold director-level consultations with the US Commerce Department this week to seek exemptions from the rules for local firms.

"To prevent possible damage to our companies, we will expedite efforts to secure exemptions to the restrictions. I will also reach senior US officials to discuss the matter," Yeo told the officials.

"We will also swiftly wrap up ongoing consultations with the US regarding our active joining of the international sanctions against Russia."

The government will also focus on minimizing the impact of Western nations' financial sanctions against Russia on local firms as it has decided to join the global move to remove some Russian banks from the SWIFT financial transaction network.

The US and its allies have tightened sanctions against Russia over its invasion of Ukraine, as they agreed to exclude some Russian banks from SWIFT, an international settlement system where trillions of dollars change hands for cross-border payments.

But a list of selected Russian banks subject to the sanctions and the timing of the implementation of the punitive actions have yet to be announced.

"As a responsible member of the international community, the Korean government supports global efforts to curb (Russia's) military attack and to seek to resolve the situation peacefully, including the imposition of financial sanctions," the finance ministry said.

Concerns are growing that local firms and its nationals in Russia could face difficulties in making money transfers due to the SWIFT exclusionary measure.

The Seoul government said last week it plans to allow local firms and banks to use alternative ways for settlements, if needed, in a bid to ensure that trade-related transactions with Russia will not be disrupted.

Local banks' exposure to Russia, including potentially risky loans and investment, came to $1.47 billion as of end-September, accounting for 0.4 percent of their total external exposure, according to the Financial Services Commission.

The government said although local banks have minor exposure to Russia, it will strengthen its monitoring of fund flows at local financial institutions due to uncertainty stemming from the financial sanctions. (Yonhap)