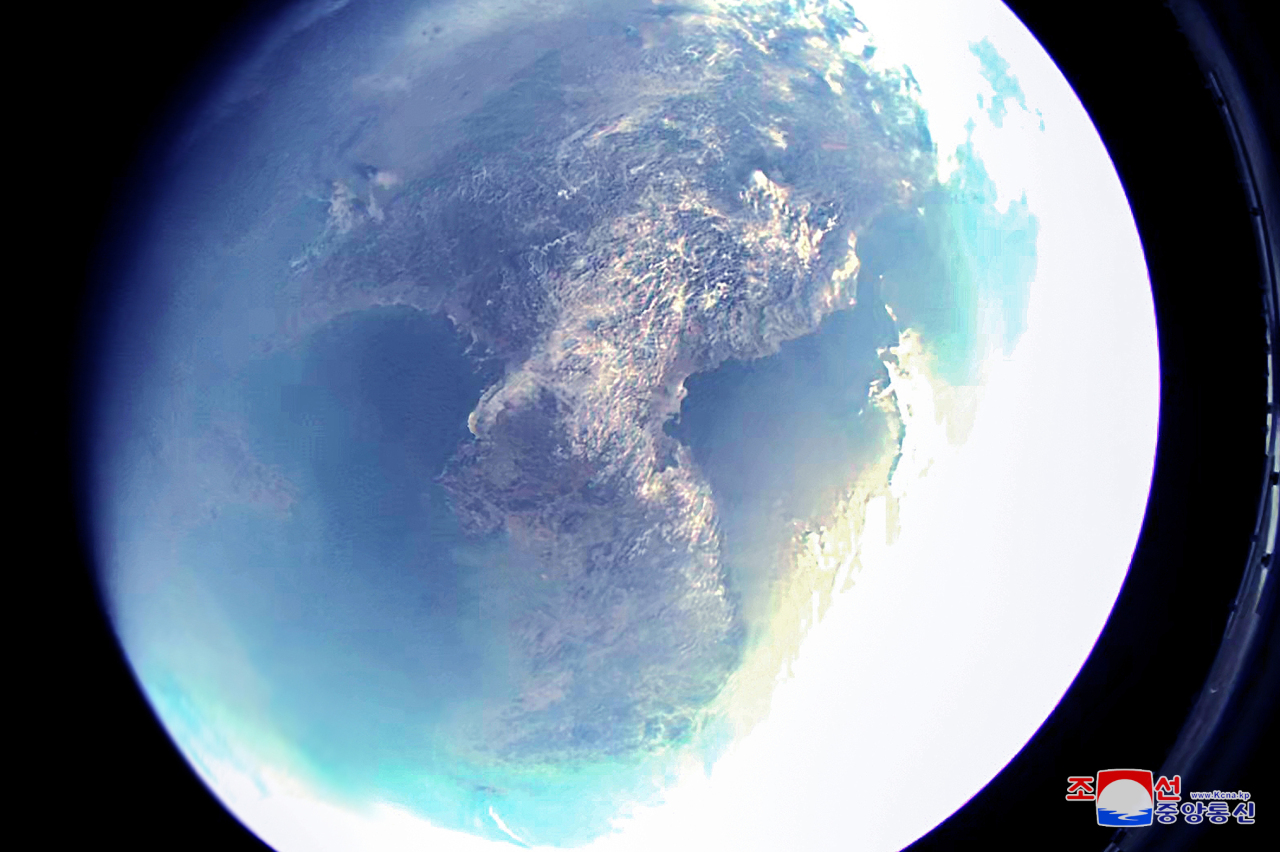 This photo, released by the Korean Central News Agency on Feb. 28, 2022, shows an image of the Korean Peninsula taken by a camera attached on a projectile, launched by North Korea the previous day "for the development of a reconnaissance satellite," although South Korea concluded it was a ballistic missile launch.(Yonhap)
North Korea on Monday said it conducted an “important test” for developing a spy satellite, which the country’s leader Kim Jong-un previously pointed to as a key task in its defense development plan.

The test confirmed the “working accuracy of the high-definition photographing system, data transmission system and attitude (positioning) control devices by conducting vertical and oblique photographing of a specific area on Earth with cameras to be loaded on the reconnaissance satellite.”

The state media said the “test is of great significance” in the satellite development process, without providing further details including the type of launch vehicle used for the test.

The announcement came a day after South Korea’s Joint Chiefs of Staff said North Korea launched a “ballistic missile” eastward from the Sunan area in Pyongyang, which flew around 300 kilometers at an altitude of 620 km.

Analysts said North Korea may have mounted satellite equipment, including a camera, on a ballistic-missile reentry vehicle.

N. Korea’s plan to develop spy satellite
Xu Tianran, an analyst for Open Nuclear Network, said Sunday’s launch could have been aimed at testing a “satellite with a suborbital launch” if the media report is accurate.

“Supposedly, the payload could test how it stabilizes itself in space, direct itself to a certain angle to take photos, and send data back,” Xu told The Korea Herald.

Xu said the media report, albeit independently unverifiable, shows that Pyongyang is serious about “sending a satellite into orbit, using a big rocket,” which “would result in more sanctions.”

“So I would not be surprised if they put a test satellite on an MRBM or a bigger rocket for testing purposes --- the DPRK has shown ingenuity in its weapon testing activities.”

The development of the Intelligence, Surveillance and Reconnaissance systems was a key part of North Korea’s five-year defense development plan, which was proposed by the North Korean leader at the Eighth Party Congress in January 2021.

Pyongyang also said it will “operate a military reconnaissance satellite in the near future.”

But generally, it is hard to confirm the credibility of the report in view of the interchangeability between a space launch vehicle and a missile. The difference is what sits on top -- a satellite or a warhead.

Against that backdrop, analysts said North Korea could have used the strategy of labeling a missile test as a space satellite launch at a sensitive time, such as Russia’s invasion of Ukraine.

In addition, the two images of the Korean Peninsula from space, which were released by North Korean state media, are relatively low resolution, with the quality hardly verifiable due to limited information.

North Korea’s move mainly aims to draw US attention, which has been largely diverted to the war in Ukraine without “overly irritating” the US, Cha said.

Cha explained that Pyongyang’s biggest concern would be being relegated in the Biden administration’s foreign policy priorities.

“It is probable that North Korea tested a Hwasong-12 or 14 at a medium-high angle, but the country may consider that it would be too provocative to explicitly announce the test at this juncture,” Cha said, adding Pyongyang might have tested a Pukguksong-type missile.

“In light of the international political situation, Pyongyang also seeks to justify its test and is more conscious about the international opinion this month, unlike in January,” he continued, adding the country explicitly announced its seven discrete missile launches last month.

Prelude to ICBM test
But simultaneously, Cha said North Korea may set the tone for testing an intercontinental ballistic missile or ICBM for the foreseeable future in the name of space launch activities.

Soo Kim, a policy analyst at the Rand Corp., pointed out that the latest test could be seen as a “sign of another satellite launch to come in the near future” as North Korean leader Kim Jong-un had pledged at the party congress.

“On that note, it could be Kim’s way of telling his audience that he is following through with his plans and keeping his promises,” Soo Kim told The Korea Herald.

Kim said North Korea was “simply picking up where it left off” after a one-month temporary pause in testing missiles during the Beijing Olympics. But Pyongyang’s move suggests that the country has been pressing on toward resuming an ICBM test.

“So in this light, today’s missile test is simply the next step in Kim’s continuum of weapons testing. Let’s also remind ourselves that the regime alluded to ending the moratorium, so this could be another question of ‘when’ versus ‘if’ for the rest of us.”