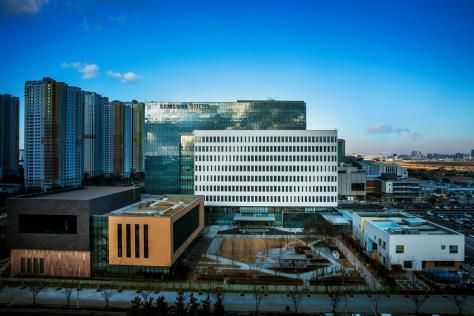 Samsung Bioepis Co. said Monday that it has secured a total of 10 biosimilar products, including five that are globally available, as the South Korean biopharmaceutical company celebrates its 10th year anniversary.

Samsung Bioepis is a joint venture between Biogen and Samsung Biologics Co., one of the world's major contract drug manufacturers.

Five of them, excluding Ranibizumab, are currently being marketed in South Korea, the United States and major European countries.

Ranibizumab, also known as Byooviz, will soon become the firm's sixth biosimilar to be marketed as it also won approval from US and European authorities earlier this year, according to the company.

The seventh biosimilar, Eculizumab, has recently completed its phase three clinical trial, with Samsung Bioepis planning to seek approval from local drug authorities within this year, it said.

Three other biosimilars are all currently under phase three clinical trials, with one of them expected to be completed next month, the company said.

"Samsung Biopeis aims for sustainable growth through endless change and innovation to prepare for the next 10 years," CEO Christopher Ko said in a press release.

Samsung Biologics, the biotech arm of South Korea's Samsung Group, earlier announced that it has reached a deal with Biogen to buy the US drugmaker's entire stake in Samsung Bioepis for $2.3 billion.

Samsung Biologics said the payment for the shares will be made in installments over the next two years, and full ownership will take effect at the time the first payment of $1 billion is made. (Yonhap)