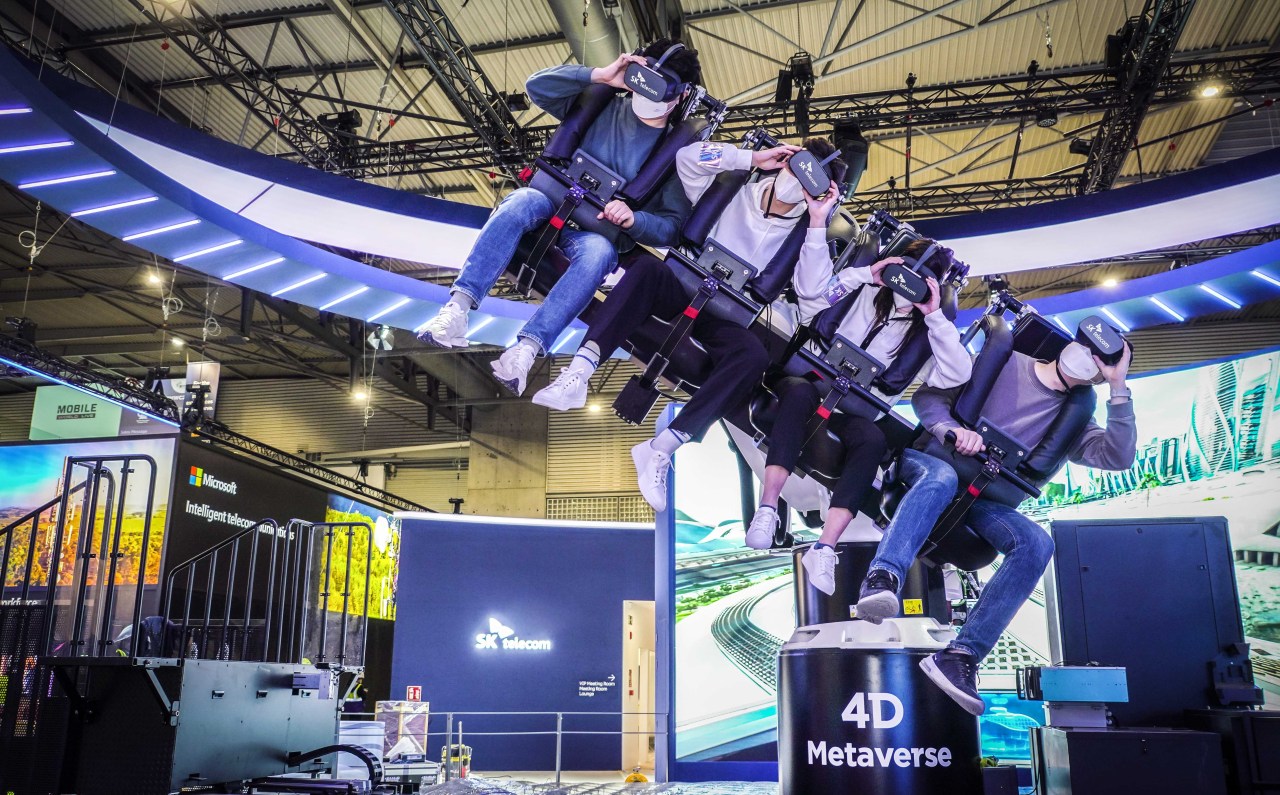 Models are seen enjoying a metaverse-powered urban air mobility concept displayed at SK Telecom exhibition in Barcelona, Spain during Mobile World Congress 2022 (SK Telecom)
One of the world‘s largest tech events, Mobile World Congress, is returning to Barcelona, and South Korea’s telecommunications firms this week are poised to showcase their future technologies for the next decade to come.

All three telecom carriers will be setting up the respective exhibitions at MWC 2022 venue Fira Gran Via, before some 60,000 onsite participants from around 2,000 different companies based in 183 countries.

SK Telecom, which has over 30 million subscribers in Korea, will set up a 792 square-meter exhibition booth located at the center of Hall 3.

The company said visitors at its exhibition are expected to get a glimpse of how its connected intelligence technology could power flying vehicles with the urban air mobility concept displayed there.

Moreover, its solutions for augmented reality car showroom and for virtual reality game boosting will be introduced as the use case of multiaccess edge computing on the 5G network. SK Telecom will also present Nugu Multiagent, the world’s first smart speaker that communicates both in English and Korean.

Also, for the first time in Europe, visitors will also be given access to Sapeon, a low-power chip with artificial intelligence solution jointly by SK Telecom, its memory chip affiliate SK hynix and investment arm SK Square, as well as SK Telecom‘s metaverse platform ifland available in head-mounted display and in foreign languages. 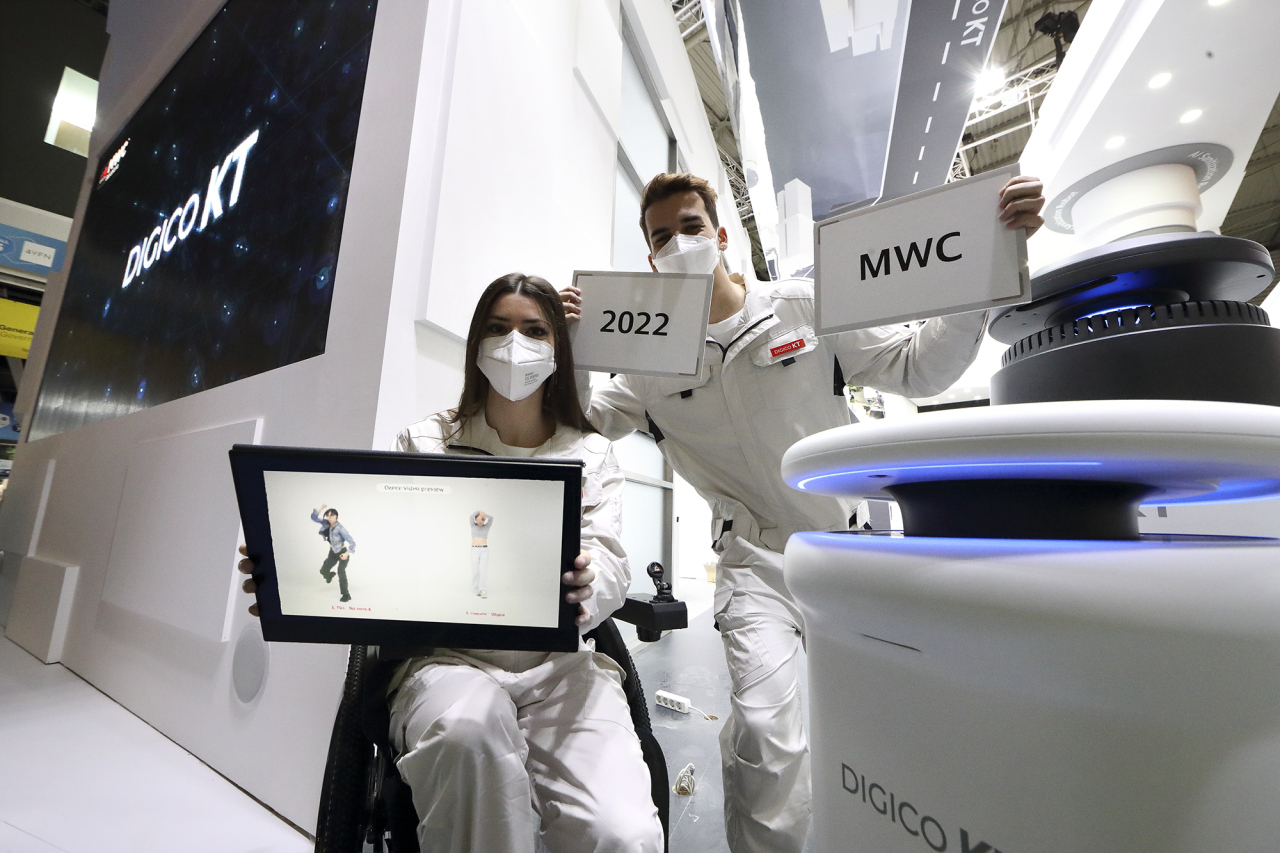 Models pose for a photo with a robot at KT‘s exhibition in Barcelona, Spain during Mobile World Congress 2022 (KT)
Meanwhile, KT’s exhibition will be located in Hall 4, home to MWC‘s newest feature GSMA Industry City, a special exhibit by the host of MWC.

KT, which has 22 million local subscribers, is the sole Korean company that employs a GSMA board member, KT Chief Executive Officer Ku Hyeon-mo.

KT is set to have its autonomous virus-killing robot make a public appearance for the first time. KT said the robot can run for 24 hours, and is capable of sterilizing airborne bacteria and viruses using air plasma, and of disinfecting floors with lamps that emit ultraviolet-C lights -- known to have the shortest wavelength but be most powerful for ultraviolet purification.

Developers of the smart robot is in the course of mounting AI technology to detect air quality real-time, the company added.

This will come along with a number of AI solutions by KT. Its so-called AI Contact Center features an automated customer service that interprets and responds to customer inquiry through an active communication, according to the company. The automated service was launched in Korea last year.

In Hall 2, LG Uplus will showcase its 5G service at its exhibition space. Visitors there will have a taste of U+Dive, an app launched last year in Korea that offers up to some 3,000 media contents, with some of them providing an extended reality experience.

LG Uplus added that it expects to negotiate with over 20 counterparts primarily in Europe and the Middle East at the MWC venue to sell 5G services and contents. The company has so far achieved $23 million in sales of 5G-related goods.

The South Korean telcos‘ role is not necessarily limited to showcasing their own futuristic technology, but to assist their partners with overseas market entry.

SK Telecom said it would install a separate booth in Hall 6 with 11 homegrown startups under the theme of sustainability. Also, KT’s trip to Barcelona will be accompanied by its partners, such as metaverse platform provider Coarsoft and golf swing analysis service provider Idealink.