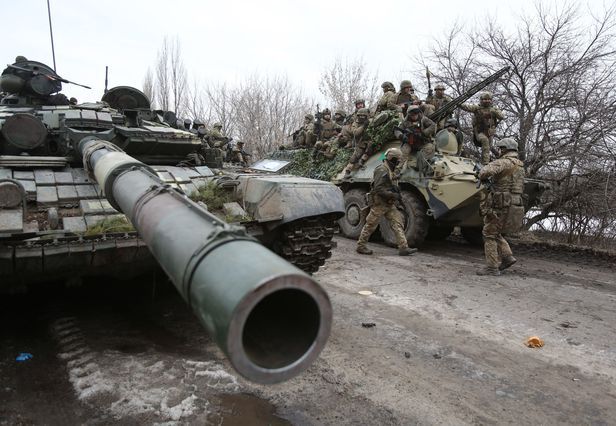 Ukraine forces stand by to respond to the invasion of Russia near the eastern border. (Yonhap)
As the US Biden administration imposes economic sanctions against Russia for invading Ukraine, South Korean firms including Samsung Electronics and SK hynix are expected to take collateral damage.

On Friday, President Joe Biden unveiled comprehensive economic sanctions to cripple the Russian economy. The sanctions would limit the export of products that can potentially increase Russia’s ability to advance its military and aerospace sector.

The sanctions would prohibit companies from selling products such as telecommunications equipment, lasers, sensors and of course, chips to Russia. For Samsung Electronics and SK hynix, who sold chips worth 88.5 billion won ($73.5 million) to Russia last year, the damage is inevitable unless they find an alternative market.

“All the chips in the market are based on designs by US companies, including those manufactured by Samsung Electronics and SK hynix,” a chip industry official said.

Park Jae-geun, the chairman of the Korean Society of Semiconductor and Display Technology, expressed concerns that demand on the entire consumer electronics could slow down.

“The sanctions will indirectly limit the sales of chips that go inside Russian smartphones, laptops and data centers. This can curb the demand on consumer electronics and dampen the chip market,” Park said.

Korean-made cars and auto equipment, which take up 25.5 percent and 15.1 percent of Korea’s exports to Russia, are expected to take a hit as well.

As auto chips are manufactured by five major companies -- NXP of the Netherlands, Infineon of Germany, Renesas of Japan, Texas Instruments of the US and STMicroelectronics of Switzerland -– Korean cars mounted with those chips are likely to face restrictions in the Russian market.

Hyundai Motor and its sister company Kia, who run factories that churn out 230,000 cars per year in Russia, are within the range of the sanctions. More than 90 percent of Korean auto parts exports to Russia go to the two automakers.

“Last year, Korea exported auto parts worth $1.5 billion. For domestic parts companies, Russia is the biggest market next to the US and China. Due to the sanctions, they will be forced to supply their products to somewhere else, but those who can’t will take a hit,” an auto parts industry official said.