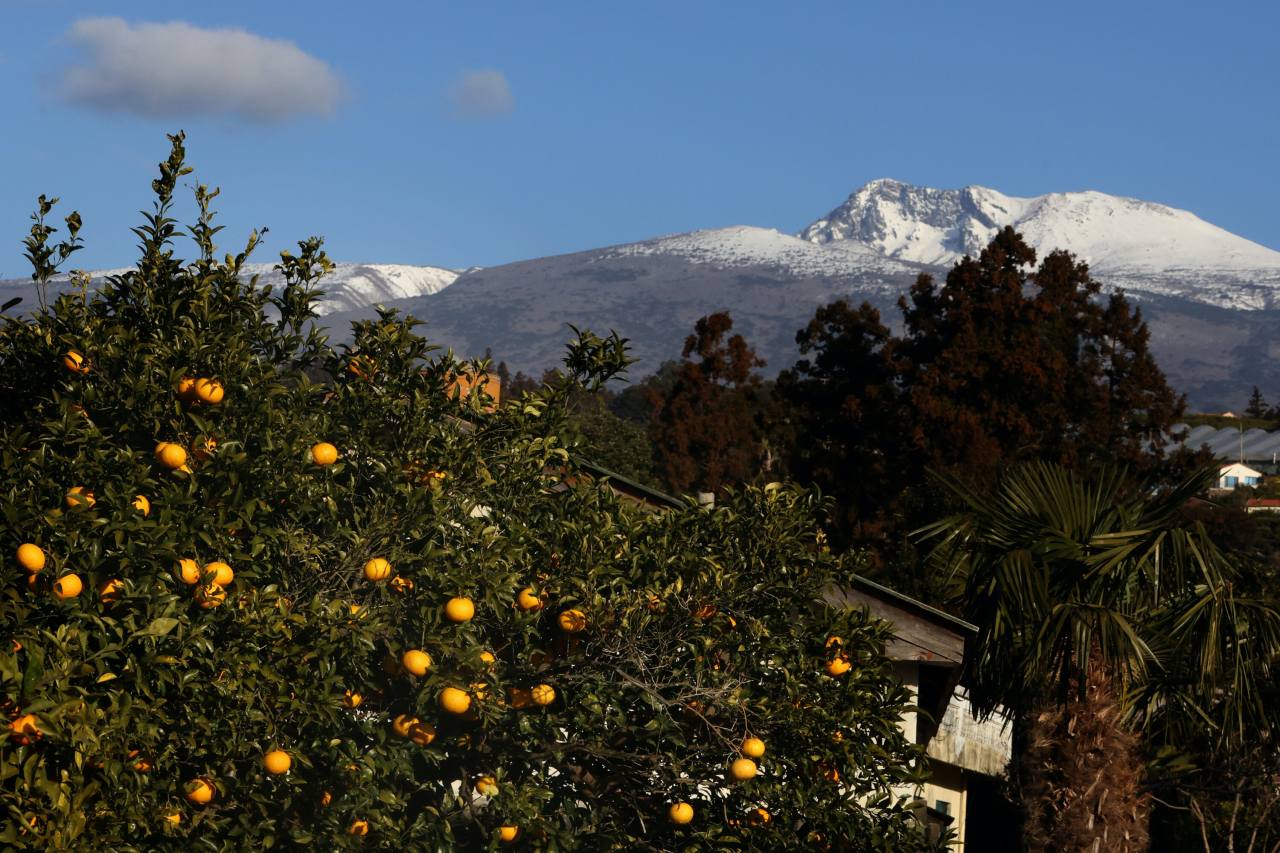 Snow-covered Hallasan, the highest mountain on Jeju Island, is seen behind hagyul, better known as summer oranges, in Seogwipo, Jeju Island.Photo © Hyungwon Kang
Jeju Island has been known for its citrus fruits since its days as the Tamna Kingdom -- its identity before it was taken over by the Goryeo Kingdom in 1105.

When residents of Jeju Island, who were forced to send citrus fruits to the Joseon king in the capital Seoul during the Joseon period (1392-1910), were not always able to meet growing demand, the issue was elevated to the Kingdom's policy.

“The Joseon government nationalized citrus farms to secure harvests and managed 36 citrus orchards for consistent supply of the fruits to the capital city, through early 1900s,” said Song Sang-churl, the head researcher at the Jeju Agricultural Technology Institute.

Researchers have identified at least 126 varieties of citrus fruit on Jeju Island over the years, and that number is expected to grow. 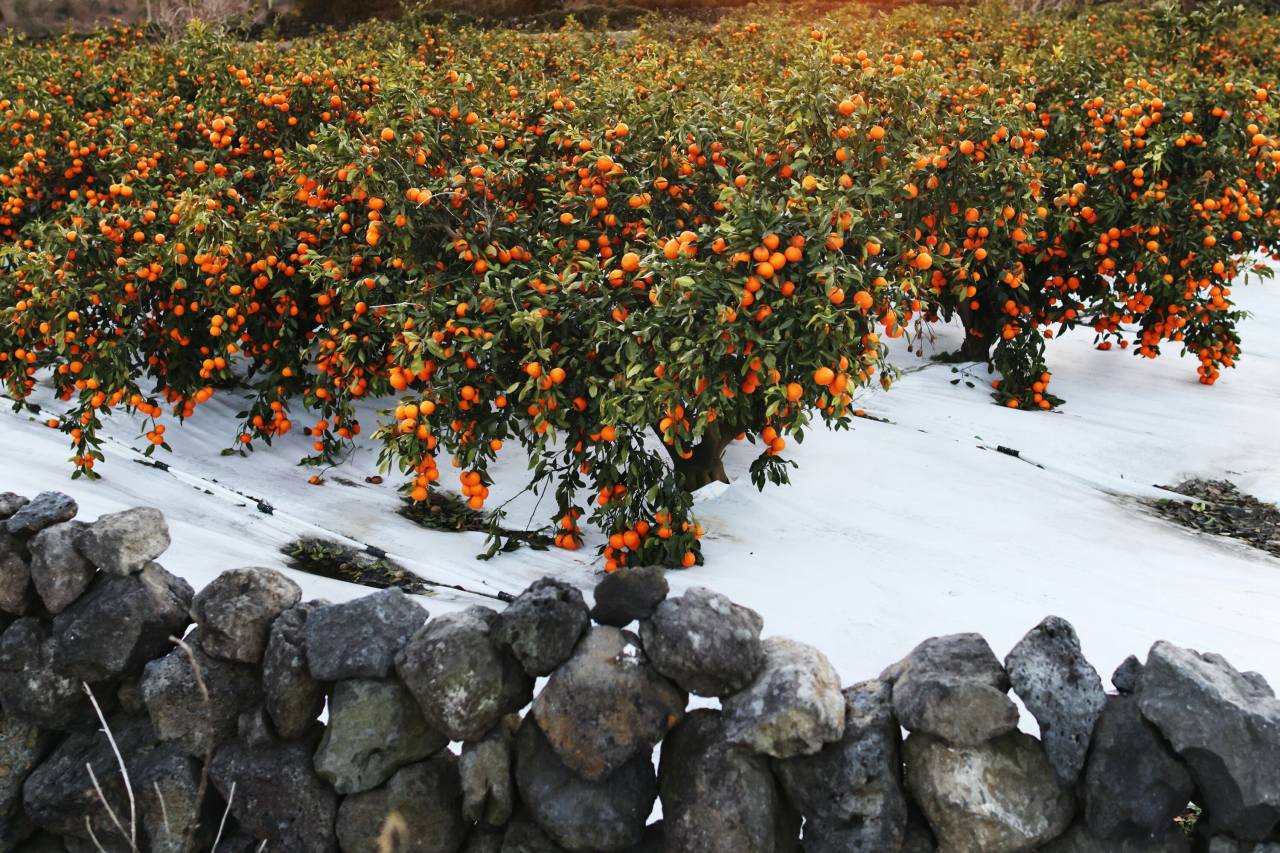 Tyvek sheets cover the ground at a Jeju gamgyul farm to prevent too much water from reaching the roots. Photo © Hyungwon Kang
“At least two government research farms and several private farms are making efforts to develop even tastier citrus fruits on Jeju,” said Song.

The history of the Jeju gamgyul can goes back to 1911, when French Catholic priest Esmile J. Touguet received 14 mandarin orange trees from Japan in return for sending samples of Jeju king cherry blossom trees to his Catholic colleague in Japan in 1908.

The mandarin oranges used to be exported to the US, but they are mostly exported to closer countries such as Russia, Singapore, Hong Kong and Malaysia now, according to the Jeju Agricultural Technology Institute.

The amount of water and sun exposure has everything to do with the quality and taste of citrus fruits.

The world famous California oranges get their sweet and sour taste from southern California’s scorching sun, and the absence of frequent rain. 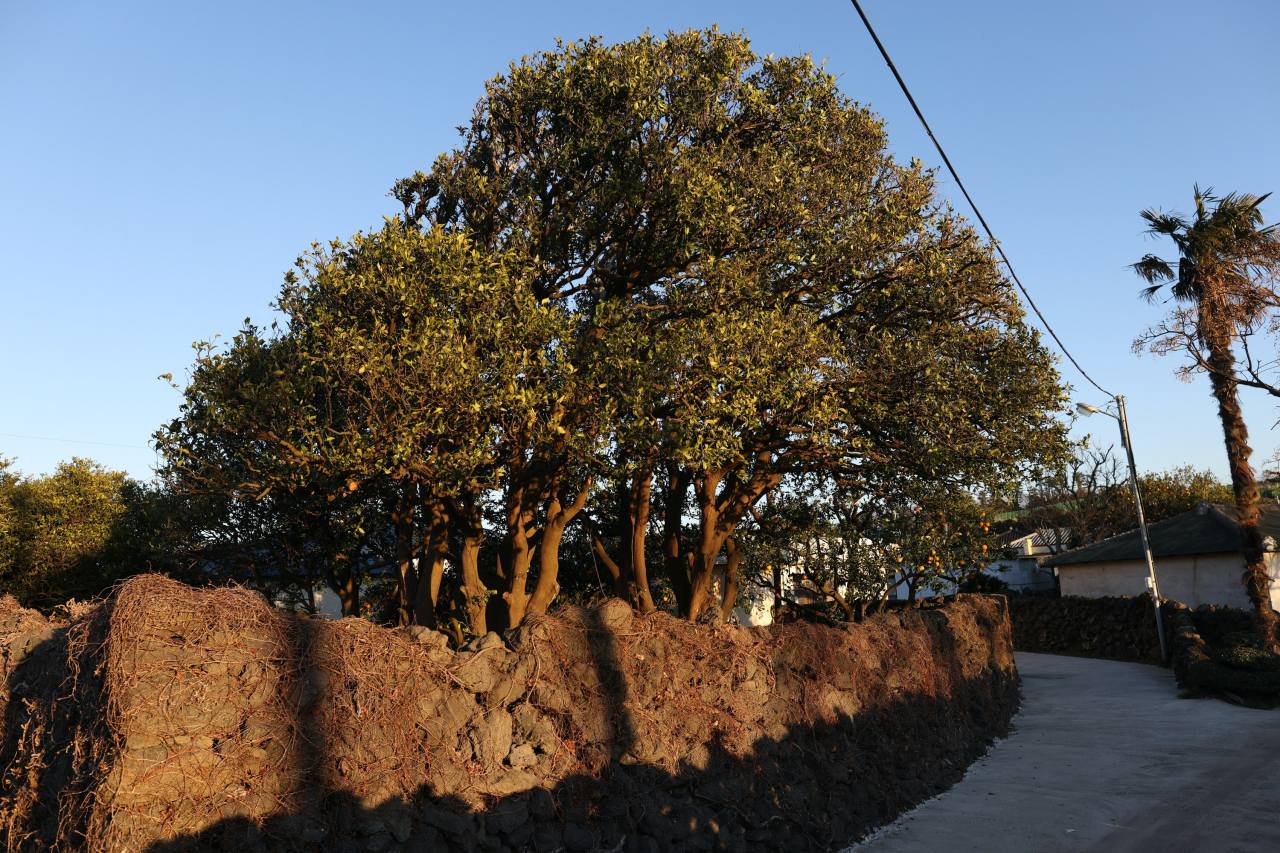 The oldest surviving jingyul trees, planted in the 1600s, stand at the home of Kang Sung-yo and Park Young-ok on Jeju Island. Photo © Hyungwon Kang
On the other side of the continental US, considerably wet Florida produces oranges that are well known for being juicy, and ideal for making orange juice.

Jeju Island gets an average annual precipitation of about 1,800 mm, which is not the best climate for growing sweet citrus fruits.

But clever farmers in Jeju have turned to modern technology to improve the taste of their product.

Tyvek liners, which breathe but work as a moisture barrier, are used as groundcovers at orchards growing Jeju gamgyul. By controlling the amount of water reaching the roots, the orchards are able to produce sweeter tasting mandarin oranges.

The second benefit of the white Tyvek covering the ground is the sunlight reflected from the groundcover.

The pavement covering the ground around the roots of the original mandarin orange tree at the church likely caused the deteriorating health and death of the original tree, according to experts. “Citrus trees can live a very long time, but the roots need room to breathe,” said Song.

Jeju Island has a similar climate to the Los Angeles Basin, a Mediterranean-like climate found in only 3 percent of the world’s land. While there are many other citrus fruit varieties there, one of the most prevalent citrus trees is called hagyul, meaning summer orange. Hagyul is so-named because it fully ripens in the summer months. The hagyul looks like a grapefruit but tastes more like a lemon.

The oldest Jeju citrus tree, a jingyul variety, is a group of three trees over 400 years old located in a Kang family yard. It belongs to the 13th generation of the family of Kang Gye-nam (1574-1632) who planted the citrus trees at the house he built in Aewol, on the northwest of the island. Jingyul citrus peel is used as a raw material in traditional Korean medicine.

Kang Sung-yo, and his wife Park Young-ok, both 78, live in the house with exposed traditional Korean ceiling beams which has been occupied by the Kang family for more than four centuries. Kang and Park were born in the same village but met in Seoul in 1963 while they were studying in the capital city. After a 40-year career in business administration in Seoul, the retired couple returned to the Kang family house. 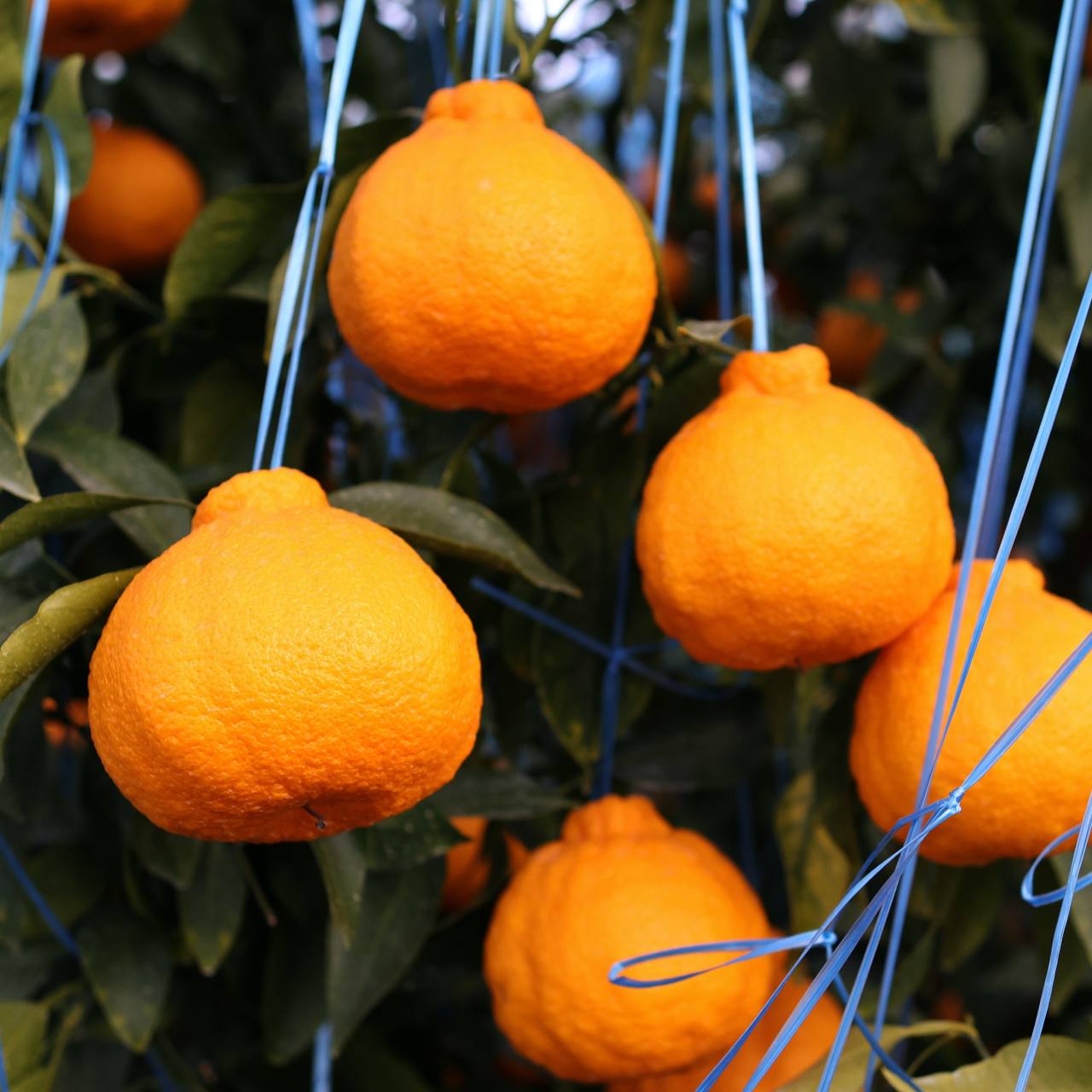 Hallabong, named so for its shape resembling Hallasan, wait to be picked at a vinyl house orchard on Jeju Island. Photo © Hyungwon Kang
Among several Jeju citrus fruit varieties, hallabong tastes like California oranges. Hallabong enjoys a huge popularity in Korea today. Named after the shape of Hallasan, it is grown in greenhouses.

New oranges such as red hyang, cheonhyehyang, and hallabong varieties differentiate themselves from the popular Jeju gamgyul with their larger size and more intense taste.

Yi In-ja, whose family moved to Jeju in 1986 due to her husband’s failing health, has been growing hallabong for 10 years. She grows her 350 hallabong trees in a vinyl house.

The main benefit of an enclosed orchard in a greenhouse is the ability to control the amount of water which the trees receive.

“My secret to producing 23 tons of hallabong this year is to have no weeds on the ground, and withholding water for two months from November, to make my hallabong taste sweeter. After harvesting, I’m planning to shower my trees with 600 bags of fertilizers and calcium vitamins to help them recover and get ready for the next season,” said Yi.