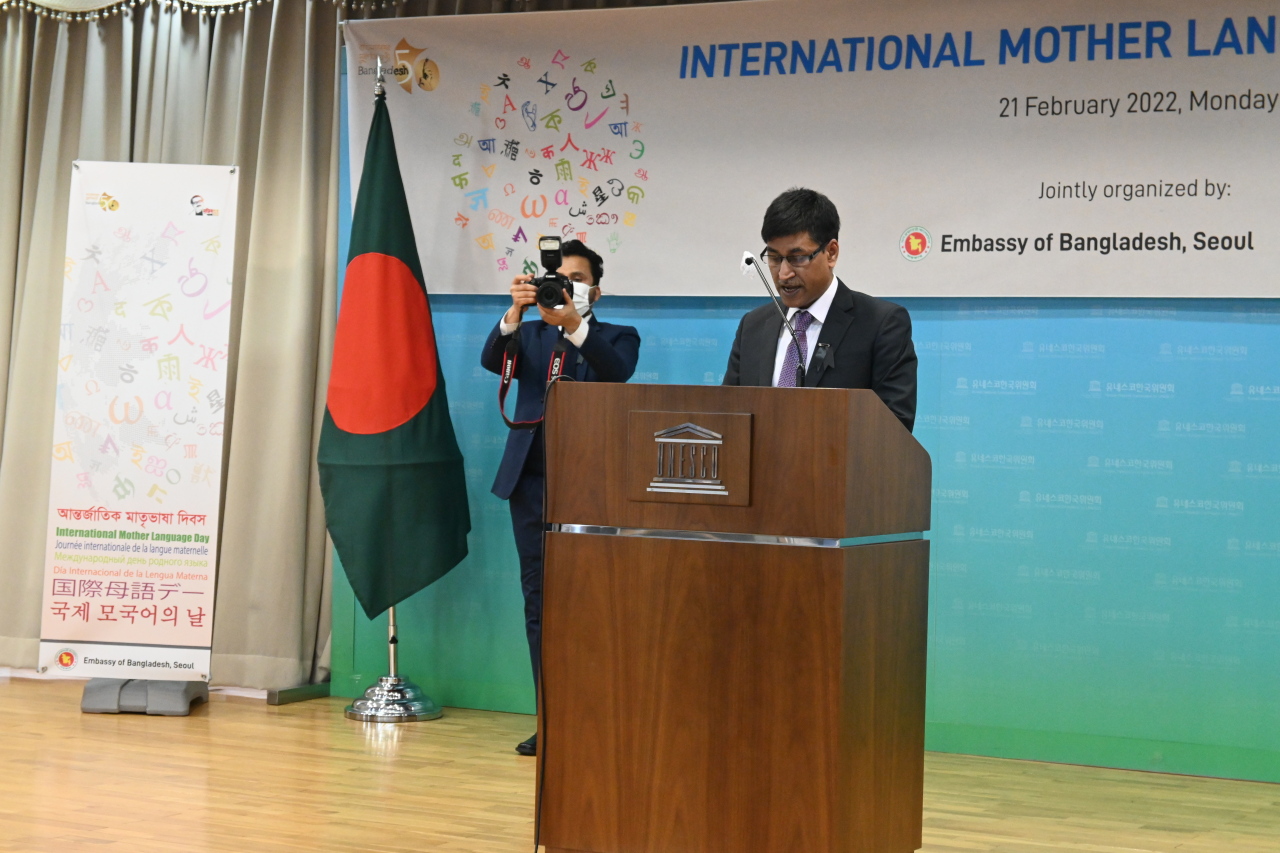 Delivering opening remarks at the event, Bangladesh Ambassador to Korea Delwar Hossain honored those who had lost their lives in the 1952 protests calling for Bengali to be recognized as an official state language.

The then-Pakistan government had forced people to speak Urdu, sparking protests in East Pakistan where the majority of the people spoke Bengali, in what became known as the Language Movement. The protests paved the way for the country’s fight for independence.

Hossain also paid respects to Bangladesh’s first president, Bangabandhu Sheikh Mujibur Rahman, who “played a leading role during the Language Movement in 1952 and subsequently steered the nation to independence” in 1971.

Bangladesh is home to 27 small ethnic communities speaking 42 ethnic languages, and about 15 languages are now endangered, Hossain said, adding that other parts of the world are also facing similar challenges.

To promote awareness of linguistic and cultural diversity, Bangladesh established the International Mother Language Institution in 2010 for the research and preservation of languages in Bangladesh and other nearly extinct languages of the world.

It also enacted the Small Ethnic Communities Cultural Institutions Act in 2010 that is aimed at preserving and developing the cultural heritage and tradition of small ethnic communities of the country. Seven institutes in different parts of Bangladesh offer programs such as language courses and compile dictionaries.

The Bangladesh National Curriculum and Textbook board introduced textbooks in 18 languages to create opportunities for children and promote learning of mother languages in 2017. In 2022, it plans to distribute about 33,000 ethno language textbooks, the ambassador said.

“Fifty percent of 7,000 languages currently spoken in the world may not survive at the turn of the century,” Hossain said, citing the data from a recent study.

“Extinction of a language is disappearance of a culture, nation and a century of civilization,” he said, pledging to continue protecting endangered languages together with the international community.

In the joint event on Monday, representatives from the Ministry of Foreign Affairs; KNCU; ambassadors of Mexico, India, Rwanda, Switzerland, Bulgaria and the Dominican Republic; diplomats, academics and members of cultural and social organizations attended the event.

Earlier in the morning, the Bangladesh Embassy paid homage to the language martyrs by placing floral wreaths at the Shaheed Minar monument of Multicultural Park in Ansan, Gyeonggi Province. The embassy’s national flag flew at half-mast and staff observed a one-minute silence.

Embassy officials also offered a special prayer for the martyrs; read messages from the Bangladesh president, prime minister and foreign minister; screened a documentary and held discussions on the historical background and significance of the day.