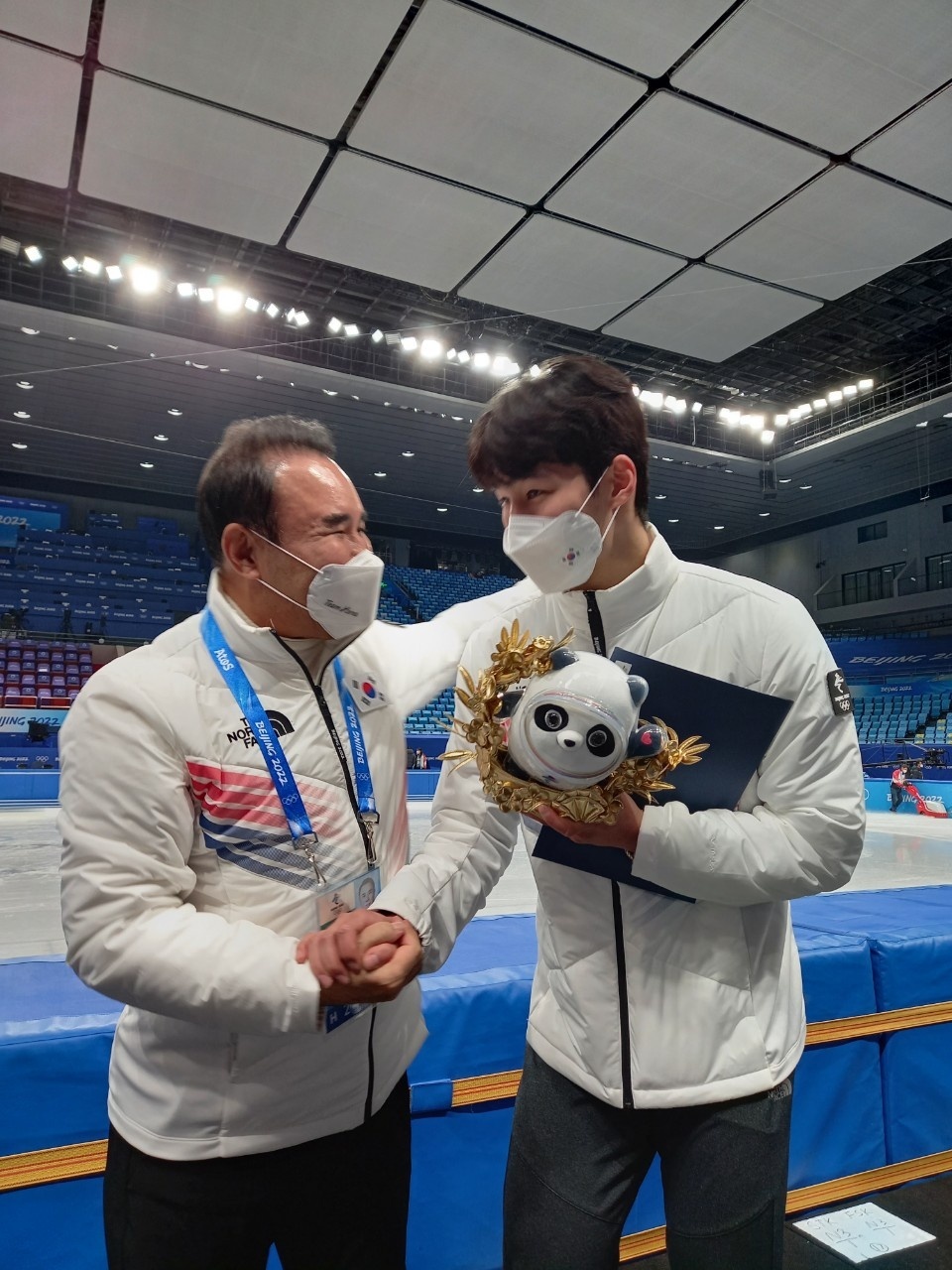 BBQ Genesis CEO Yoon Hong-geun poses with short track speedskating medalist Hwang Dae-heon on Feb. 9 at the Olympics speedskating rink in Beijing. (BBQ Genesis)
South Korean medalists have shown excitement at not only winning medals, but also free chicken for the rest of their lives.

Yoon promised to give free chicken for the country’s short track speedskating medalists Hwang Dae-heon and Choi Min-jeong at their requests.

“We are in the process of deciding how to give free chicken to the two medalists. It is highly likely we will give free chicken coupons once a day just like we did for the Youtube channel Negowang in 2020,” said an official from Genesis BBQ.

In one Negowang video, K-Pop idol and entertainer Hwang Gwang-hee negotiated an agreement with the company to give free chicken coupons every day to the subscriber who came up with a new name for Genesis BBQ’s Maple Butter Garlic Chicken.

Hwang Dae-heon, who won the gold in the men’s 1,500 meters and a silver in the 5,000-meter relay said, “The first thing I want to do is confirm that my chicken pension is real,” during an interview with reporters after winning the medals.

Yoon posted on Instagram that he had offered Hwang the chicken pension for fun. “And he really came back with a gold around his neck,” Yoon wrote.

Choi, who also won the gold in the women’s 1,500 meters and silver medals in the 1,000-meter and 3,000-meter relays, told reporters, “I have so many things I want to eat (when I return to Korea) and I’d like to eat chicken -- in particular, (Genesis) BBQ’s Golden Olive Chicken.”

According to media reports, Choi personally asked Yoon if she could get free chicken like Hwang. Yoon said he will seriously consider it.

“Olympic players have mentioned fried chicken as Korean soul food they miss the most (when they’re away from home). I think they’re more excited to get free chicken than to receive an Olympics cash prize from our company,” the official said.

Piggybacking on Olympic medalists’ cravings for free chicken, Genesis BBQ has seen a surge in sales revenue of its Golden Olive Chicken by 30 percent, the official added. “Sales of Golden Olive Chicken Drumstick, Hwang’s favorite menu item, has skyrocketed by over 50 percent.”