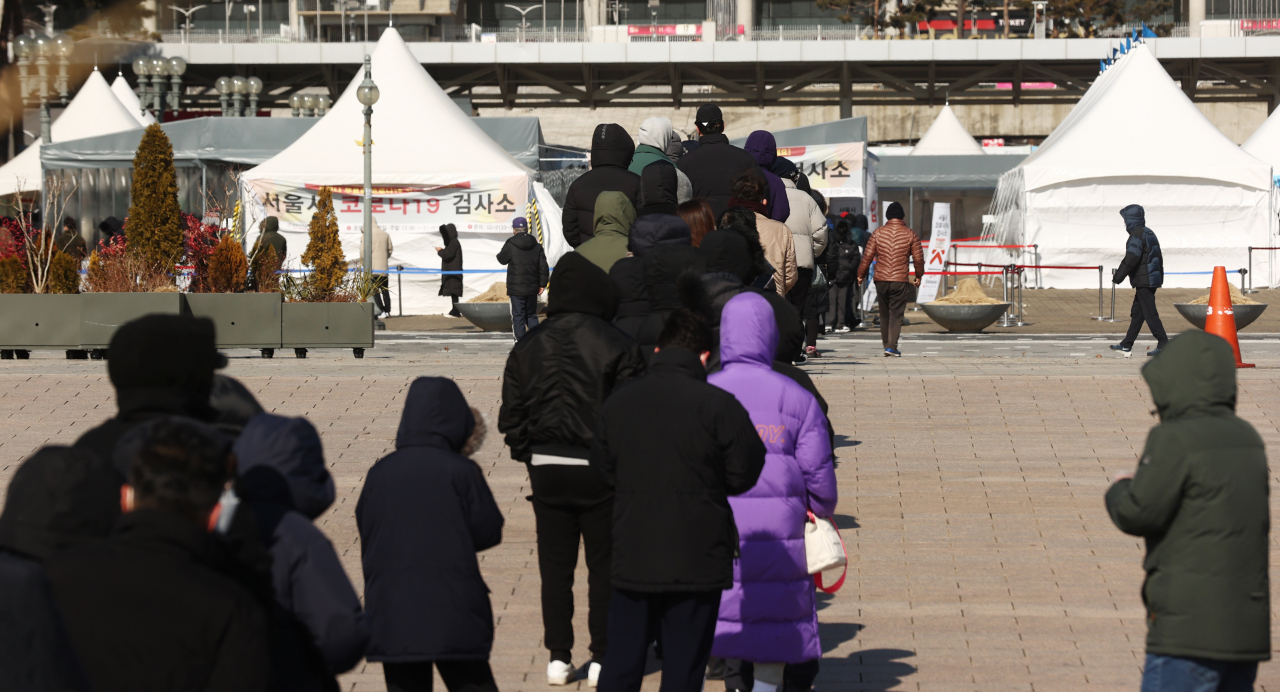 People line up to get tested for COVID-19 at a makeshift clinic on Sunday. (Yonhap)
South Korea logged fewer than 100,000 daily coronavirus cases Monday, due to less testing over the weekend, while health authorities forecast the current COVID-19 wave to peak between late February and March.

The country reported 95,362 new COVID-19 infections, including 95,218 local cases, raising the total caseload to 2,058,184, according to the Korea Disease Control and Prevention Agency (KDCA).

Monday's tally is down from 104,829 on Sunday when the country's new caseload surpassed 100,000 for the third day in a row. The number of new daily cases usually shrinks at the beginning of the week due to less testing over the weekend.

The total cases surpassed the 2 million mark about two years after the country reported its first COVID-19 case in January 2020.

The country has seen the caseload doubling more quickly amid the fast spread of the highly transmissible omicron variant.

Health authorities forecast that the current wave is likely to peak between the end of this month, with the daily caseload expected to reach 140,000-270,000.

"The COVID-19 peak can reach a maximum of 270,000 (new daily cases) in the middle to the end of March," KDCA Commissioner Jeong Eun-kyeong said during a press briefing.

The government said the daily counts may reach 170,000 starting early next month and the number of critically ill COVID-19 patients is likely to exceed 1,000 from the current 400 range.

The upsurge in virus cases is attributable to the omicron variant that became the dominant strain in South Korea in late January.

A total of 7,292 people were infected with the omicron variant between Feb. 13 and Saturday, bringing the total caseload to 38,859, the KDCA said.

The risk level of the pandemic in the country over the past week has been at the highest level for five weeks in a row, the KDCA said. The country introduced a new five-tier assessment system to evaluate the risk level of COVID-19 on a weekly basis.

Despite the virus surge, the government decided Friday to extend the business hour curfews for cafes and restaurants by one hour to 10 p.m. in a bid to support pandemic-hit merchants.

The partially relaxed antivirus curbs, which took effect Saturday, will be in place until March 13, with the cap on private gatherings unchanged at six people.

The number of patients receiving at-home treatment also rose to a fresh high of 450,493 as of midnight Sunday.

In a move to better manage the situation under the current medical system, the authorities decided to begin prescribing Paxlovid antiviral treatment pills to COVID-19 patients in their 40s with underlying diseases.

Currently, oral pills by Pfizer Inc. are being prescribed only to people aged 60 and older, those with compromised immune systems and people in their 50s with underlying diseases.

The authorities said 81.1 percent of people who took Paxlovid had their symptoms improve.

As of Monday, 30.46 million people, or 59.4 percent of the country's 52 million population, had received booster shots. The number of fully vaccinated people came to 44.3 million, accounting for 86.3 percent, the KDCA said.

Starting earlier in the day, reservations for COVID-19 vaccines by U.S.-based biotechnology company Novavax Inc. began among members of the general population.

The Novavax vaccine became available in South Korea after being manufactured at home by local vaccine developer SK Bioscience Co. following the government's authorization of its use last month.

Of the locally transmitted cases reported, Seoul reported 19,957 new cases. The surrounding Gyeonggi Province and the western city of Incheon added 26,777 and 7,362 new infections, respectively. Cases from overseas went up 144 to 28,244. (Yonhap)