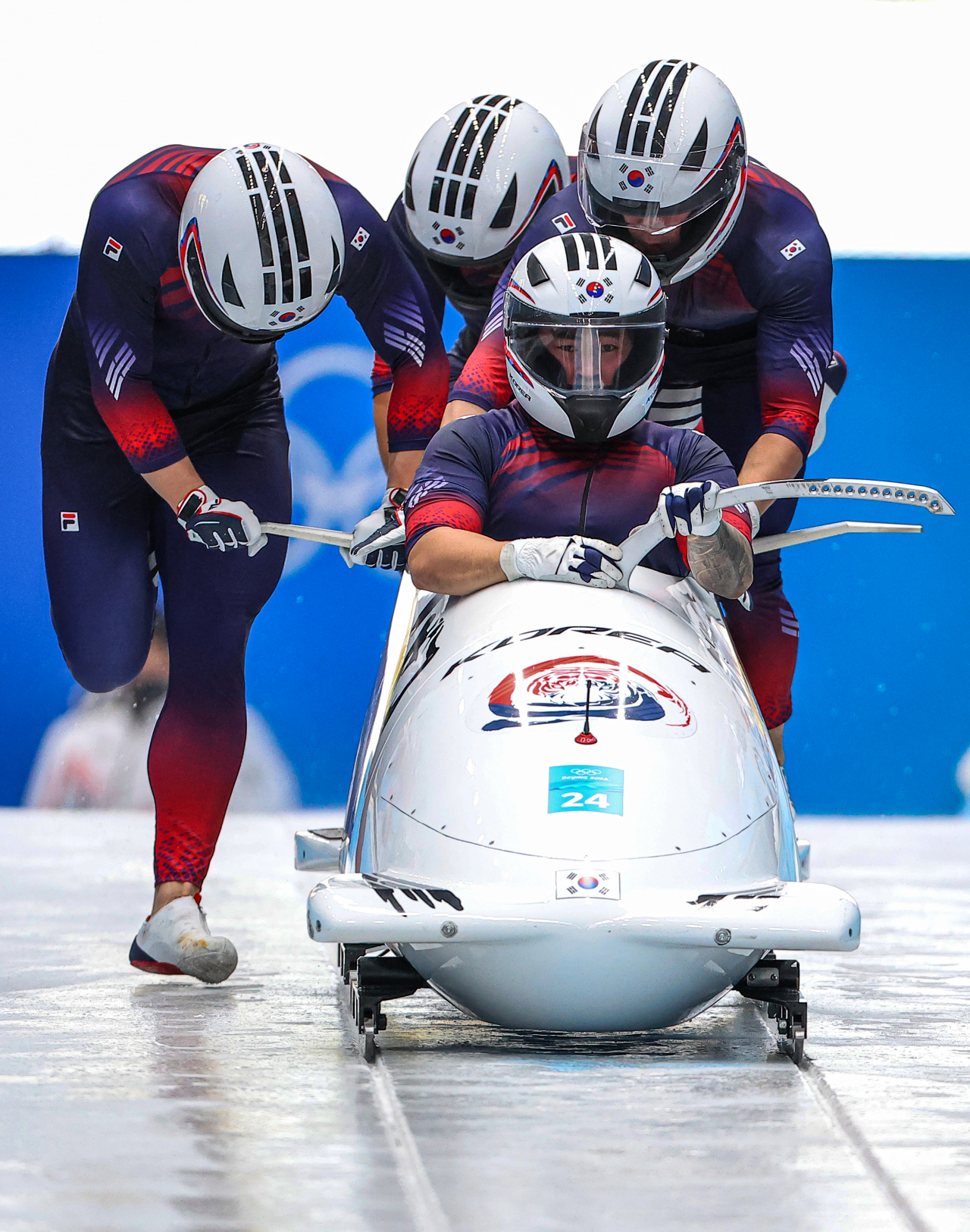 In this Associated Press photo, a South Korean bobsleigh team, piloted by Won Yun-jong (front), comes to the finish area after the third run of the four-man competition at the Beijing Winter Olympics at Yanqing National Sliding Centre in Yanqing District, northwestern Beijing, on Sunday. (Yonhap)

BEIJING -- There was no last-day magic this time, as the South Korean bobsleigh pilot Won Yun-jong failed to take his four-man team to the podium on Sunday in Beijing as he had done four years ago on home soil.

The first two runs took place on Saturday and the final two runs were held Sunday, the last day of the Winter Games in the Chinese capital.

This was the last event involving South Korean athletes at Beijing 2022. The country finished with two gold, five silver and two bronze medals.

In February 2018, Won and his four-man team grabbed a surprise silver medal on the final day of the PyeongChang Winter Olympics. This year, though, Won was missing his longtime brakeman Seo Young-woo, sidelined with an ankle injury, and he and his new teammates never got into a groove.

"We tried our best to overcome so many difficulties, but things didn't go our way," Won said. "It was a series of one problem after another, and it took a mental toll on all of us. Hopefully, we'll be able to take this as an opportunity to grow."

Won thanked Seo for his support from back home and added, "It breaks my heart not to be here with him. I am sorry that we couldn't bring him a better result."

In the months leading up to PyeongChang 2018, Won enjoyed full access to the Olympic Sliding Centre for training, and that advantage resulted in South Korea's first Olympic medal in bobsleigh.

That same Olympic track, however, has been abandoned because of high maintenance costs. Won said he'd like to see the venue back in operation.

"If you have a complete understanding of one particular track, it will help you compete on other tracks, too," Won said. "We should be able to improve if we train consistently in PyeongChang and gain more international experience."

Another South Korean team, with pilot Suk Young-jin joined by Kim Hyeong-geun, Kim Tae-yang and Shin Ye-chan, finished in 25th place. They posted 2:59.96 after three runs, and didn't qualify for the final run, which was only open to the top-20 teams after three runs down the track.

Suk was also missing his trusted brakeman, Jang Ki-kun, who tested positive for COVID-19 just before the Olympics. Suk had been competing with Jang in both the four-man and two-man races since the 2016-2017 season, but Kim Hyeong-geun had to step in at the last minute here.

Suk had made his Olympic debut as a brakeman in 2014 but missed out on PyeongChang. Beijing was his first Winter Games as a pilot.

"This was a dream come true," Suk said, after carrying a photo of Jang inside his sled for the races. "I know I didn't put up great times. But I gave it everything I had and I have no problem with the results."

Francesco Friedrich of Germany led his team to gold in 3:54.30, 0.37 second faster than another German squad, piloted by Johannes Lochner. Justin Kripps of Canada took the bronze medal. (Yonhap)