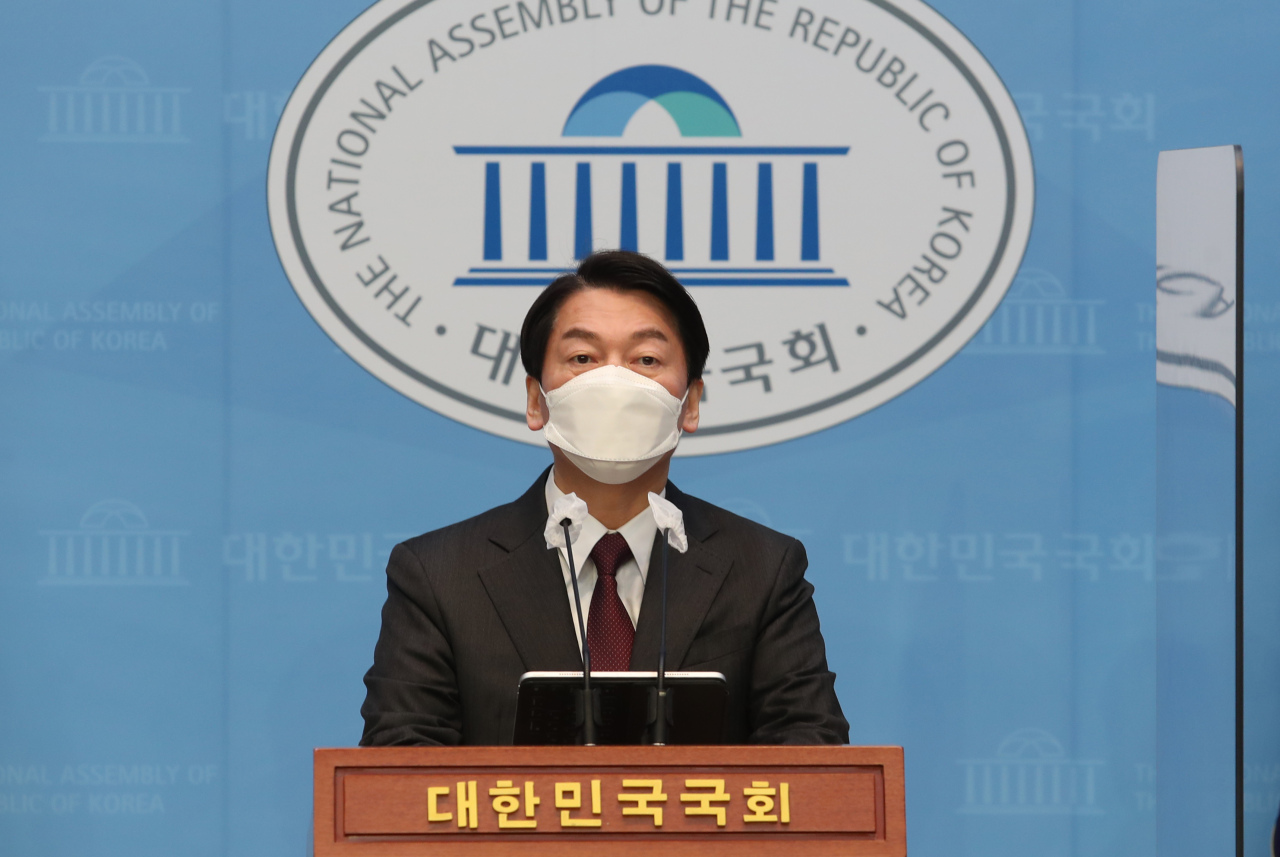 The presidential candidate said in an emergency press briefing Sunday that he will no longer wait for Yoon to respond to his offer to unify their candidacy as the opposition bloc from a week earlier, as it became evident that the People Power Party is not interested in the idea whatsoever.

"A week ago, I made an offer to unify my candidacy with the opposition bloc to bring a better shift in power, even if that would make people criticize and mock me for trying to drop out again," Ahn said during the briefing.

"But candidate Yoon did not make any response to my offer. Although I publicly revealed my opinion through a press conference, some in the main opposition party jumped in to undermine the sincerity of my merger offer and distorted the meaning behind it."

Ahn on Feb. 13 publicly suggested the two sides field a single candidate to take on Lee Jae-myung of the ruling Democratic Party of Korea for the March 9 election, asking they choose between him and Yoon through a public opinion survey as the two parties did in last year's mayoral by-elections.

Yoon did not make an official response to Ahn's offer himself, but the party essentially ignored the offer and downplayed its feasibility and fairness. Its officials added the proposed survey is not under consideration, especially when Yoon was shown in recent polls as the leading candidate.

A poll of 1,012 voters from Embrain Public, Kstat Research and Hankook Research conducted from Monday to Wednesday showed Yoon in the lead with 40 percent, followed by Lee with 31 percent and Ahn with 8 percent.

Based on the strong lead, People Power Party Chairman Lee Jun-seok made it clear that negotiations, let alone the merger, will not happen if Ahn wants to make demands, emphasizing Ahn should concede voluntarily.

"I think candidate Ahn and his aides expect us to make promises and raise his political prestige," the chairman said in a KBS interview Sunday. "But it is strictly against the law for candidate Ahn to give up the race in exchange for us making an offer to him."

Lee Jun-seok said if a merger is made, it should be advanced enough to be quickly and permanently resolved. He said discussions for merging candidacies should include talks on merging the two parties fully as well.

"From what I know, the People’s Party is not considering merging parties, even if candidate Ahn gives up the race," he added. "I believe that means (the People’s Party) wants to start another discussion on a merger for the regional elections, to which I am strongly opposed."

Rumors of a merger have been circulating for months, but momentum grew in the past week after Ahn's campaign team mourned the death of a local campaign chief and a bus driver who were found dead Tuesday inside a campaign vehicle from inhaling toxic gas.

Ahn said in a live YouTube stream Saturday that he believes it is his historical duty to finish the race as a means of fulfilling their desires, emphasizing "their sacrifices should never be wasted in vain."

Following the announcement, Ahn resumed his campaign efforts Saturday by providing medical volunteer services at a public health center in Jung-gu, central Seoul. He continued his campaign Sunday in the college town area of Mapo-gu, western Seoul, to impress young voters and proprietors.

Yet many considered the merger still a possibility, as Ahn’s camp was likely to suffer major financial setbacks if they continue the campaign and spend funds on promotions despite low prospects of reimbursement.

Chances still remain nonetheless for the two parties to reopen talks on a merger. A full week remains before the National Election Commission starts printing out the ballots on Feb. 28 ahead of the election on March 9.

According to the National Election Commission, Ahn has not registered to make a speech on TV or radio for the upcoming election, even though registration opened on Feb. 8. Lee registered 34 speeches, while Yoon registered for 22.

The People's Party said Ahn did not register with the election watchdog to make a broadcast media speech as part of his campaign strategy to focus on "new media," but it is in sharp contrast to what Ahn had done when running for the previous presidential election.

In 2017, Ahn registered to deliver 44 speeches on broadcast media, the most a candidate can register with the election authority in accordance with the Public Official Election Act.

Ahn was one of the three leading candidates in the race then, which gave him assurance to spend cash in making televised speeches. He was polling well above 15 percent, which meant a high probability of full reimbursement for his campaign spending.

The candidate ultimately recorded 21.41 percent of votes, earning the full reimbursement by passing the 15 percent requirement set by the National Election Commission.

The situation is markedly different for Ahn in the current race, as his support ratings remain weak, making his chances of getting a full reimbursement unlikely. Reimbursement is not available to candidates getting less than 10 percent of votes.

On-air time is a highly expensive portion of the campaign budget, costing hundreds of millions of won for just 20 minutes. The cost is greater for primetime, and leading candidates usually end up spending billions of won just to appear on TV or radio before the election.