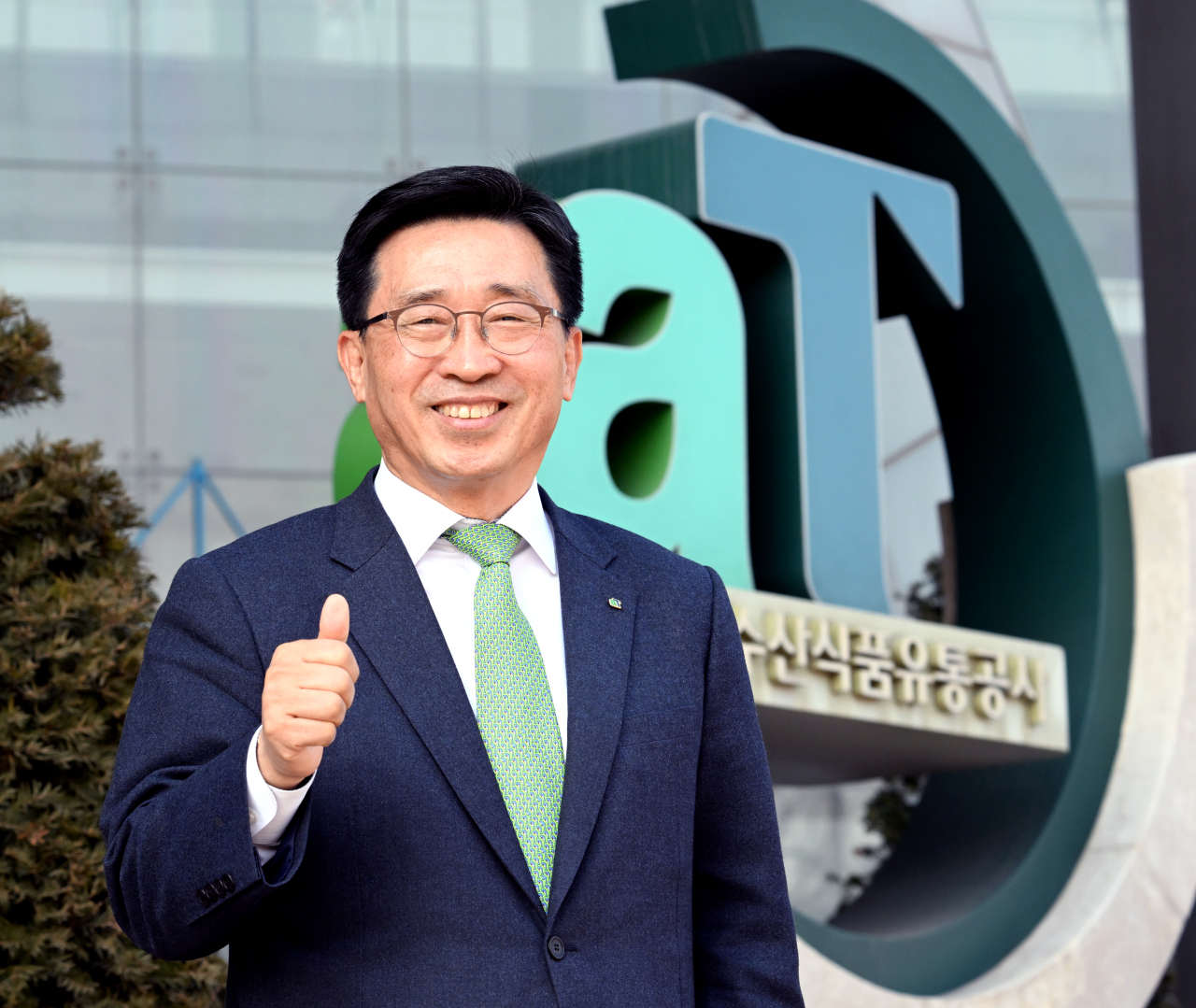 Kim Choon-jin, president of Korea Agro-Fisheries & Food Trade Corp., poses during an interview with The Korea Herald in Seoul on Feb. 10. (Park Hyun-koo/The Korea Herald)
Going green is not just about having more electric vehicles or shutting down old factories powered by fossil fuels, says the head of South Korea’s food distribution and export promotion agency, but also extending that eco-friendly thinking to the table.

Kim and his agency have been taking an initiative titled “Korea Green Food Day,“ an in-house campaign aimed at promoting green awareness on what we eat. It urges consumers to consume eco-friendlier crops and livestock that produce less CO2 in the cultivation and farming process, and by minimizing leftover food.

aT started with making small changes at the state company’s restaurant. The total amount of CO2 was reduced by 59 percent to 67.7 kilograms on average on the campaign day -- every Thursday -- compared to other weekdays, according to Kim. The calculation added the amount of greenhouse gas reduced by purchasing food produced within close distances and grown through low-carbon methods.

“Imagine what we can do to our planet if people around the globe join our campaign. Of course, the UN has already launched a similar campaign, but their slogan is limited to just cutting down on food wastes,” said Kim in an interview with The Korea Herald on Feb. 10.

“So we need to take initiative and promote the global version of Korea Green Food Day campaign.”

To bring the Korean version of the green food campaign to the world, the agency has recently forged a partnership with China’s largest department store chain, Parkson Retail Group, and the US retail giant H Mart to designate a day to eat sustainably there. The agency is also in talks with Chinese global e-commerce platform Alibaba’s Tmall.

Kim has met with ambassadors in Korea from countries such as Egypt, Oman, Tajikistan, and Cambodia to introduce the campaign and call for support for the adoption of Global Green Food Day in their countries.

“We plan to expand our global partnership by partnering up with World Federation of Overseas Korean Traders Associations that has 138 branches in 64 countries, and global retail firms in the US, China, and Vietnam,” Kim said.

Kim says there is still a lack of public awareness of the impact of food on the Earth.

Citing data from the Food and Agriculture Organization of the UN, Kim said food leftovers amount to one-third the total of food produced worldwide. A person annually generates 134 kilograms of food waste in Korea and 222 kilograms of CO2 is released in the processing stage.

Providing general information on how food is produced is important. People might think twice if they learn that consuming pork or chicken can be a greener choice than beef, according to Kim.

Among livestock products, manufacturing beef is particularly harmful to the environment -- 25.6 kilograms of CO2 is produced in order to produce 1 kilogram of beef, he said, citing data from the US Natural Resources Defense Council.

Instead of beef, consuming pork or chicken could be beneficial for the environment, since they take up less land and water, and produce less CO2 than manufactured beef, Kim said.

In addition, it is better to purchase government-certified eco-friendly crops that have minimal use of toxic and chemical fertilizers or have implemented agricultural techniques that reduce greenhouse gas, he said.

Promoting food mileage -- the distance food has traveled from where its grown to arrive at markets or restaurants -- on product labels, can help people make wiser choices, he added.

The global supply disruption triggered by the pandemic has ironically become a chance to increase Korea’s dependence on locally grown food. And this has motivated him to push his green food agenda more.

“Korea, for example, imports around 80 percent of grains such as wheat, bean, and corn. But the shipment fiasco prompted by the pandemic has caused challenges in importing food,” he said.

“So I’ve thought of the ways to prevent such problems in the future and came up with the campaign that makes us less dependent on food imports. This can bolster efforts in building a sustainable food supply system."