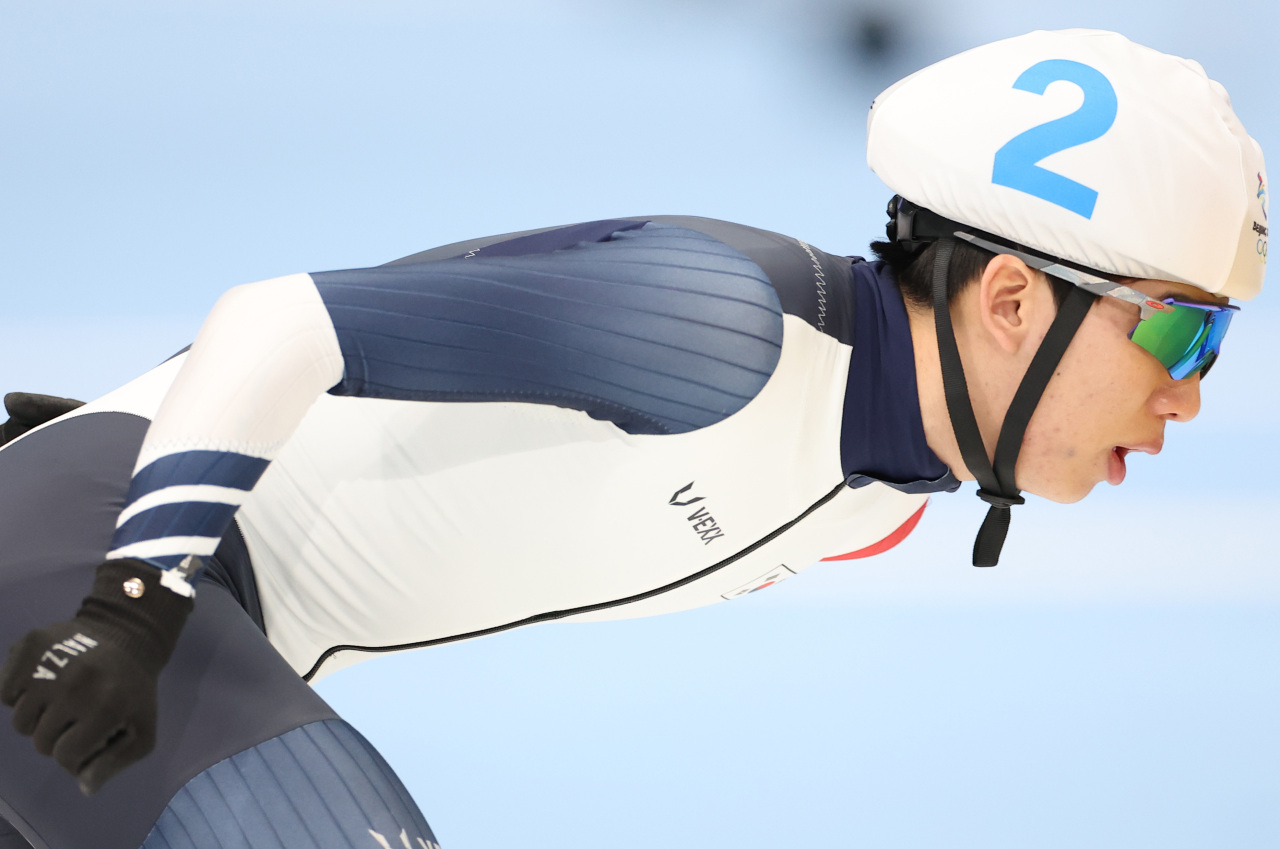 Speed skater Chung Jae-won competes in the semifinals of men`s mass start in speed skating at the Beijing Olympics at the National Speed Skating Oval in Beijing Saturday. (Yonhap)
Chung Jae-won was born in the first year of the 21st century, a bundle of speed skating potential waiting to be tapped.

The first glimpse of that talent came four years ago at PyeongChang 2018, when Chung, all of 16, earned the silver medal in the men’s team pursuit.

A fuller realization occurred Saturday in Beijing, where Chung, still four months away from his 21st birthday, skated to the silver medal in the men’s mass start. At 7:47.18, Chung finished 0.07 bacK of the champion, Bart Swings of Belgium, and 0.02 second faster than his teammate, Lee Seung-hoon.

This was his first individual Olympic medal, coming as it did in the same event where he‘d played second fiddle in 2018.

In the mass start at PyeongChang, Chung acted as a pacemaker for Lee, who went on to capture the gold medal. Lee and the men’s coaching staff were later criticized for forcing Chung, then the youngest member of the national team, to make sacrifices to help

Lee get his medal. Chung‘s assertion that he was never asked to do anything against his will mostly fell on deaf ears.

With Lee slowing down in the ensuing years as he entered his 30s, Chung has been developing into a force of his own, ready to take the torch from Lee, a four-time Olympian.

By the time the two arrived in Beijing, there was no talk of who would be a pacemaker for whom. Chung was seen as an even bigger medal threat than Lee.

And the passing of the torch took place at the National Speed Skating Oval on Saturday. That Chung caught Lee over the final straightaway and nipped him at the line for a scintillating finish made the passing part more literal.

Chung and Lee had won that team pursuit silver together four years ago, but their bid for a second straight medal in that event went awry earlier this week, as they, along with a third member, Kim Min-seok, got knocked out of the quarterfinals.