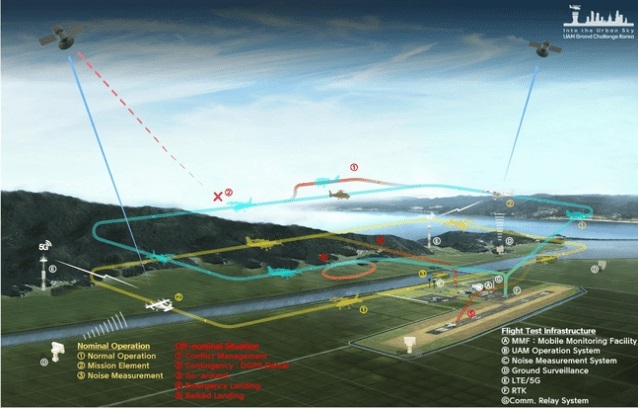 A blueprint of Transport Ministry's K-UAM demonstration of test operation of Urban Air Mobility in Goheung, South Jeolla Province. (MOLIT)
Under the South Korean government’s plan to commercialize flying cars, or Urban Air Mobility, in central cities by 2025, the Transport Ministry on Thursday kicked off the K-UAM Grand Challenge program to coordinate all of South Korea’s UAM-related activities as part of its focus to enable emerging aviation markets.

This Ministry-led program will bring together industry players including aircraft developers, airspace designers, and air traffic management operators with the goal of developing and operating air vehicles or airspace management services in the UAM ecosystem. The industry players will jointly run a demo test of UAM at Korea’s first UAM test bed, located in South Jeolla Province.

The K-UAM Grand Challenge program is joined by the Korea Aerospace Research Institute and 124 companies including Hyundai Motor Group and Korean Air who are part of UAM Team Korea. Also participating are foreign UAM stakeholders like Joby Aviation, Volocopter and Skyport, as well as global institutions like NASA who will lead tests on capabilities and readiness of vehicles and systems that could revolutionize mobility.

“Through the K-UAM Grand Challenge, we will have practical proof of validated operation for UAM and commercialization of UAM services. Such outcomes will create a new, competitive and international traffic management system in Korea,” said Hwang Seong-kyu, second vice transport minister.

According to the ministry, it plans to evaluate the safety of UAM aircraft, establish technical standards, demonstrate operation of Vertiports and discuss the budget and cost liability of K-UAM services through a demonstration test in Goheung, South Jeolla Province by 2024. In 2020, the government selected Goheung’s state-run aircraft performance test center, located on a site spanning over 380 square kilometers, as a test bed for K-UAM commercialization.

Industry insiders say that the government‘s drive can become a catalyst for the development of emerging air transportation systems.

“In a country where no certified UAM aircrafts exist, companies and authorities here hope to see the K-UAM Grand Challenge shift the timeframe and speed up validating UAM commercialization,” an industry insider told The Korea Herald.

According to the Transport Ministry, it will prioritize the introduction of air medical services, such as patient ambulance transportation and cargo delivery to underserviced communities, starting with gradually replacing helicopter demand with UAM aircrafts in the defense sector.

They also want to develop tourism UAM services and set up UAM theme parks with help of local governments and public institutions to raise public awareness about UAM.

“Our goal is to check validation of safety for UAM operations. It is necessary to check if UAM aircrafts can fly with other aircrafts and drones. That’s why we need to also establish related legislations, make legal revisions, and create related licenses,” said Nah Jin-hang, director of drone transport division at the transport ministry. “Once all those processes are completed, it will increase public acceptance of this new concept vehicle,” he added.

According to the concept of operation unveiled Thursday, pilots will be onboard during UAM aircrafts‘ flight through pre-designated and fixed corridors. In 2025, four Vertiports are expected to be set up at public buildings such as firefighting stations and hospitals with two purpose-navigation routes. They will run 11 times a day with a cost of 3,000 won ($2.50) per kilometer per person. The number of expected Vertiports will expand to 52 with some 203 fixed routes, running more than 43,000 times a day at a rate of 1,300 won per kilometer per person.

Collaborating with industry for future research and demonstration efforts for UAM has been a relatively common concept among other countries.

In 2019, NASA kicked off its UAM Grand Challenge program to conduct field tests in urban environments with select participants, with the goal to understand what will be required to achieve a mature UAM ecosystem capable of operating efficiently in dense urban environments. In the following year, NASA signed Space Act Agreements with 17 companies in the aviation industry, as the first in a series of technology demonstrations.